Lung Lung Thun is one of the rare breed of women watch collectors. She researches the history of individual watches. She discusses watches, she understands watches and she buys watches – often larger men’s watches with complicated mechanical movements. She recently bought her first vintage Patek Philippe – the 3970 – a wildly expensive perpetual calendar chronograph designed for men, and she is delighted with it. “Once you get into vintage, and vintage Patek, you can never go back again,” she says.

Turning 32 in August, and a financier who runs her own brokerage in Hong Kong, Thun says watch brands have too often failed to provide women watch enthusiasts with substantial models tailored to their requirements  – with technically-advanced movements rather than simple quartz inner works. 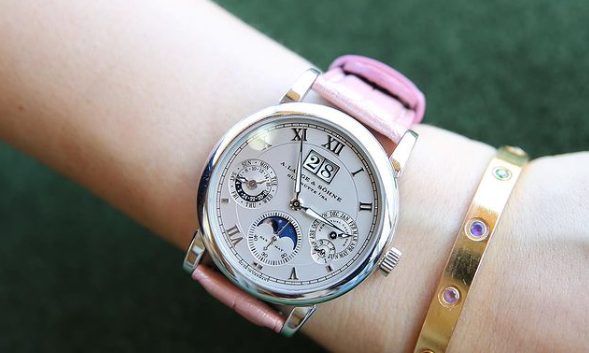 An image of an A. Lange and Sohne watch tweeted by Lung Lung Thun

“For a super-long time already, people have been complaining to brands saying, ‘it’s unfair that you create female watches like this, it’s just quartz, you don’t think about it’,” she says, adding there had been varying excuses over the years. One was that the smaller sizes often wanted by women limited the size of the power reserves that could be squeezed into the watch’s case. “Now that guys want smaller watches and they seem to have figured it out,” she says.

Brands have tended to regard women’s watches as jewellery that tells the time – an afterthought that too often married gold and gems with a cheap quartz movement. Enthusiasts like Thun now demand more than that: they want in-house movements, interesting complications, and design that goes beyond the merely decorative. So, often, they buy so-called men’s watches.

Physically petite women bankers and lawyers wear unobtainable 43mm Rolex Sea-Dwellers or Daytonas, or alternatively a chunk of G-Shock. They take men on at their own game and beat them with the unspoken message: “I have a watch that was designed for you, and I look better wearing it than you ever will”.

When Thun bought her 37mm Audemars Piguet in 2018, many watch brands were still categorising their collections by gender, she says, and advertising lines like “right for her” were often used to sell women’s watches. Watch marketing has shifted since then, she says, and she appreciates the growing understanding of many women collectors’  choices.

She started seriously buying watches in 2012, shortly after she graduated from university in the UK. Then, after she moved from Singapore to Hong Kong about three and a half years ago, she began to moderate her purchases, trying to keep the number of watches she owns down to seven. Her enthusiasm for wristwatches takes time, researching and reading, and she needs to stay abreast of current trends because she is now one of the hosts of the watch podcast The Waiting List.

Nora Taylor, 34, deputy editor of the popular Hodinkee watch website which features both editorial and e-commerce, says the division between men’s and women’s watches is outdated and there is an increasing belief that both men and women can wear any sort or size of watch they choose to.

If a watch enthusiast likes a watch’s “elements”, if she (or he) likes the size, and if it sits well on the wrist, it doesn’t matter whether it’s a huge, attention-grabbing Hublot or a smaller and more delicate vintage piece, Taylor says, it shouldn’t matter whether the wearer is male or female. Size is no longer the determinant of who should wear which watch.

Some enthusiasts believe gender labels should be eliminated entirely from the watch world, and certain brands have done that, she adds, while there are others who say so-called feminine elements can be part of a traditionally-marketed men’s watch. “A lot of brands release ladies’ watches, but some of them don’t,” Taylor says. “We just ran a piece in our magazine with a beautiful couple, the man wearing a woman’s watch and the woman wearing a man’s watch.”

She hopes that increasing numbers of women will feel open to shrugging off traditional expectations as time goes by.

“We still have a long way to go in parity and who is represented in the industry and is considered a giant in the industry, or a tastemaker, or an expert,” she says. “The community of women and watches has always been there, and now it is growing and finding new audiences on TikTok and Instagram.”

If women on social media see a woman wearing, say, a Royal Oak, she adds, and it’s huge and it looks great on her, they may be inspired to try one on and even buy one.

Canadian student Jaclyn Li, 23, another host at The Waiting List podcast (which is downloaded 30-40,000 times a month), has been a serious watch collector since 2019. She thinks men are generally more interested in watches and, particularly, watch collecting, because they are far more limited in their choices of valuable accessories.

Women can wear rings, bracelets, earrings, necklaces, and a host of other types of jewellery and fashion accessories, whereas professional men have a far smaller range of choices. Most men can only express their individuality in shoe, cufflink and watch choice, she adds.

While increasing numbers of women are choosing to wear men’s watches, or the women’s version of large and bulky so-called tool watches, Li thinks the interest is more about the technical developments in watch movements rather than simply a fashion for size or chunkiness. “I do see more and more ladies getting interested in the horological advancements, or the horological histories of brands,” she says.

She personally has bought 45 to 50 watches, sold some, and she now owns about 25. She now tries to enforce a “one in, one out” rule to keep her collection to a manageable number.

Li  recently purchased a 39.5 mm chronograph from A. Lange & Sohne’s 1815 collection. “I’ve always been restrained by size, I never thought I would be able to go above 38,” she says. “But this watch; it gives me a new perspective. This was a very new experience for me and I kind of like it.”