Champion of the cause

A group of wealthy and respectable middle-class Sydney women gathered in a tea room in the 1890s, where they “sat by favour of that Chinese gentleman” Quong Tart while they considered how best to fight for the right to vote, a movement that was gaining ground in England.

Writing in the Sydney Morning Herald decades later, Maybanke Anderson, one of Sydney’s prominent women’s activists, remembered the moment in 1891 when she and a comrade, Rose Scott, “first spoke a few words on the subject of women’s suffrage” in one of Quong Tart’s tea rooms. By the 1890s, women around the world had been fighting for the vote for years, and they would keep up the struggle for many more years, beaten, arrested, sent to prison, force-fed when they went on hunger strikes.

Australia, after New Zealand, was one of the first nations in the world to allow women to vote in elections, first in individual states, and federally in 1902.

And Quong Tart’s elegantly appointed tea rooms in Sydney’s King Street, and later in the still standing Queen Victoria Building and elsewhere in the city, were important venues for Australian women’s early discussions on the battle for universal suffrage. 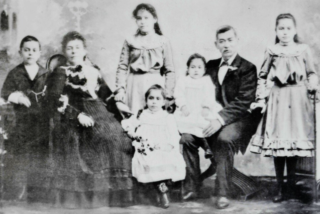 Quong Tart with his wife and children.

Mei Quong Tart had arrived in Australia from Taishan in Guangdong as an enterprising nine-year-old in 1859, accompanying his uncle who was headed to the gold fields. Taken in first by a Scottish shopkeeper and then an English family, Quong Tart learned to speak fluent English (with a Scottish brogue if he felt like it), did well with gold claims in his youth, dropped the name Mei, and prospered.

In 1881, he returned to Taishan, near Macau, to see his relatives, and he visited Canton (now Guangdong) and Nanking (now Nanjing) to establish a tea import business. On his return to Australia he set up tea shops so his customers could sample his wares. The tea shops were immediately popular and evolved into his famed tea rooms, fitted out with fountains, ponds of carp and upstairs reading rooms. At the age of 36, Quong Tart married a young English woman, Margaret Scarlett, and they went on to have six children.

In a memoir written after his death, his wife remembered how Quong Tart had established venues particularly for women in his elegant and elaborate tea rooms.

“On the first floor of the King Street premises a reading room was established, and tastefully supplied with journals and magazines of interest to ladies, also writing materials, so that if one desired to write a letter or address a parcel, the means were at hand, free of cost, and this great convenience was much appreciated by visitors.”

In the late 1800s in Australia, wealthier women were constrained. There were few places they could mingle with ease; they couldn’t even walk on the streets unaccompanied. Meetings were possible in one another’s houses, but there they could be observed and overheard. Quong Tart’s tea rooms became the venue of choice for all manner of meetings.

“Quong Tart’s invitation to host women’s suffrage meetings in his tearooms was enormously important in the Womanhood Suffrage League getting a toe-hold in NSW,” says Clare Wright, professor of history at La Trobe University in Melbourne, and the author of You Daughters of Freedom: the Australians Who Won the Vote and Inspired the World.

“In the late 19th century, it was not the done thing for respectable, middle-class women – from the ranks of which the early suffrage organisers were largely drawn — to be socially active outside their own homes, or the drawing rooms of other women in their set. What having a public venue for their meetings meant was that the issue of women’s enfranchisement was transformed from being a ‘domestic’ matter to a political matter.”

Quong Tart’s tearooms, she adds, were known as a place for noisy and topical meetings, held by lobby groups as diverse as Single Tax League, the Opium League (against the importation of opium) and various civic associations such as the Cyclists Union.

“Being discussed out in the open — though not on the streets, which is where ‘rough’ people gathered — made suffrage ‘in the national interest’, unlike other ‘feminine’ drawing-room activities such as piano recitals and poetry readings,” Wright says.

The Women’s Literary Society, founded in 1889, was the first women’s organisation ever to meet at night in Sydney, says historian Susan Magarey, professor emerita at Adelaide University in South Australia and the author of a number of histories, including Passions of the First Wave Feminists.

The women of the Literary Society met at Quong Tart’s Loong Shan Tea House in Sydney’s King Street. “Its members met on the first and third evenings of each month at eight o’clock,” Magarey adds. “Beginning with a small number of members, it had grown to 120 financial members by 1893.

“But it had stopped being concerned with women’s suffrage after a meeting early in 1891 at which Maybanke Wollstenholme (later Anderson) and Rose Scott raised the question of ‘woman suffrage’ as a matter for the Literary Society to consider, only to meet strong and outraged opposition: ‘an energetic and much-esteemed member rose and said, with white heat, that she hope we should never discuss such a disgraceful matter’.”

The outraged member was apparently concerned that giving women the right to vote would somehow lead to the amendment or elimination of marriage laws. 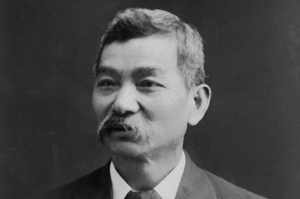 After that first thwarted effort, the Womanhood Suffrage League of NSW did subsequently meet at Quong Tart’s tea rooms, perhaps elsewhere in Sydney, Magarey says. Quong Tart had established tea rooms in the Royal Arcade, in the Sydney Arcade, at the Moore Park zoo and a flagship tearoom in the Queen Victoria Building, which had a large Elite Hall that could be hired for evening events.

As well as running the tea rooms, Quong Tart was still trading tea and he again voyaged to China, on one occasion with his wife and daughter, where he was received with great honour and awarded the title of Mandarin of the fifth degree.

In addition to being a successful entrepreneur, Quong Tart was a notable philanthropist. Concerned about his fellow Chinese immigrants, he campaigned against the importation of opium; he was involved the operation of Sydney’s soup kitchens, he paid for annual dinners at various asylums for the destitute and he fed and clothed children from the Waterloo Ragged School, as well as devising new and progressive plans for his employees, including paid sick leave.

Lisa Murray, City Historian with the City of Sydney, says Quong Tart had a range of philanthropic interests and concerns, and he was well connected with Sydney’s Chinese community.

“He could speak English very well, and he came across as a very amiable figure who was prepared to make the most of opportunities and make jokes and sing, and he was known for reciting poetry in a Scottish brogue,” she says. “He was obviously a very intelligent man and moved between societies.”

Like other historians, Murray believes Quong Tart and his tea rooms played an important role in the fight for women’s right to vote. “Quong Tart definitely created a space for women that was both a public and private space in a way, where they could meet and socialise,” she says. “I do believe that’s significant in Sydney’s history.”

Women across Australia were given the vote by the new nation in June 1902. A few months later, in August, Quong Tart, then 53, was brutally attacked in his office in the Queen Victoria Building by a thug wielding an iron bar. There was speculation it was more than a simple robbery, and perhaps connected with Quong Tart’s  commercial empire of tea rooms and tea importing. Nothing of that nature was ever proved, and the so-called “simple-minded thug” who attacked him was sentenced to 12 years in prison.

Quong Tart never fully recovered from the savage bashing and he died of pleurisy the following year, leaving his wife and his children – two sons and four daughters ranging in age from 16 to just a few months old.

His death was a huge blow to many who relied on him in Sydney, from his employees to the recipients of his welfare. Thousands of mourners went to his funeral to bid him farewell.

In her memoir, his wife – who married him against the wishes of her family – remembered him as an extraordinary man.

“Quong Tart”, she wrote, “had won from all classes, by his natural and genuine kindness, a character and name impossible to be bought for money.”