The wiry bird scuffling around in the mountainous jungles near the northern Thailand-Myanmar border doesn’t look like much, but this scrawny red jungle fowl has been tapped as the primary ancestor of the modern world’s all-important domestic chicken.

This  wild fowl’s descendants can be found on the tables of people everywhere, roasted with beans and potatos, glazed, grilled, skewered, stuffed, transformed into soups and stir-fries.

About 7,500 BC, when humans were learning how to cultivate edible plants and make primitive pottery, they began to tame and breed the red jungle fowl – a tree-roosting bird with a big and fluffy tail, a brightly-coloured comb and glossy brown neck feathers.

Cross-breeding and domestication of the jungle fowl over the centuries has given the world hundreds of types of domestic chicken, from the black-fleshed Silkie to the robust Jersey Giant, and a total population today of about 24 billion chickens. The domesticated descendants of the wild Asian jungle fowl are now humanity’s primary source of protein. 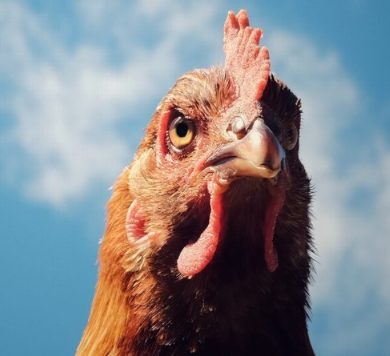 Research published in the scientific journal Cell Research in June pinpointed one particular subspecies of the red jungle fowl, the Gallus gallus spadiceus, as the modern chicken’s primary ancestor. It took genome sequencing to finally untangle the chicken’s multi-branching family tree, and experts believe the research findings will provide crucial data for the future health of the species.

A team of at least 50 scientists from around the world spent years on the study. First, samples were collected from the various species of jungle fowl, five subspecies of red jungle fowl, and from village chickens across southeast Asia for the landmark study. Next came the DNA sequencing and the analysis of 787 whole bird genomes.

Led by Professor Ming-shan Wang from theChinese Academy of Sciences’ Kunming Institute of Zoology, in their paper the collaborating scientists say the research not only pinpoints the particular subspecies which is the chicken’s chief ancestor, it contradicts previous theories that the modern chicken’s ancestors were first domesticated in northern China and in Pakistan’s Indus valley. Instead the scientists point to an area which includes parts of south-western China and northern Thailand and Myanmar.

Wang says despite extensive and numerous studies, the specific origins and evolution of the domestic chicken have long been in dispute.

In the 1880s, the father of evolution theory, scientist Charles Darwin, pointed to the red jungle fowl as the domestic chicken’s ancestor. He argued the modern chicken descended from that particular species of jungle fowl because of the species’ physical similarities, and because they can produce fertile chicks.

Yet five subspecies of the red jungle fowl can be found across Asia, and how and where domestication began, and which particular type became dominant, had never been fully probed.

“Understanding the domestication history of chicken is not only crucial to understanding where, when and how humans have domesticated and improved this species but also helps to illustrate our human history and agriculture development in the past,” Wang says.

In 2004, the genome of the chicken was one of the first to be sequenced of all domestic animals. “Domestic chickens are very important, and they are the most numerous domestic animals found in the world,” Wang adds.

The collaborators’ genetic investigation of the chicken’s ancestry was complicated by the interbreeding and overlapping ranges of jungle fowl and domestic chicken species over the centuries.

One of the study’s scientists, Dr Mukesh Thakur, of the Zoological Survey of India, had earlier written his doctoral thesis on the long-term interbreeding of red jungle fowl and the domestic chicken. He says it is relatively common to see domestic chickens in India feed in the same flocks as the wild fowl. This “silent gene swapping”, he says, could mean the original genetic make-up of the wild jungle fowl is being lost.

This interbreeding is sometimes deliberate, Wang says, pointing out that many Asian farmers improve the quality of village chicken flocks by breeding their domestic hens with wild jungle fowl roosters. “Some modern chickens, in particular the backyard village chickens found around the vicinities of the red jungle fowl’s distribution ranges in south and southeast Asia, look like the red jungle fowl, in terms of their plumage colour and pattern,” he says.

The wild jungle fowl genes, he adds, could become vital to the future health of the domestic chicken. Domestic chickens are far more productive in terms of meat and eggs than their wild fowl counterparts but they can be subject to a range of health problems including brittle bones, blindness, crippling leg disorders, and fluid build-up.

The massive gene-mapping project outlined in the Cell Research journal, Wang says, could provide important clues on future chicken breeding, including how to overcome unwanted and damaging genetic mutations.

Since the chicken as we know it today was first domesticated, humanity has enjoyed eating it and experimenting with different ways to cook it. Ancient Romans, according to a cookbook attributed to Marcus Gavius Apicius, enjoyed Pullum Frontonianum, chicken roasted with leeks, dill, oil, coriander seed and pepper.

A cookbook from the 1300s, known as Tractatus,notes a roasting chicken could be stuffed with a mixture of tender lean pork, bacon, chicken liver, hard-boiled eggs, parsley, sage and hyssop (a minty herb), with added white and black pepper, ginger and cinnamon, and eaten with verjuice or white wine poured over it.

A few centuries later, according to legend, the cook working for Napoleon cobbled together a tasty chicken dish after the French general’s narrow victory at Marengo in Italy in 1800. Probably devised elsewhere and named in honour of the victory, the dish consists of breast fillets cut into pieces, floured and sautéed, then cooked with onions, garlic, mushrooms, tomatos and stock, served on rice and garnished with a fried egg.

Boiled chicken was popular with Victorians; for one dish the chicken was wrapped with lemons in paper, boiled for five or six minutes, and then simmered for about an hour, served with white sauce and garnished with the yolk of a hard-boiled egg.

Until the late 19thcentury, chicken was not considered a mainstay meat; beef, pork and mutton were preferred. But as time wore on, the ease and speed of chicken breeding, the convenience of the chicken’s size – enough to feed one small family with no leftovers – and the tastiness and wide variety of chicken meals won over legions of supporters.

A chicken dish was especially devised to commemorate Queen Elizabeth’s ascension to the throne. Coronation chicken, as it is now widely known, consists of pieces of cooked chicken meat in a yellow, curry-flavoured mayonnaise sauce. Constance Spry, a principal of the Cordon Bleu cookery school in London at the time, came up with the recipe for the Queen’s coronation banquet.

These days, of course, chicken is everywhere, from processed nuggets at fast-food joints to the superior organically-reared fowls served at chic fine-dining establishments.

Emelyn Rude, the author of Tastes Like Chicken: A History of America’s Favorite Bird, says technological advances in factory farming for all species boosted poultry productionaround the world. These advances, she says, transformed chicken from the most expensive, most difficult-to-cook meat in the market to easy, cheap, and healthy sustenance.

“The US government was a primary driver for much of these changes,” she says. “During and after World War II they gave the growing chicken industry large financial support and even hosted their own breeding contest to produce a ‘juicer’ chicken. This contest actually helped produce the breed that is the ancestor of the vast majority of today’s industrial broilers.”

The chicken’s final victory came in recent decades, in the 60s and 70s, when health authorities around the world began warning against over-indulging in red meat – beef and pork – and suggesting consumers instead try leaner meat, like fish and chicken.

Yet the health promotion largely backfired in terms of chicken, Rude says. “Despite the emphasis on health, most of this increased consumption came in the form of processed chicken – the nuggets and chicken burgers of the world”.