At first glance it looks like something a clever kid might build with a toy engineering kit – a shoebox-sized metallic box sitting on stubby legs. But in reality, this box is a tiny Adelaide-built satellite, painstakingly constructed with technical precision and scientific expertise.

In coming weeks it is scheduled to orbit Earth at the rocketing speed of 7.5 kilometres a second, or 27,000 kilometres an hour, beginning a new age of Australian extra-terrestrial exploration.

NASA astronaut Andy Thomas led South Australia into space in 1996, when the Adelaide-born astronaut first zoomed over his hometown aboard the Space Shuttle Endeavour, and the city stayed up and turned the lights on to greet him as he sped by.

Work is underway on an interplanetary ion drive in Brompton, in Adelaide’s inner north. Academics at Adelaide University are working with international colleagues to hammer out a space manual for those tricky legal questions that might arise in space. Space start-ups are elbowing one another aside to get funding and acknowledgement. The 68th International Aeronautical Congress, the world’s biggest meeting of space experts with 3,500 delegates expected, will be held in Adelaide in September. The Southern Hemisphere Space Studies program, aligned with the International Space University and the University of South Australia, has just wound up its sixth year of teaching. And, with a miniature South Australian-built satellite blazing through the far reaches of space, the horizons are endless. 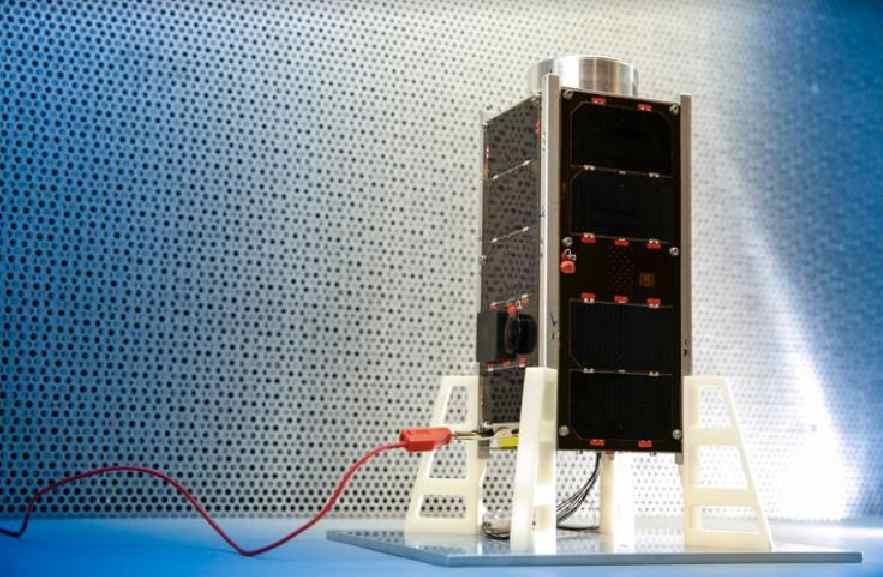 The SUSat satellite, built at the University of Adelaide.

“Historically, space has always been big agencies, doing big projects, with big budgets funded by the tax payer”, says Dr Matthew Tetlow, the engineer who led the team that built SUSat at Adelaide University. “Now, particularly with nano-satellites, it’s much easier to build a business case for a constellation (of nano-satellites) that costs $20 million than one that costs two or three billion”.

The Australian nano-satellites are part of a grand cooperative project by universities and research institutes in 23 nations known as QB50. Among this first tranche of nano-sats from the European-led QB50 project, SUSat and her sisters will be transported up to the International Space Station aboard the Atlas V rocket, blasting off from Cape Canaveral on March 19.

From the Space Station, way up there in the silent reaches of the cosmos, each tiny satellite will be pushed into space to independently orbit Earth. Using delicate and highly technical sensors, these nano-sats will investigate the little-known lower thermosphere, the stretch of space roughly 200-380 kilometres above the earth’s surface.

The harbingers of a revolutionary and affordable thrust into orbit, these nano-sats are CubeSats, so-called because they comprise multiples of 10 x 10 x 11.35 cm cubic units. CubeSats have excited astronautical interest around the world, and there are already CubeSat start-ups waiting in the wings in Adelaide.

Each of the three Australian QB50 CubeSats heading into space were built by Australian universities – part of a worldwide trend of non-government operators leading the way in space.

“The big scientific exploration of going to Pluto, is still happening, but a whole lot of space money is not being spent by governments, it’s coming from industry”, says engineer and space entrepreneur Matthew Tetlow. So far, in Australia at least, entrepreneurs are eyeing the possibilities of the relatively inexpensive Earth-orbiting nano-satellites. “We don’t have an Elon Musk (the space-mad billionaire owner of rocket manufacturer SpaceX)”, Tetlow says, “and we need one”.

Still, the nano-sats are a leap forward. “Nano-satellites are the sort of thing Australia can bite off and chew”, Tetlow says. “The building of the nano-sats is the most important thing, because that then allows us to build the next thing; we’ve done this once, our team knows at least one way to make a spacecraft, but we know 200 ways how not to. How’s this done, why was it done like this, how we can do it better next time”.

Across town, in Brompton, plasma physicist Dr Patrick Neumann is hard at work on his ion drive – an evolutionary, patented solar-electric ion drive that, once perfected, should be able to push a spacecraft from the International Space Station to Mars and back on one tank of fuel. And fuel for the Neumann Drive can be nearly any metal found in the asteroids, or even in space junk.

Neumann transported his Neumann Drive operation from Sydney to Adelaide in December to take advantage of the benefits that South Australia can offer space start-ups. “We already knew it’s where Australia does most of what it does in space,” he says. “With the defence and industrial capabilities of South Australia, it’s a good spot for a lot of space entrepreneurs to start congregating, and that’s why we’re here”.

Now awaiting the delivery of vacuum chambers from Germany (which might take a little time, since they weigh more than a ton each), Neumann and his team still reckon on being able to send a prototype ion drive up to the International Space Station for a space test at the end of next year.

“We’ve spoken to a few (budding space entrepreneurs) at various get-togethers and start-up conferences, and there are quite a few who are interested in putting together a company and working their way through the various requirements for this,” Neumann says. “Adelaide is tempting for them for a number of reasons, not just that there is already some support from more established companies, but also it’s a place where the fixed costs for running a company are a lot less. For instance, the rent is a lot more sensible than that of Sydney.”

The Neumann Space team thinks big; galaxy big. The firm’s website says: “We believe humanity’s future lays in the stars. Our future home will be different worlds, as government initiatives turn into corporate enterprises, and eventually tourism, mining and colonisation”.

Neumann says he and his team are working on the building blocks for the explorers of the new age. Better, faster and more efficient rockets will be needed, he says, to get to different places in the solar system to actually look at the icy wastes of the moons of Jupiter: Io, Europa, Ganymede and Calisto, and see if there’s life in the water geysers of Enceladus, a moon of Saturn. With the right transport, he says, we can investigate what caused the great rift on Miranda, a moon or Uranus, and look into why Neptune’s moon Triton is so big and twisted.

“We’re putting down the groundwork,” he says. “It’s the old Royal Airforce saying, that it takes 100 men with their feet on the ground to keep one man’s head in the clouds”.

If, by random chance, the Neumann Space ion drive is somehow caught up in an incident in space in the coming decades; if a space pirate tries to sabotage the drive for instance, then some kind of space law will be necessary. But sorting out jurisdictions and relevant legal precedents could prove complicated. So Adelaide University legal professor Melissa de Zwart and a number of her colleagues, from both Australia and from Canada, are hammering out a space lawbook.

“The last space treaty was the moon treaty, which essentially says that no one owns the moon,” de Zwart says (and even that treaty hasn’t been ratified by space-faring nations).

“The question of the militarisation of space becomes more important because it’s not just the balance between Russia and the US; it’s China, it’s Israel, it’s rogue operators, it’s anyone who can afford to launch a satellite”.

So Adelaide University has joined forces with McGill University in Canada and legal experts from both institutes are working on a set of space laws: the McGill Manual on International Law Applicable to Military Uses of Outer Space (MILAMOS). The Red Cross is an observer, so too is the US Airforce, and a number of sovereign nations including Canada, Britain, Germany, China and Russia.

“At the end of this three year project, we will be producing a manual which is essentially for field operators, a how to guide about the application of military uses of space,” de Zwart adds. “This is not meant to be academic or theoretical. It’s to provide operators in the field with information. Most of this is currently hypothetical, but not all of it. There was a situation recently where a satellite came very close to another satellite, what does that mean, what is doing, is it spying on us, is it going to crash into us? Our technical experts are looking at the sorts of scenarios that may actually arise in space”.

South Australia, de Zwart points out, has had a depth of space expertise since the 1950s, mostly derived from Woomera. “Australia was the third country in the world to launch a satellite from its own territory. It was done by team here in the physics department at Adelaide University, from Woomera”. And perhaps because of that, Australia is one of the few jurisdictions in the world to define where space begins: 100 kilometres above the Earth’s surface.

South Australia’s official interest in space has deep roots: both scientific and economic.

Global space revenue is worth US$350 billion ($455 billion), and that’s doubled in the last ten years, says Michael Davis, chair of the Space Industry Association of Australia, and the Weatherill government is actively pursuing the consolidation of a space industry in South Australia. “The SA Government’s strategy is about becoming a major hub for the national space industry,” he says. “The progress that has been made in the last twelve months has been remarkable. The ecosystem is growing”.

Yet Australia is one of the few nations in the world without a space agency, which Davis says will retard growth in the space industry. Even developing nations, such as Nigeria, have space agencies. “Whether we like it or not, the world space-faring nations have decided that single agencies are the way they want to do space, going back 30 or 40 years,” adds Davis.

As South Australian interest in space matures, it is diffusing into hitherto little-known byways of research: like the arcane field of space archeology. Dr Alice Gorman from Flinders University is an internationally recognised leader in this emerging field.

“I look at the material culture of space exploration from an archeological perspective, so I focus on space junk,” she says. “I say that if we’re going to clean up space junk, it would be a good idea not to destroy historic spacecraft. They should be left in orbit. My argument is that we have a unique archeological record in low earth orbit and we shouldn’t mess about with it too much, unless we really have to.” This so-called space junk, she muses, could be the inspiration for future space tourism.

Looking to the future, Gorman believes Australians need to start considering the possibilities of an environmental impact process for space industries, whether it be satellite launches, orbital debris cleanup, lunar mining, or even asteroid mining.

“People assume because there’s nothing alive in space, they don’t have to think about anything other than the technology,” she says. “But people should have a vested interest in the environment beyond the earth, as much as they do in the earth, and that ought to be taken into account when we’re developing space industries”.

Gorman notes that South Australia has a heritage and a legacy of working in space, that none of the other Australian states has, partly because of the historic presence of Woomera and all the accompanying research and industry. Today the pace of space research and industry in South Australia is picking up energy and pace, rattling red-hot in its gantry, and about to lift off into new realms of innovation and exploration.

“We have a really vibrant community bursting with ideas,” Gorman says, “and I think that’s a really important part of what makes South Australia the place to be for space at the moment”.