French couture house Dior has this week remembered a time of crisis 75 years ago, when the bloody upheaval of WWII pushed French fashion designers to dig deep to revive the French fashion industry. Rising to the challenge, in 1945 post-war French couturiers dressed miniature mannequins in high fashion collections and sent them on a tour of Europe and then the US.

This week, in reaction to the global pandemic many see as another historic global crisis, Dior has unveiled its haute couture collection on 37 miniature mannequins, one-third human size – echoing the post-war effort. Likely to become sought-after collectors’ items, these modern  exquisitely-dressed mannequins are housed in trunks, miniature replicas of Dior’s fashion flagship building in Avenue Montaigne, in Paris.

“We made this project in a very particular moment of our lives” says Dior designer Maria Grazia Chiuri (in the cover image), who began working on the 2020 show remotely under the Covid-19 pandemic lockdown in Rome, coordinating with the seamstresses and production crew who were also working from home. Like the post-war French designers, Dior intended to send the message that “traditions were alive” in Paris despite the worldwide coronavirus tragedy and lockdown.

In 1945-46, Europe was still reeling from the savagery of WWII, and Europeans were forced to cope with shortages of food, books and clothes. French fashion had been hit hard, and the lack of fabric, thread, buttons, and skills continued after the fighting ended and the bombs stopped falling. 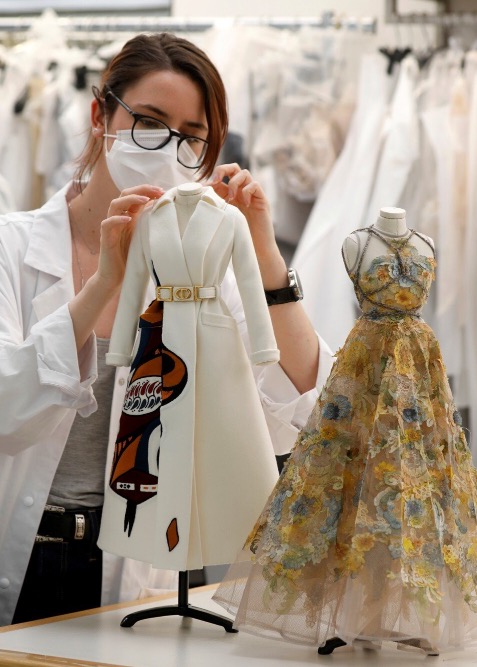 Milliners created little hats, stylists gave the mannequins elegant coiffeurs, jewellers provided small pieces of jewellery and accessories. The fashion was detailed and exquisite. Details were not skimped. Some of the mannequins even had hand-made underwear, and their handbags contained tiny purses.

All the frustrations of the long years of war were poured into the galvanic Theatre de la Mode  effort to revive French fashion, an essential pillar of French identity.

The collection eventually included 237 doll-size mannequins in 15 elaborate artist-created sets, opening at the Louvre in Paris in 1945 and visited by more than 100,000 people. These days the collection is housed at the Maryhill Museum of Art in Washington state.

With Haute Couture week in Paris effectively cancelled this year, Dior turned to the inspiration of an earlier time, when the world was also gripped by a far-reaching crisis, the Theatre de la Mode.

Intended to be a display of high-end craftsmanship and one-of-a-kind ensembles, in the past the couture collections have been attended by fashion cognoscenti from around the world.

This year, Dior’s couture gowns were inspired by surrealist women artists such as photographer Lee Miller and they were presented via a fantastical film shot by ‘Gomorrah’ director Matteo Garrone.

“It’s a different experience,” says Chiuri of working on the film featuring nymphs and mermaids seduced by the couture clothing. “But I think it’s a beautiful experience.”