Five years ago it would have been unthinkable. International literary festivals, where writers and readers speak freely and exchange ideas, were not permitted in shuttered Myanmar.

Censorship had blighted the nation for four decades. Military despots blinkered the population with iron rules on what could and what could not be published. People were jailed simply for making a speech or writing a pamphlet. The press was shackled and many books, both fictional and non-fictional, were black-listed. The bans in turn led to fear and self-censorship, and crushed any real market for dissident titles.

Then, remarkably, Myanmar’s generals began to change. A quasi-democratic election was held in 2010. Hordes of political prisoners have since been released, including the democracy heroine Aung San Suu Kyi. Foreigners were welcomed to the long restricted nation; the US, the EU and Australia eased sanctions and finally, last August, the stringent censorship laws were relaxed.

The arts began to flourish again; a rock concert was even held in the grounds of the revered Shwedagon Pagoda. Suddenly long-banned books were in the bookshops and Myanmar’s people again began to read widely. 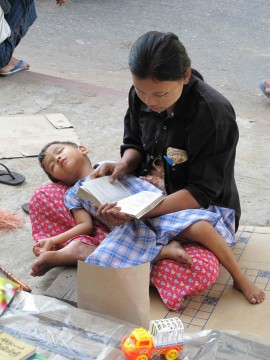 A moment of reading in Myanmar. Photo Sian Powell

Now Myanmar’s first international literary festival is planned for next month (subs beginning February 1). Suu Kyi has agreed to be the Irrawaddy Literary Festival’s patron, and a long list of distinguished Myanmar and international authors has been recruited, including the Chinese-born British writer Jung Chang, who wrote “Wild Swans”, the Indian novelist Vikram Seth, perhaps best known for the massive “A Suitable Boy”, and Briton Josceline Dimbleby, who wrote the biographical family story “A Profound Secret”.

Myanmar authors who will be at the festival include the likes of long-exiled writer Pascal Khoo-Thwe, who won awards for “From the Land of Green Ghosts”; a memoir of his early years and his struggle living with the rebels in the Myanmar jungle, and the Myanmar writer, surgeon and former political prisoner Ma Thida. Plans for panels in both English and the Myanmar language, with simultaneous translation, are in the works.

Ma Thida, whose recently published prison diary has apparently sold out in Myanmar, says the country has a long and luminous literary tradition, but no real experience of literary festivals as they are known in Australia and Europe. “There’s a long tradition of literature talks, but not as the international literature festival,” she says from her home in Yangon. “Most of the literary talks here are kind of lecturing and a lot of people, especially in the rural areas show up, and they just listen to whatever the writers say.”

Myanmar was widely known as Burma until recently, the name by which the south-east Asian country is still known by many people, including the British – an example of the often convoluted and tortured politics it inspires. In 1988 the nation was convulsed by a mass uprising against the ruling generals. Huge protests by led by Buddhist monks and university students demanding democracy were quickly followed by a brutal crackdown and a massacre with perhaps thousands of killings.

This mass upheaval brought increased censorship, not only by the Press Scrutiny Board but also by the local authorities, Ma Thida says. Literary interaction had been restricted to formal lectures with no listener interaction, but after the uprising even the lectures were banned. “They decided not have that kind of literary talk because a lot of the writers were talking about anti-government sentiment,” she adds. In 1993 Ma Thida was sentenced to 20 years in prison for her support of the pro-democracy movement, and she was finally released in 1999.

As Ma Thida points out, in Myanmar basic freedoms were curtailed for decades and the struggle against arbitrary military edicts seemed never-ending, so political thought has became entwined with ordinary life, a matter for ongoing conversation. Now there is a geyser of freedom of all kinds in the long-starved nation, at least compared with earlier days under the generals, and many of Myanmar’s people want to talk about it. At length.

Jane Heyn, the driving force behind the Irrawaddy Literary Festival, says this political urge has been one of the trickier questions to address when organising the festival, and one that prompted “lively debate”.  “I guess some people want to be more political, but the consensus opinion is that it’s a literary festival and not a political platform,” she says.

Heyn, who is married to the British ambassador to Myanmar, Andy Heyn, says she has met with almost no obstacles devising and organising the three-day festival. No censorship requirements have been imposed at all, which old hands have found astonishing in a nation where, until quite recently, all the pages of the English-language Myanmar Times newspaper had to be submitted to the government censors before they were actually printed, and quite often entire articles were cut.

“I’m not expert on how the laws have been changed,” Jane Heyn says, “but I do know that one of our sponsors or supporters for the festival is the very nice bookshop called Monument Books here. They have gone from having to give everything to the censors and have it kept there for however long — weeks, possibly months — to get the authority to put the book on their shelves. That has disappeared overnight. They are over the moon.”

So the festival has become almost a de facto celebration of this new freedom, the freedom to write and read just about anything.

Heyn is delighted Suu Kyi will be the festival’s patron. She and her husband went to visit the Nobel laureate soon she was released from house arrest in 2010, and Heyn took the opportunity to fly a kite and pose the patronage question.

“She immediately said yes, she would,” Heyn remembers. “That was two years ago. It was difficult to think about having a literary festival because at that point it would have been difficult for writers to get visas.” But as the months passed, change in Myanmar began to rocket ahead, and soon there were no obstacles in the way of a fully-fledged international literary festival.

Heyn has kept the festival as local as possible, with most of the funding coming from Myanmar enterprises. “The entire thing is for the Burmese (as they are still known to the British) and I wanted it to be set up in such a way that if it’s an enjoyable event for the Burmese people they wouldn’t have to seek funding from elsewhere. I wanted it to be grass-roots funding; to have grassroots backing, not something that’s imposed on people by anyone playing at the idea of having a literary festival.”

For her part, Ma Thida is looking forward to the three days packed with reading, talking, thinking and listening. “I really want to have a kind of international festival since here our tradition is more one-way, kind of lecturing. So I want to change the culture of literary talks here, (to have) two-way panel discussions to explain more about the writers’ work. One-way literary talks cannot promote the readership. We want to establish that kind of culture here. I’m excited to have that kind of literary festival.”