High heels give a kick to New Year’s Eve parties; sashaying through a night of cocktails and canapés. Worn at weddings and to wakes, to summits and to war-rooms, heels are the event wear for women who are stepping out. But are heels losing their lift? After decades of elongating women’s silhouettes, lengthening their legs and occasionally tipping them over, the high tide of high heels could finally be ebbing.

Flat shoes have been striding through the pages of uber-glossy women’s fashion magazines, making a stand on catwalks and adorning the feet of current and former first ladies, France’s Carla Bruni and America’s Michelle Obama. Flats are on the move. But it will be a long, weary march – regardless of the pain, high heels are simply too flattering to give ground easily.

“The thing about heels is how much time you spend carrying them around in your handbag while you do the actual walking in flat shoes, and how much time you spend skulking in doorways changing them over,” says Stephanie Raethel, a Sydney-based digital media executive. “You need time to wear heels – dashing about is not an option. And stairs – don’t get me started about fire drills. I once did 27 flights in a pair of sling-backs. I would cheerfully have set fire to someone when I reached the bottom.” 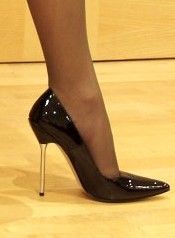 Despite the drawbacks, Raethel likes wearing heels. She thinks they make her stand taller and she believes all her clothes look better when she is wearing heels. “But being a practical sort I always have a pair of flats and a bus ticket handy.”

Famed shoe designer Christian Louboutin’s heels can reach heights of 12 centimetres, and those are the styles without a platform sole. Women should actually enjoy wearing his high heels, he has said, because they force feet into an arch that mirrors the arch of their feet when they’re having an orgasm.

Regardless of Louboutin’s sexual wisdom, the advent of new, closer-to-the-ground shoe styles can only be good news for women in power, especially those who battle with their high heels nearly every day.

In a modern variation of the Cinderella moment, Julia Gillard lost one of her shoes when security agents bundled her away from a rowdy demonstration in Canberra in January (the shoe was seized and it was even listed on Ebay, but it was finally returned, without any fairytale princess champagne).

Then, in Sydney in August, the Australian prime minister lost one gleaming high-heel walking up the steps to a stage at a Customs House function. She laughed that one off, more or less. Worse yet, in October she had a spectacular face-first fall at the Gandhi Memorial in India, when one of her heels got caught in the lawn. Her graceless sprawl was captured on camera, but she didn’t let it faze her. She got up, at speed, and kept right on walking, click-clack, in those heels of power.

But now she seems to resent those shoes. “For men who get to wear flat shoes all day, every day, if you wear a heel it can get embedded in soft grass,” she told reporters at the time. “And then when you pull your foot out, the shoe doesn’t come, and then the rest of it is as you saw”. She refuses to be worsted by the heels though; bravely exposing herself to yet more ridicule should she fall again, and rejecting a safe but ignominious retreat in low-heeled shoes.

Yet even the heel queen and fashion designer Victoria Beckham has recently been seen in designer flats. Suave enough for high-powered corporate and political meetings, the meme of sculpted flat shoes has been embraced by the likes of Giorgio Armani, Manolo Blahnik, Marc Jacobs, and even the master of heel elevation, Louboutin, whose current collection features flat shoes with studs, no less.

Margaret Thatcher, the one-time Iron Lady prime minister of Britain, wore heels with aplomb, although there is a photo of her with shoes kicked well to one side as she rests in a chair. German chancellor Angela Merkel generally refuses to do battle with heels – she sticks with practical, solid footwear. By way of contrast, former Ukraine prime minister, Yulia Tymoshenko, (now jailed on the dubious charges of “abuse of office”) was known for the long blonde plait wound round her head, her designer outfits and her extreme high heels.

As US Secretary of State Hillary Clinton said at a Time magazine function earlier this year, women have proved they can sprint to the lead wearing heels. “I do want to give a shout-out to Angela Merkel and Dilma Rousseff (president of Brazil),” she told the guests, “and Portia Miller (prime minister of Jamaica), Christine Lagarde (IMF chief), who are also on this list and prove once again that you actually can run the world in heels and pantsuits”.

But in reality, Clinton has a bob both ways. Sometimes her shoes are lowish and very practical, as Lagarde’s sometimes are, and then, if the occasion so warrants, she hauls out the stilettos. It’s like international diplomacy; everything is negotiable.

Aela Callan, an Australian television journalist who covers violent uprisings, poverty and development in the backblocks of Asia, finds that her job calls for practical footwear – “chunky jungle boots” rather than designer loafers – but she loves her heels.

“Classic killer heels are effortless and an essential way to stand up straight and look fate in the eye,” she says. “It’s a feeling you never get in flats. The shoes of my life were a pair of three and a half inch, patent, fire-engine red, peep-toe stilettos with white piping, which I used to traipse around Sydney in when I worked for Channel 7.  They were entirely unpractical, sexy as hell and I miss them. Forget flak jackets and bulletproof helmets, women know heels are much more powerful.”

The American cartoonist, Bob Thaves, once tipped his lid to Ginger Rogers and her dancing partner, the nimble Fred Astaire. Who had the power? “Sure he was great, but don’t forget Ginger Rogers did everything he did backwards … and in high heels.”

Germaine Greer, it seems, believes women can lose the heels and still rule the world, not to mention dance. “If a woman never lets herself go, how will she ever know how far she might have got?” she has famously asked. “If she never takes off her high-heeled shoes, how will she ever know how far she could walk or how fast she could run?” Long-term and experienced Australian heel-wearers, though, insist they can walk a long way in their heels and even run in them if they have to – and they would if the alternative was giving up heels for good.

French politician and former justice minister Rachida Dati may not ever know how fast she could run because she won’t buckle to any expectations about her shoes. “I was told by my predecessor [at the Ministry of Justice], Elisabeth Guigou, a very pretty woman, that it wouldn’t be long until I gave up my high heels,” she once told a journalist. “Well, I never wanted to do that.”

She didn’t lose the heels, but she was booted out of the French ministry, and now she’s in the difficult position of suing a former boyfriend to force him to admit paternity of her child. He has counter-claimed she had as many as eight lovers at the time of their liason. She was faithful to the heels though, which she wore through her pregnancy.

Heels have a habit of revealing the inner politician. Former foreign minister Alexander Downer made a tactical error when he wore dangerously high leopard-skin print stilettos and fishnet stockings for a Variety Club fundraiser in 1996. He wore them a little too well, and the image just refused to die.

Current federal minister Kate Ellis (responsible for childcare, early childhood and employment participation) posed in sky-high heels and a slinky black leather mini-dress for Grazia magazine in 2010. This photo-shoot, which Ellis said she enjoyed and which produced images of a young, slim, model-tall politician showing a lot of leg, was apparently a misguided attempt to address Australian women’s low self-esteem regarding body image. The Canberra press gallery considered it an oddly clumsy career low for the South Australian politician.

High heels and power – it’s a killer combination, and a meme that has found a fond home in fetishists’ imaginations. There’s no doubt that wearing heels can be painful, and various learned medical societies and doctors have warned of damage to the ankles, knees, toes and indeed the whole foot; they warn of potential hammer toes, torn ligaments and irritable bunions.

Sarah Jessica Parker, whose Sex in the City character Carrie Bradshaw was addicted to high heels, says the shoes have damaged her physically. “I used to spend 18 to 20 hours filming in heels,” she has reportedly said. “I’ve totally destroyed my body by running and dancing in heels. My knees are shot.” (Not so shot, though, that she couldn’t wear a pair of stylish black super high-heeled Manolo Blahnik pumps to a Barneys window opening in New York last month).

So why persevere? High heels make can make a woman look slimmer, and her legs look longer. Worn well, they can add a note of grace and elegance, and that’s enough for those women who remain loyal to the heel.

Sarah Wilkinson, as Australian executive based in Bangkok, used to love her high-heeled pumps. “They make your legs look longer and I love the sound of click, click, clack when you are all dressed up and feeling special … perhaps the clicking is a call of “look at me, I’ve made an effort,” she says, while conceding that these days sometimes reality intrudes.

“We are off to Aberdeen (in Scotland) today for a week and I am packing my three-inch heel boots. Not at all practical particularly if the cobble streets are icy, so I will probably wear my attractive rubber-traction-heeled snow-shoes and admire my boots as they sit unpacked in my luggage (again).”