Mildew, mould, cyclone Nargis and sheer neglect have taken a toll in this city. Too much of colonial Yangon is falling to bits. It seems most locals, though, don’t want the mouldering grandeurs of the city bulldozed to make way for shiny new developments. They have lived and worked with these monumental symbols of Empire for decades and regardless of creeping dilapidation, they favour conservation rather than transformation.

Once known as Rangoon, in a nation once known as Burma, the city can evoke a lost era. This is where the likes of Rudyard Kipling stopped by the Pegu Club to listen to stories of the battles in Upper Burma where passionate insurgents were fighting the foreign invaders. In “From Sea to Sea” Kipling wrote about his visit to the Club, where he heard of “interminable chases after evasive dacoits, of marchings and counter-marchings that came to nothing, and of deaths in the wilderness as noble as they were sad”.

The poet of the Raj only stayed for a night in 1889, but it inspired his poem Mandalay. These days the Pegu Club is a derelict ruin of broken windows and rotten wood, and like much of colonial Rangoon, sorely in need of restoration. Once a pompous establishment where colonial rulers discussed the strategy of annexing Upper Burma, and ways of dealing with Burma’s exiled King Thibaw and Queen Supalayat and quashing tribal firebrands, now the Pegu Club is mostly patronised by rats. And possibly termites.

Like Sofaer’s, it’s a shadow of the place it was in the early years of last century. Built around 1906 by a Baghdadi Jew, Sofaer’s once housed a Reuters Telegram office, and shops selling a wide variety of international provender – German beer, Egyptian cigarettes and English sweets. In the early 1900s Rangoon was a bustling port city with a wildly varied population of Madrassi and Bengali Indians, Burmese of different ethnicities, and Scottish, English and European expatriates. 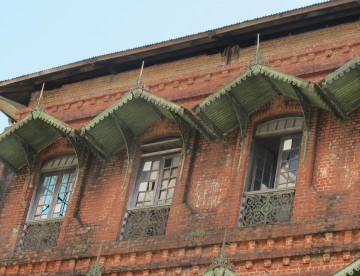 Once a jewel in the crown of the British empire and a trading city richer even than Calcutta, since those heady days of riches and influence Rangoon has spent decades gently decaying.

Back then, steamers from British and Asian ports arrived regularly, bringing the soldiers of empire and their wives and children, officers, bureaucrats, con-men and adventurers and, of course, writers. William Somerset Maugham visited and stayed at the now carefully restored three-storey Strand Hotel, on the riverfront downtown, and later wrote “The Gentleman in the Parlour – A Record of a Journey from Rangoon to Haiphong”. But the venerable novelist seemed more impressed with the city’s enormous, golden Shwedagon Pagoda (“dim, severe and splendid”) than Rangoon’s Edwardian streetscapes which, after all, must have seemed fairly ordinary to a Edwardian-era novelist.

The steamers brought European goods to Rangoon as well; to be sold in Sofaer’s shops, but more importantly in Rangoon’s number one emporium: Rowe and Co, across the way from the Sule Pagoda. A store for the discerning expatriate, Rowe and Co was known as the Harrods of the East, and sold an impressive array of “ladies’ & gentlemen’s outfitting, drapery, millinery, boots and shoes, crockery and glassware, brassware, trunks, cutlery, watches and clocks and saddlery”.

More recently the imposing building with the splendid central tower was home to the Myanmar government’s immigration department, where squadrons of officials manned the desks, shuffled the paperwork and maintained blacklists of undesirables (many foreign journalists among them). In 2005, this immigration department, like most Myanmar government departments, was moved to Myanmar’s new capital in Naypyidaw, 320 kilometres north of Yangon.

This enormous official exodus entailed the evacuation of an army of (often disgruntled) bureaucrats, who abandoned their offices in Yangon to vigorous weeds and insect-life. Now the government is in the process of minimally maintaining a few of these neglected government buildings in order to sell them off, and these days the immigration department is scaffolded and swathed in blue tarpaulin-like fabric and apparently awaiting its next transformation into a boutique hotel.

Down the hill, though, in Pansodan Street and on the riverfront, visitors will see building after building in urgent need of repair, with no comforting blue tarpaulins to protect them against the ravages of time and weather. It’s the same story for many hundreds of colonial-era buildings in Yangon – they’re mostly still standing, and mostly at least partly occupied, but age is encroaching. Damp, rust, termites and plant-life have eaten into the roofs and encrusted the walls.  Much of Asia’s richest array of colonial architecture is at risk.

The emblematic rose-red High Court building, which backs on to Pansodan Street, appears to need both protection and attention. In October scores of lawyers marched down the road to protest against a mooted government plan to sell the Court (or more worryingly, perhaps just the site) to a group of hoteliers.

But the High Victorian-style building, verging perilously close to rococo and replete with pillars, arches and domes, is quiet on a hot day in December. Booksellers and fruit vendors are lined up on the pavement on the opposite side of the road, and a guard bans entry to the court compound. Random weeds sprout high up on the building’s walls and mould is getting a grip on the towers, the red walls and the white trim.

This building was well-known to the Irish writer Maurice Collis, whose book “Trials in Burma” was a memoir of his time as a magistrate in Rangoon in the 1930s. Scrupulously fair, he found himself in trouble when he refused to discriminate according to race. He sentenced a British military officer to three months in prison for criminally negligent driving, whereupon Collis was reprimanded and rapidly transferred.

George Orwell, who had himself served as an Indian Imperial Police Officer in Burma, favourably reviewed Collis’s book in The Listener magazine, noting that any fair-minded magistrate did it tough in Burma and India. “In practice he is part of a huge machine which exists to protect British interests,” Orwell wrote, “and he has often got to choose between sacrificing his integrity and damaging his career”. For his part, Orwell had come to despise the lazy bigotry of imperialism as he described it in his novel “Burmese Days”.

The official imperialists’ castle and headquarters was the Secretariat, a huge and imposing neo-Gothic compound that stretched for an entire city block in Rangoon. Here the business of Empire was conducted; edicts delivered and contracts negotiated. Known after the British withdrawal as the Ministers’ Office, the turreted compound has important associations: Aung San, the father of democracy heroine Aung San Suu Kyi and an independence hero, was assassinated in 1947 in a wing of the Secretariat, along with several of his cabinet ministers.

The compound now has a serious case of decay, with floors and windows missing in some buildings. Early last year (subs 2012) a commercial proposal was mooted to turn the compound into a combined hotel and museum, but the commercial nature of the proposal prompted an outcry in Myanmar, and it was shelved. Now the buildings have apparently been earmarked for a group with large ambitions (perhaps too large): they want to transform the ruin into a museum and cultural centre. Onlookers are quietly pessimistic, fearing these plans are too grandiose and will come to nothing, leaving the Secretariat again in the firing line.

In a city with a dire shortage of modern hotel rooms and office space, it must be tempting to rapidly sell off the white elephants for demolition or conversion.

So Myanmar historian Thant Myint-U, author of “The River of Lost Footsteps” and other titles, recently stepped into the breach and established the Yangon Heritage Trust. International donors, including Britain, Switzerland and Australia, have come to the party to support the new non-government organisation. Foreign Minister Bob Carr last year announced that Australia would fund an Australian heritage expert to work with the Trust for at least a year. The expert will begin work in March and will help complete a statutory list of urban heritage buildings and sites and support the trust generally.

The acting director of the Trust, architect Moe Moe Lwin, can get a little emotional about the crumbling colonial glories of her long neglected city. The hospitals, the houses, the courts, the schools, the offices, the government department buildings: Yangon’s residents have lived and worked with their decaying grandeur for decades, she says, and most wouldn’t want to see them demolished to make way for a more streamlined city. “The ones who were born in those hospitals, who work in those buildings,” she adds, “they don’t want them gone”.

These concerns have only arisen in the past few years. Myanmar’s brutal regime was shunned by the west for decades, leaving the nation isolated and undeveloped. The US, the European Union, Australia and other nations imposed sanctions to force the aging military autocracy to change its tune. After decades of brutal and increasingly bizarre rule, the generals finally permitted a quasi-democratic election to be held in 2010 and since then the nation has lurched forward.

Thousands of political prisoners have been released, including Suu Kyi. Long-banned foreigners have been welcomed. Press censorship has been eased.  International investors have swarmed into Myanmar to take advantage of its boundless potential. But fast-forward development usually comes at a price, and in Myanmar’s case that could be the loss of irreplaceable architecture. This heritage is largely gone in Asian cities like Singapore and Hong Kong, and in Myanmar the Trust is pushing for some sort of legislative protection, hoping that private-sector investors will step in with plans that incorporate restorations.

But so many things are changing so fast, and in a nation where the authorities are trying to broker peace with militant ethnic groups and at the same time address enormous social problems, the protection of Yangon’s architectural heritage has yet to be seen as a matter of urgency. In 2001, the Myanmar government listed 189 buildings of value in Yangon, including 90 from the colonial era, and earlier this year the government imposed a temporary moratorium on the demolition of buildings built more than 50 years ago, although in practice the ban may not be rigorously imposed.

Of course there is a school of thought that holds the new Myanmar has no need of a colonial legacy. Why preserve buildings built by the British, the interlopers who once ruled Burma and subjugated the Burmese? Moe Moe Lwin concedes that some of Yangon’s residents feel the colonial legacy isn’t worth preserving. “Sometimes they don’t understand; sometimes they have a confused concept; dome architects think that way too.”

For many of the city’s colonial era buildings, demolition is still possible. “We don’t yet have the mechanism to stop it. But we’ll try very hard.”