The suite life of a writer

Writers once travelled through Asia in a leisurely fashion, steamers gently rolling between Bangkok and Batavia, rickshaws wheeling through the streets of Singapore, pleasure boats pulling into Penang. European wanderers, adventurers and authors drank gin slings while waiting for sumptuous dinners; colonial matrons sipped tea on hotel balconies; and the business of empire rumbled on.

Colonial Asia (or the Far East, as it was then known) was replete with hotels for the well off, and well-travelled novelists in search of rich material. Rudyard Kipling, Somerset Maugham, Joseph Conrad all added spice to their writing while spending time in Asia.

Today a number of these grand establishments are still standing.

The Raffles in Singapore, the Oriental (now known as the Mandarin Oriental) in Bangkok, the Metropole in Hanoi, the Strand in Rangoon (Yangon) and the Eastern and Oriental in Penang all hosted writers of varying calibre.

The hotels’ literary heritage is now seen as an added attraction, played up in bars and lounges, or with suites named for famous authors, and with marketing material pinpointing the writers’ occasional mention of the hotels (their sometimes pungent criticisms, on the other hand, are ignored), and sometimes merely the fact they may, or may not, have stayed in them.

The Raffles in Singapore has recently taken steps to entrench this heritage in the decades to come by offering both established and unknown authors of today up to four weeks’ free accommodation (if their applications are approved). Two authors will be chosen each year for its new Writer’s Residency Programme, and the first, British writer Pico Iyer, who has written a book about the hotel, has already won one of the places.

With its gleaming white frontage and tall arched windows, the imposing Raffles is perhaps the queen of Asian grande dame hotels. In an eternally bustling and crowded city state where much of the colonial architecture dating back to the days of British Malaya has given way to modern skyscrapers, the Raffles echoes a bygone era.

Established by the industrious Sarkies brothers of Armenian ancestry, who built a series of luxury hotels across Asia, and named after modern Singapore’s founder Sir Stamford Raffles, the main building of the hotel opened in 1899. Subsequent additions included new wings, a veranda, and a ballroom.
The Raffles rapidly became a plush backdrop for Singapore expatriate society. Some time around 1915, a Hainanese barman working in the hotel’s famous Long Bar invented the renowned Singapore Sling cocktail. The heady concoction of gin, pineapple juice, lime juice, Benedictine and Cointreau was a hit, and soon became globally popular.

William Somerset Maugham, the British novelist who wrote The Moon and Sixpence and Of Human Bondage, made a habit of staying in the great hotels of the region

He once said, “Raffles stands for all the fables of the exotic East” – a phrase that has since been quoted again and again.

Another British author, Rudyard Kipling of Kim and The Jungle Book fame, was less of a marketer’s dream. He enjoyed his meals at The Raffles but complained about a hotel “where the food is as excellent as the rooms are bad”.

Still, with a comprehensive renovation completed in August this year, the Raffles now offers all mod cons, from comprehensively appointed rooms and fine dining to a limousine service and a spa.

The Hotel Metropole opened in 1901, in Hanoi, in that part of the world then known as Tonkin, in French Indochina. From the very beginning the Metropole was a landmark in the tumultuous history of Vietnam.

In the early 1900s Vietnamese freedom fighters took to kidnapping and bomb-throwing. By 1945 this violent uprising had grown into the ultimately successful rebellion led by Ho Chi Minh against French rule, a struggle that was in turn followed by the Vietnam war. 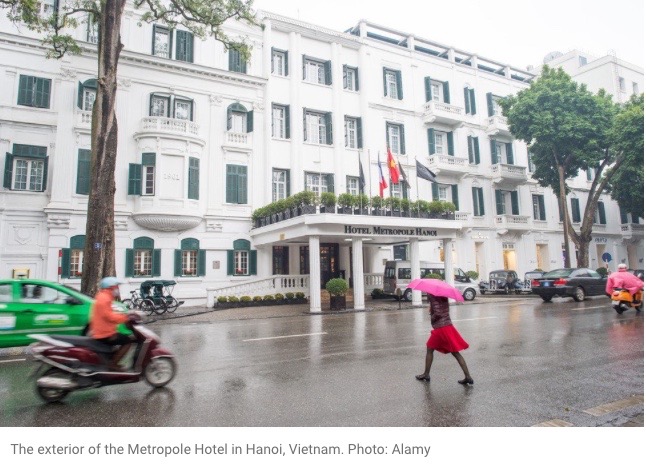 Graham Greene wrote part or all of his 1955 novel The Quiet American in the hotel, and now, naturally, there is a sumptuous Graham Greene suite.

In 1930, the remarkably unflustered Noel Coward stayed for a while. The famed English playwright, actor and director had motored up from Haiphong harbour for a visit, majestically ignoring the rumbles of war.

“Outside the revolution was in full swing, and there was occasionally the sound of gunfire,” he wrote. “Inside all was peaceful and well-ordered. The dinner was delicious, the wine excellent, and Monsieur Pasquier the most delightful host.”

On the banks of the mighty Chao Phraya river in central Bangkok, the Oriental once welcomed guests arriving by boat from the steamships that rolled almost every day in the early 1900s, often via Singapore, Hong Kong or Saigon.

A grand opening day in 1887, with a banquet and two orchestras, celebrated the launch of the Oriental’s new incarnation – an architect-designed edifice.

This building, which supplanted an earlier Oriental, is still standing, and known today as the Authors’ Wing – there’s an Authors’ Suite too: the Mandarin Oriental has made much of its literary associations.

A more modern wing is currently having an elderly lady’s nip and tuck, due to be finished in mid-November.

The indefatigable Somerset Maugham stayed at the Oriental in 1920s. He wrote a children’s story, a Siamese Fairy Tale, while he was staying there and endured a savage bout of malaria.

Coward also stayed at the hotel, declaring: “It is a lovely place, and I am fonder of it than ever.”

Fondly known as the E&O to intrepid travellers of the early 20th century, the Eastern and Oriental in heritage George Town, on the northern edge of Penang island in Malaysia, has been catering to well-heeled guests since it opened in 1885.

Cooled by sea breezes, the E&O was a European-style oasis in British Malaya’s tin-mining and rubber-planting Straits Settlements.

These days, the modern E&O remains notable for its long sweep of seafront, its vast lobby and its rooms looking out to the Malacca Strait. Modern additions include a sparkling pool near the sea wall so guests can loll on deckchairs and leap into the pool for a cooling dip whenever they choose.

A lengthy facelift of the hotel’s Heritage Wing is under way, and expected to be completed by December this year.

The German novelist, poet and Nobel laureate Hermann Hesse, who wrote Steppenwolf and Siddharta, visited the E&O in 1911, finding “the most beautiful hotel in the East Indies that I came across for Europeans”. 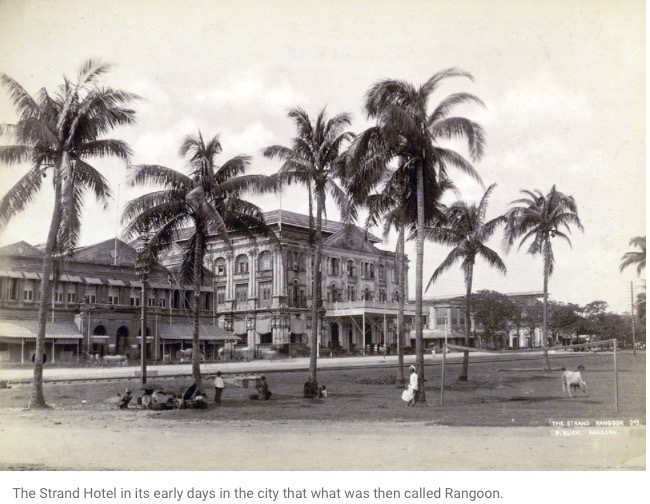 A boom town in the early 1900s, Rangoon (now known as Yangon) boasted emporia selling crockery, millinery, drapery, haberdashery and anything else the colonial matron might need.

One of British India’s biggest and most trading hubs, the city was home to merchants and entrepreneurs, tiny shops and enormous corporations: Burmah Oil, an ancestor of BP, was just one of the companies making money hand over fist in colonial Burma, now known as Myanmar.

Opened in 1901, The Strand hotel  took full advantage of its premier riverside position. Visitors flooded into the hotel to enjoy concerts, the restaurant and the convivial society.

Today the hotel remains an important monument in the history of modern Yangon, where decades of economic neglect has had the unexpected benefit of preserving a rich array of colonial buildings.