Transforming fluffy white silkworm cocoons nurtured on Chinese mulberry trees into high-fashion silk shirts, blouses, jackets and other garments is a long, multi-stage process of harvesting, washing, spinning, weaving, dying and sewing. One privately owned Hong Kong company will soon own and manage every stage of this silk journey.

Bombyx, named after the Latin word for the silkworm, was established in 2018 by Andrew and Hilmond Hui, father-and-son entrepreneurs who have invested in the social importance and future profitability of organic and sustainable enterprise. 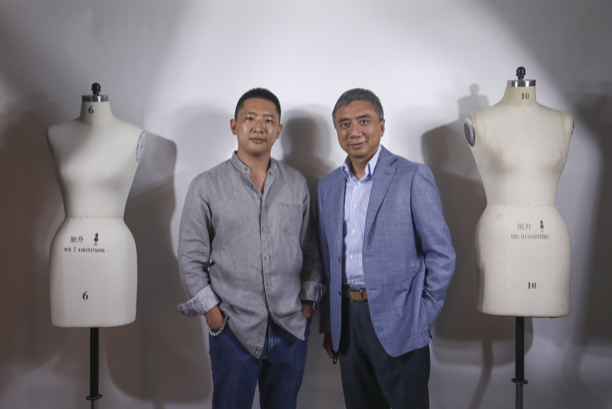 Their investment is a long-term bet on what the world needs in a time of climate change and increasing environmental sensitivity, and what the world will pay for in the decades to come

Bombyx, the Huis say, will forge a sustainable trail for other silk producers to follow, using the latest best practice in irrigation, with terracing and wells, in agriculture with double cropping and chemical-free nurture, and in manufacture with sustainable energy use in the factory – 90 minutes from the mulberry trees in Sichuan, southwest China.

Producing organic and sustainable silk is an expensive process, but the Huis think it will pay off in the long run. 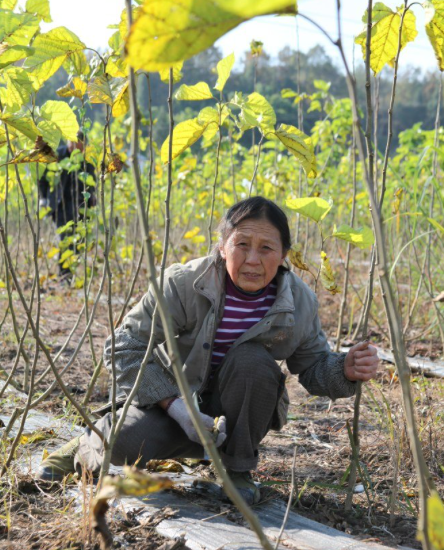 Working on the mulberry trees in Sichuan.

The move into silk production in Sichuan was a natural extension of a reverse journey for Andrew, who arrived in Hong Kong in 1973 as a 15-year-old from Chaozhou in Guangdong, southern China.

Abandoned by his father, he and his mother settled in Hong Kong, renting a tiny room for HK$50 a month. His mother worked as a factory seamstress, and Andrew finished one year of school before starting to work and carrying on his education at night school.

The teenager triumphed over his difficult beginnings and, from that tiny room, he moved onwards and upwards. In 1995, he launched the clothing enterprise Profits Fund Global, now an international company known as PFG. The Bombyx silk enterprise is part of PFG, run by Andrew, the PFG president, and Hilmond, vice-president.

With about 100 employees in Hong Kong, and many tens of thousands of employees and contractors in China, PFG moved into silk led (at least partly) by a drive to help its factory workforce, the Huis say.

Some years ago, the company factory in Zhuhai, Guangdong, was mainly staffed by employees from Sichuan, who went home at every opportunity. “They missed their home, they liked to go home,” Andrew says. “They wanted to take care of their parents, take care of their children.”

Garment factories had traditionally been clustered on China’s coast to take advantage of nearby ports but, over time, workforce costs increased. As other factories in Guangdong moved offshore to take advantage of less expensive labour, in 2013 PFG instead moved inland, opening a new factory to make mainly women’s fashion in Nanchong in Sichuan, closer to the homes of many of the factory workers. 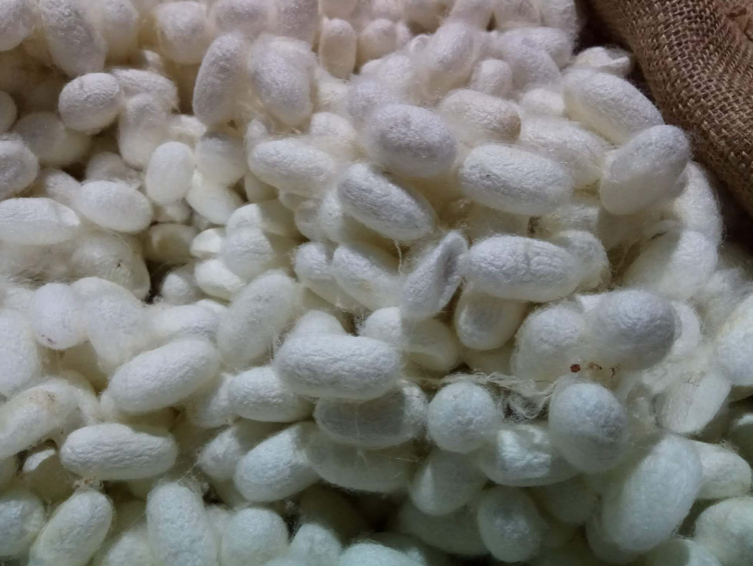 Silkworm cocoons ready for processing at the Bombyx factory in Sichuan.

That factory has been established with sustainability in mind, and the move to Sichuan led to silk, at every stage of the growing and manufacturing process.

“He discovered where we picked to build our factory was actually one of the original homes of silk,” Hilmond, 29, explains of his father. “It was where silk began. Our factory is in a place called Yilong county, where legend has it, silk was invented 5,000 years ago.”

Solar panels were installed to provide some energy, and water recycling facilities were included, along with modern washing, drying and sewing machines. Bombyx aims to be carbon neutral by 2024, and now runs an organic silkworm cocoon harvesting operation across a green patchwork of land totalling 40,000 mu, or about 2,600 hectares (6,400 acres) high in the hills of Sichuan.

ilkworms feed on mulberry leaves from trees on the properties, then spin their cocoons, which are collected for further processing, reeling and spinning or directly woven into fabric. It is then “degummed”, to remove the glue-like silkworm saliva, then dyed and printed, further finished and finally sewn into garments.

The fashion is then sold around the world by retailers including J Crew, Madewell, Everlane, Rag & Bone and ThirdLove.

“Controlling the vertical supply chain allows us to ensure that things were traceable, things were done properly, but also at every stage that people were being taken care of,” Hilmond says. “It was a brand new direction, but also something that had been ingrained over the past 20-something years we have been working.”

Before Bombyx arrived, the local farmers sold silk cocoons to a range of buyers, for the best prices they could get. Andrew was struck by how difficult their lives were. The company encourages double cropping, so farmers can grow and sell produce such as mustard greens, beans and potatoes between the trees.

“Because we will control the entire vertical supply chain, then we can guarantee their income and their output, their yield,” Andrew says, noting the company is scheduled to open a mill this year.

Silkworms have been spinning cocoons and humans have been harvesting them for thousands of years in Yilong district. The Huis were happy to learn from age-old practices, as well as the best of modern technology, and the resulting silk has been certified organic.

“We take the greatest hits of history and apply them with technology into modern-day agriculture,” Hilmond says. “It’s not just to limit the impact agriculture has on the land and the people, but to help regenerate it, and help bring farming back to the way nature intended us to do it.”

Bombyx and the parent company PFG have weathered the pandemic well, Andrew says, and managed to avoid retrenching any workers. Future prosperity may depend, in part, on whether Bombyx has correctly predicted a growing consumer interest in sustainable clothes, made from sustainably grown silk. The trend of “fast fashion” – buy it, wear it, throw it away – dismayed environmentalists, but change seems to be in the air.