Nano-satellites thrust Australia back into space

A swarm of shoe-box sized satellites is scheduled to begin the first stage of a historic journey into space on March 19, when the Atlas V rocket blasts off from Cape Canaveral with the tiny satellites on board, along with NASA equipment and supplies destined for the International Space Station.

Australian universities are sending three of these nano-satellites into space, each weighing about two kilograms and each costing about A$1 million (which includes payment for transport to the Space Station). The tiny spacecraft will undertake valuable research gauging the densities of the atmosphere for a possibly as long as a year, before burning up on re-entry.

“In direct costs that we can account for, it has cost us about quarter of a million dollars in cash, and about three-quarters of a million dollars in kind,” said Dr Elias Aboutanios, the deputy director of the Australian Centre for Space Engineering Research and the scientist who led the University of NSW’s nano-sat project. “That includes everything. It’s amazing you can put a piece of hardware in space for a million dollars”. 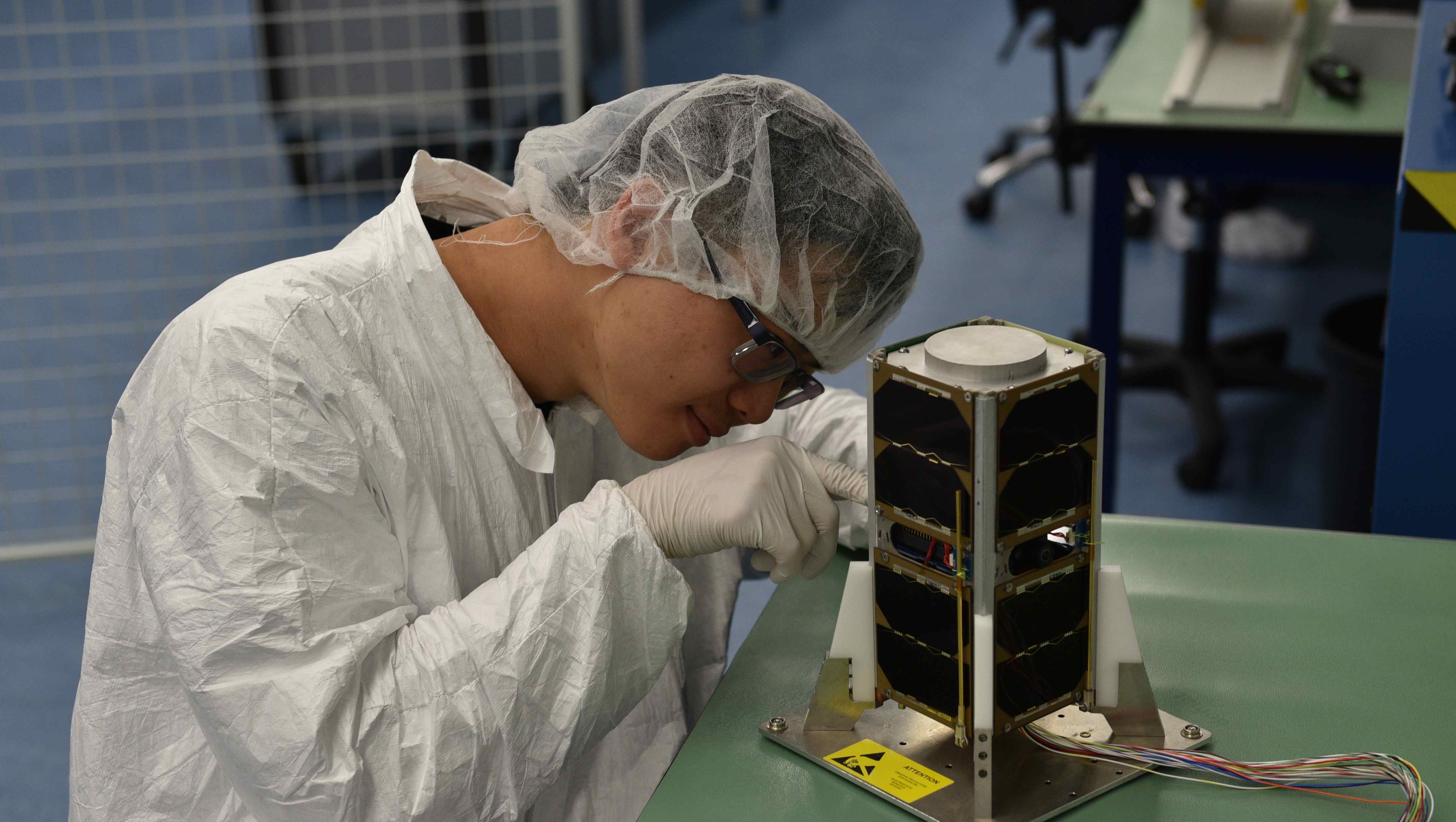 The first Australian spacecraft to make it into space since the FedSat satellite was launched in 2002, these tiny satellites have already ignited a new burst of astronautical interest in Australia where they are seen as the harbingers of a revolutionary and affordable thrust into orbit.

A grand cooperative effort by universities and research institutes in 23 nations, the European-led QB50 project was originally planned to comprise 50 of these miniature satellites floating in a string-of-pearls constellation. After they are pushed off the International Space Station in the weeks following the March voyage, they will disperse and orbit Earth at roughly 7.5 kilometres a second, gathering valuable scientific data as they roam.

This first group of 28 QB50 nano-satellites – spacecraft known as CubeSats because they are made up of multiples of 10 x 10 x 11.35 cm cubic units — will take soundings in the largely unknown lower thermosphere, between 200 kilometres and 380 kilometres above Earth.

A second group of eight QB50 CubeSats is scheduled to be launched into space in April aboard the Indian PLSV Rocket, from Satish Dawan Space Centre.

These CubeSats cannot propel themselves, and once they are pushed off the International Space Station they will be at the mercy of gravity and drag, as well as solar radiation. Because they have slightly different shapes and weights, they are expected to drift at different rates.

Asian nations involved in the QB50 project include South Korea, Taiwan and, to a certain extent, China, although the two Chinese universities building QB50 CubeSats – Harbin University of Technology and Nanjing University of Science and Technology – have registered their spacecraft in Belgium.

Space has long been dominated by super-powers with super budgets, enabling the glorious push to the moon and paying for a Mars probe. More recently space-mad billionaires such as Elon Musk have joined the space race with rockets. Hundreds of times smaller, the miniaturised satellites herald a new age. India set a record on Wednesday (Feb 15) when its Polar Satellite Launch Vehicle rocket blasted off from the Satish Dhawan Space Centre with 104 satellites on board, nearly all CubeSats.

“Nano-sats in general and CubeSats in particular are giving Australia a second chance to enter this business,” Aboutanios said. “Nano-sats are putting space within the reach of very small players”.

The UNSW CubeSat team built a nano-satellite called ECO, and cooperated with other institutions on a second CubeSat.

“In the 50s, 60s, and 70s, countries were working hard to build their space capabilities”, Aboutanios told the Nikkei Asian Review. “But it was difficult. It was doable by first world powerful nations. Australia had space capabilities at that time, but gave up on the effort. We don’t want to make that mistake again”. It isn’t only a question of furthering humanity’s knowledge of space. It’s a question of profit as well.

“Globally, the space business is forecast to reach £400 billion by 2030”, Aboutanios said. “The UK is driving very hard to get a piece of that. And so should Australia”.

The CubeSat design was first proposed by US science professors in 1999 to allow graduate students to design, build, test and run a spacecraft with roughly the same capabilities as the first spacecraft, Sputnik. The first CubeSats were launched in 2003, and these days anyone can buy a CubeSat kit, marketed by the US firm Pumpkin.

The QB50 project was designed to capitalise on the size and cost advantages of the CubeSats. “One of the main purposes of the QB50 project is to achieve sustained and affordable access to space for small scale research space missions and planetary exploration”, the project’s mission statement said.

Space researchers around the world have embraced CubeSats and applauded their capabilities. “CubeSats, when you look at the trends, are exploding, they’re mushrooming in number,” Aboutanios said. “That’s Australia’s opportunity. We have no chance of competing with the likes of the US, Europe, China and Russia with the big satellites, satellites that cost hundreds of millions of dollars. But we can compete with nano-sats, and their share of the market is growing rapidly”.

Most of the QB50 nano-sats will carry one of three devices, or sensors, specified by the QB50 project – either a multi-needle Langmuir probe, an Ion-Neutral Mass Spectrometer (INMS), and a Flux-Probe experiment, all to gauge the densities of the lower thermosphere.

“We’ve chosen the Ion-Neutral Mass Spectrometer,” Aboutanios said. “As the satellite is ploughing through space, it collects particles in its path and measures their mass and then we can tell what atoms exist up there. The thermosphere is very little understood, and that’s why we’re doing this. This will improve our understanding many-fold.”

Each of these QB50 nano-sats will also carry one or more devices devised and manufactured by the university that built the tiny spacecraft.

“Instead, we have used a thermoplastic, and we’ve 3D-printed the frame of the satellite, and we coated it with nickel for conductivity. That gives us a light-weight, strong structure that we can rapidly make. We’re sending it up into space and we’re going to monitor how it behaves in the harsh environment of space”.