Honeymooners in Suvarnabhumi airport limbo pine for soil of England

Helen and Nathan Groves’ honeymoon suite is simple, to say the least. Two airport benches pushed together. A thin foam mattress laid over the top. Two small yellow pillows emblazoned with promotional logos, and a couple of thin tartan blankets. The whole contraption shoved up against a wall in the cavernous and windowless basement of Bangkok’s Suvarnabhumi airport, where daily life has been a round of queuing and disappointment, frustration and delay.

Teachers from outside Wolverhampton, the Groves spent their honeymoon in Phuket, Thailand’s tropical holiday island in the south. Bangkok was meant to be just a stop on their way home to the Midlands, not a ten-day debacle. The cloud of ash from the Icelandic volcano had already disrupted flights in Europe before the Groves left Phuket, but they had no idea there was a possibility of a lengthy airport sojourn. 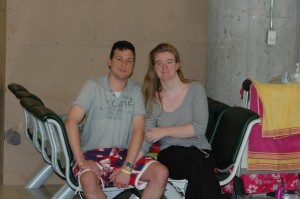 “We were meant to fly out on April 17,” says Mr Groves, aged 26. “Since then, they’ve kept telling us there were extra flights being put on. There was meant to be another flight this morning. Because we went up to the office, we could book on to this extra flight, but we’ve got these tickets for tomorrow. Anyway, it turned out there wasn’t actually another flight.”

The Groves spend their days stretched out on thin foam mattresses under the neon lights, listening to a rumble of construction from behind the board walls. An FCO spokesman estimated that 1500 British nationals were marooned in Bangkok, and 60 were sleeping at the airport. The British embassy has supplied mattresses, snacks, toys, the loan of paperback novels, and a team to help get passengers on planes. Suvarnabhumi airport staff have done their best to make the passengers comfortable with free food and water.

Many stranded passengers cannot afford to stay elsewhere; they have come to understand they will have difficulty obtaining compensation from airlines or insurance companies. Others are concerned about the political unrest in Bangkok, which has claimed 26 lives in recent weeks. With her ill husband and her two children, aged eight and ten, Lisa Hopwood was put up in a hotel in Silom, where a hail of grenades killed a woman last week. “They told us we couldn’t go out,” she said. Her family moved hotels, and now they are running out of time and money. “It’s credit cards now,” said Ms Hopwood, who is self-employed. “We don’t know what’s going to happen next.”

The sheer rigmarole of queuing to register for a flight, then queuing at the standby desk, over and over again, has taken a toll. It has apparently been essential to be present in person, so even those stranded passengers who were staying outside the airport spent most of their days commuting and queuing to get seats on flights.

The Groves spent two nights in a Bangkok hotel when they first found their flights home had been cancelled, but it was a noisy and unfortunate experience. Mr Groves said it had become clear they would get no compensation for the delays, so they decided to rough it at the airport.

“We’ve actually got one of the earlier dates; some people have to wait until the end of May,” he said. “I think it’s all the airlines.” Down in Suvarnabhumi’s basement there has been a lot of talk about airlines deliberately holding back seats from stranded passengers and selling the tickets at inflated rates to the desperate.

Scott Poulton, a fitness instructor from St Johns Wood in London, said he was so fed up with the constant uncertainty that he has chosen to fly to Rome, even though he had to buy his own ticket onwards to Britain.

Mr Groves said half the teachers from his 12-teacher school in Walsall were stranded in various parts of the world, unable to return in time for the start of term. He will be the last back, but the Groves do not want to chance their luck on expensive cross-Europe routes. They have seats on a flight leaving for Britain today, and their fingers are firmly crossed.

“It’s not confirmed,” Mr Groves said. “We’ve got the ticket, but they can’t say it’s definitely going to go.” For her part, Helen Groves, now just 24, has given up optimism. “Just because we’ve got that date, doesn’t mean we’ll get on a flight,” she said, with a half-smile. “I won’t believe it until my feet are on the soil of England.”