Defiant redshirts gear up for military onslaught on their Bangkok camp

Thousands of anti-government protesters were braced behind fortified barricades of car tires and sharpened bamboo staves in central Bangkok Sunday night in anticipation of an imminent assault by security forces. The leaders of the so-called Red Shirts protest movement had ordered their followers to abandon their signature red attire for ordinary clothes so that they would be harder to identify in the event of an attack.

Guards on the edges of their encampment in central Bangkok were asking for identification and checking visitors’ bags, as those behind the tyre walls prepared to face an assault that is likely to be led by the Thai Army.

Earlier yesterday Abhisit Vejjajiva, the Thai Prime Minister, had appeared on national television to warn that the protesters’ sprawling encampment in the heart of the city would be dismantled. 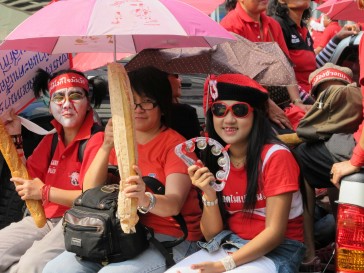 The pre-recorded address was interrupted for a while, possibly deliberately, but it was soon screened again from the beginning.

“In my heart I am still Red,” he said. “But we told them [the protesters] if they wore red they could be arrested.”

He added that he was determined to stay at the encampment to the bitter end: “It is better to die than live like a dog.”

After a series of grenade attacks in the commercial center of the city last week Mr Abhisit is under increasing pressure to bring an end to weeks of protests that have paralyzed the Thai capital and led to at least 26 deaths and scores of injuries on both sides.

Over the weekend he rejected an offer from the Red Shirts, whose movement emerged after the army ousted Thaksin Shinawatra, the former Prime Minister, in 2006, to step down and hold elections within three months.

The protesters’ stand-off with the Government reflects a deeply divided society, which has raised the specter of possible civil war.

During yesterday’s television broadcast General Anupong Paochinda, the army chief, acknowledged for the first time that some retired and active officers had joined the protest. However, there was little visible evidence of a professional military presence behind the barricades last night.

Pismai Srisuk, a Bangkok housewife with grown-up children, said she had heard the military would attack the encampment but she was not afraid to face them. “I think there’s too many people; there will not be shooting,” she said. “I want to fight for democracy.”

The unrest has damaged Bangkok’s fragile reputation as a tourist destination and several nations have warned against traveling to Thailand.

· About 300 Britons, stranded by last week’s closure of British airspace, are camped in the basement of Bangkok airport, unable to find seats on flights home, or too frightened or poor to head into the city

· Chris Trace, 50, said: “I was due back on Monday for my mother’s funeral, but nobody at Thai Airways cares about that. There are tickets out there, but they are costing nearly £3,000”

· Michael Evans, 69, went to Thailand with his wife Caroline, to celebrate their 45th wedding anniversary. Now he is sleeping at the airport with his wife in a nearby hotel. “Things are tense. I’d rather save my marriage,” he said, “and I am only half-joking”

· Over the weekend Tesco and Boots helped out, supplying bedding and toiletries. The British Embassy handed out books and toys for families with children. But nothing could hide passengers’ anger. A sign held by one read: “Remind the British Government and press that we still exist”