She’s just 26 years old, but, barring a miracle, she is destined to spend the next 26 years of her life in one of Burma’s notorious jails. Since her arrest late in 2009, Hla Hla Win has been tortured, she has been on a hunger strike, and she has been sent to hospital. Like so many in Burma’s prisons, her life is an unfolding disaster. Her crime? She interviewed some monks, and rode an improperly registered motor-scooter. 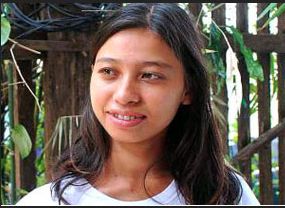 She is one of at least 2,200 political prisoners in Burma; locked up for reporting the news, for calling for democracy, for writing a book, and for countless other ephemeral infractions. Their best hope now is for an amnesty; perhaps when Burma’s new government is formed in a month or so. The nation’s first elections in 20 years, held in early November, were riddled with vote stuffing and other types of electoral fraud, but the military regime may decide to mark the change to ‘democracy’ with some seemingly magnanimous act.

Once Burma’s best-known political prisoner, democracy campaigner Aung San Suu Kyi is now taking every opportunity to ratchet up the pressure for an amnesty. Using her newly-won freedom to raise the plight of those still behind bars, she has said: “If my people are not free, how can I say I am free? Either we are all free together or we are not free together”.

Yet Bo Kyi, joint secretary of the Assistance Association for Political Prisoners (Burma), says Suu Kyi can’t work miracles alone. The Burmese public must somehow push for change, regardless of the danger. “She is trying to raise awareness, but that will take time,” the Thailand-based activist says. “There must be domestic and international pressure; international pressure alone is not enough. The UN issuing a statement is not enough. They need to take action.”

But it’s a battle against an implacable force. Burma’s ambassador to the United Nations, Thant Kyaw, in October flatly denied the very existence of political prisoners in the nation officially renamed Myanmar. “There are no political prisoners in Myanmar, and no individual has been incarcerated simply for his or her political beliefs,” he reportedly told a UN committee.

So where to slot Zarganar, or “Tweezers”, a famous comedian and satirist, who was arrested in 2008 for criticising the junta’s tardy and reluctant response to Cyclone Nargis – a disaster which killed at least 140,000 Burmese people? Originally sentenced to 59 years in prison for “public order offences”, Zarganar’s punishment was later reduced to a 35-year prison term. Or U Khun Tun Oo, a senior political representative of the Shan people, a minority ethnic group in Burma? He met with other leaders in 2005 to discuss the regime’s long-touted transition to democracy. He was convicted of treason and defamation and sentenced to 93 years in prison. Hundreds more have been jailed for equally tiny transgressions.

“They might grant an amnesty,” Bo Kyi says cautiously, “but until now we haven’t heard anything”. Once a political prisoner himself “for just seven years”, he wants more of a push to relieve those convicted of acts that elsewhere would be considered simple politics or journalism, or charity, or selflessness.

The young woman journalist Hla Hla Win turned to activism after the Saffron uprising in 2007, when Burma’s monks took to the streets and the world watched and waited for the final bloody crackdown. Her imagination was fired by the bravery of the undercover video journalists who dodged the military and sent film clips out to the world. She decided to learn how to use a camera and work for the exiled Democratic Voice of Burma news outlet.

In late 2008, in the Thai border town of Mae Sot, Aye Min Soe taught her how to film and put together a news story. He had been jailed in Burma for four years for ‘subversive student activities’, before working as a DVB journalist in Burma and finally fleeing to Thailand. He remembers Hla Hla Win as a friendly and happy young Burmese woman who was keen to learn.

Months later, in September 2009, Hla Hla Win and a companion went to a monastery in Pakokku, the crucible of the uprising, to interview monks. They were seen, and inevitably arrested. Aye Min Soe says Hla Hla Win ran out of luck. “She was in the wrong place,” he says. “She took a risk because she wanted to make a news piece about the Saffron revolution”.

Bo Kyi says Hla Hla Win has been tortured. Although he doesn’t know exactly how she has suffered, he knows from his own grim experience that it could be anything from savage beatings, to food and water deprivation, to being made to stand upright for hours. “She was on a hunger strike, but there wasn’t very much damage for her. She is tough.”

Aye Min Soe says the best and only hope for Hla Hla Win is an amnesty. “In 1992 I was in prison and the government leader changed,” he adds. “The new leader Than Shwe announced a small amnesty.” He believes it might happen again because Than Shwe is still Burma’s paramount general, and Hla Hla Win’s profession might mean she will be chosen for release. “She is a journalist, so she’s not so dangerous; the government is more afraid of activists.”