A taupe knit dress with sleeves of cascading ruffles, a translucent silk bodice adorned with appliquéd silver hearts, a structured deep purple silk bustier, and a trench coat with a super-hero cape: just a few examples from this season’s eclectic Thai fashion collections.

Bangkok is the heart of Thailand’s design matrix. The boutiques of high-end design labels, such as Sretsis, Senada and Disaya, can be found in the luxury Gaysorn shopping centre, in central Bangkok. The labels sell internationally, with celebrity followers around the world pouncing on the inspired collections for their style, sheer luxury and attention to detail. 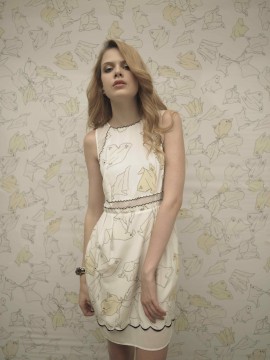 Disaya Sorakraikitikul, the force behind Disaya, is one of Thailand’s best-known designers. With degrees in fashion design from Saint Martins College in London, she has developed an extremely distinctive style. Disaya has been worn by celebrities like Katy Perry, Paris Hilton and Amy Winehouse (who wore a red and cream Disaya bustier dress on a recent album cover). This year’s Autumn-Winter Disaya collection features crushed velvet, ruched and draped silks and satins, and distinctive slashes and slits in enduringly elegant combinations.

Wearing steep heels and a magenta draped dress, Disaya says Thai fashion has a unique unforced flavour, and high-end Thai designers often prefer to steer away from artificial fibres. “I like natural fabrics, like silk and cotton; we have silk every season,” she says. “It’s mostly silk chiffon and silk satin; not so much Thai silk.”

Though the Thai fashion industry is still in its infancy, Disaya says Thailand has certain advantages over the rest of the world. “I think we’re still growing,” she says. “I think Thai people are very good at intricate stuff, hand sewing and beading and so on.” In the five years since her label was launched, Disaya has been inspired by teddy-bears, skulls, and pirates, and one of the fabrics in a recent collection is printed with star-maps.

Chanita Preechawitayakul, whose Senada Theory label has a flagship store in the Gaysorn centre, has a degree in biochemistry, but she has been central to the Thai fashion world for many years. A slight woman in a floating blouse and short trousers, she says her labels, Senada and Senada Theory — based on the Sanskrit version of her 19-year-old daughter’s name — have been worn by Kylie Minogue, Naomi Watt, and Isabelle Huppert, amongst others, and she says the essence of her style is femininity.

Design is her passion, and resuscitating vintage style her inspiration. “I saw the 1980s-90s as the time of the brands,” she says. “But I didn’t like to wear logos. I wanted something different.” Largely self-taught, Chanita works with a wide range of imported fabrics, but all her collections are manufactured in Thailand. She adores the luxury of hand-detailing; of beads and embroidery, of the finesse of a hand-tucked flounce. 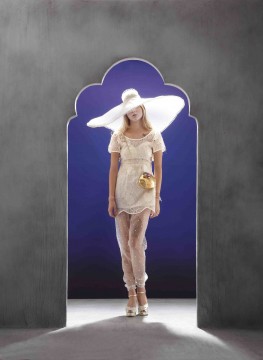 Sretsis, which spells “sisters” backwards, is another sought-after label internationally, and also sold from a flagship store in the Gaysorn centre, but a number of Thai designers sell only in Thailand. The designers from the group known in Bangkok as  “The Fashion Rebels – in Mob We Trust” shine with an inspired array of fashion imagination. Based in the Siam Center, a few blocks from the Gaysorn shopping centre, the rebels are a mix of the up-and-coming and the firmly established.

Thailand’s Kloset label is the brainchild of Mollika Ruangkritya, a designer who has created style since she was a child, and Kloset, too, has an outlet in the Siam Center, as well as selling in some of Bangkok’s best department stores. Both the Siam Center and Gaysorn were left largely untouched by the violence in central Bangkok in May, although the massive CentralWorld mall and the Zen department store, located between the two, were torched.

“I love all kinds of handicrafts,” Mollika says. “When I was young I made dolls for myself, from old t-shirts and headbands.” Kloset was launched eight years ago, and the label sells both internationally and domestically, but Mollika prefers to concentrate on her Thai clientele, and she has another large Bangkok retail outlet planned for later this year.

Wearing a flattering skirt patterned with in white, grey and yellow with garden tools (from this year’s Spring-Summer collection), Mollika is naturally stylish – with a twist, echoing the feel of her collections, and she is a passionate promoter of Thai style.

“Once, I don’t think Thai people accepted Thai brands as they have today. After international magazines featured our products; that’s when Thais started to accept our labels.”

The three creative Sukhahuta sisters of the Sretsis label have become justly famous in the Thai fashion world.

Based in Bangkok, the label sells around the world and designer Pim Sukhahuta’s collections of saucy, frothy, fantasy clothes, often with a new quirk, have caught the eye of legions of fashion buyers and celebrities, including Beyonce Knowles. This season’s collection includes floating greys and pastels in a range notable for its sheer originality.

Kly, the eldest of the three, says the sisters want to do their bit to boost Bangkok’s reputation in international fashion circles. When Nicky Hilton and her famous sister Paris bought the same chambray buttoned dress, designed by middle sister Pim for the Sretsis label, the US tabloids jumped on it, and the Sretsis name became known for interesting and unusual women’s wear.

The trio founded the label in 2002, turning a life-long obsession with fashion into a commercial success. “There’s three of us, three sisters, we work together,” says Pim, who trained at the Parsons design school in New York. “I started off, I just love clothes.” Kly is in charge of marketing and promoting the Sretsis brand. Matina is the youngest of the three sisters, and her Matina Amanita jewellery weaves a glittering trail through the Sretsis collections.