To stretch his legs and gulp a few lungsful of fresh air during Hong Kong’s lockdown-lite, Edwin Lau Che-feng went walking in parks and along Hong Kong’s greener streets. Like other Hong Kongers, he mostly abided by social distancing restrictions during the coronavirus crisis. He stayed home, avoided shopping centres and steered clear of crowds. But the natural world can have a calming effect in chaotic times, and he felt that on deserted tree-lined streets and paths he could breathe deeply.

“You can take down your mask in the fresh air, without too many people,” says the founder of small Hong Kong conservation organisation The Green Earth. “You can physically and mentally relax.”

The virus restrictions that shut down much of Hong Kong have kindled an appreciation of Hong Kong’s parks and public spaces, as well as for the city’s street trees that provide attractive and cooling shade in the often crippling heat of this subtropical zone.

“People like to sit under the trees and enjoy their lunch, just like in many western countries,” Lau says. “The canopies provide shade. Many studies have found that a big tree acts like a natural air conditioner and cools the environment.”

The urban heart of Hong Kong is a congested warren of skyscrapers and narrow, traffic-clogged streets, many largely leafless. There are now far more city trees than there were even a few decades ago, thanks to a Greening Hong Kong masterplan, but the battle for green shade continues.

The recent shutdown has kindled a new appreciation of the natural world for many city-dwellers who were isolated in tiny apartments for weeks on end.

“Suddenly it’s become something important, but how that’s going to get translated into changing the priorities for the transport department and highways department is another matter,” says Hong Kong University landscape architecture lecturer Gavin Coates, who in the past played an integral role in designing the Greening Hong Kong masterplan. 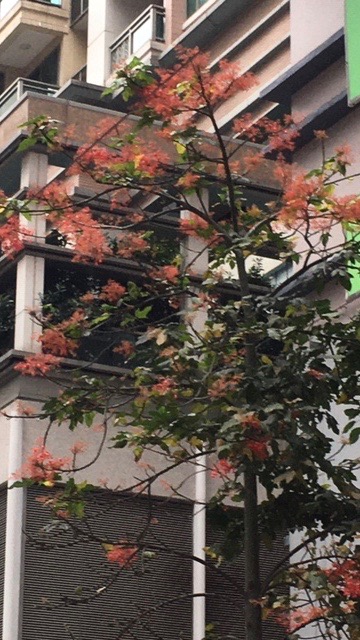 As far back as 1867, the Hong Kong Colonial Surgeon’s report lamented the year’s typhoons that had damaged “the health giving trees which are so highly cherished, and can be but badly spared”.

In more recent times, though, trees have not been so “highly cherished”. The region has been through an age of hyper-development, with skyscrapers thrown up and the sound of jackhammers and pile-drivers providing a constant background soundtrack to Hong Kong life, and still the construction is underway – tunnels and flyovers march ever onward. Trees, it seems, have been seen as peripherally important.

“People say we want more trees, we want more greenery, but then there’s a strong NIMBY factor, ‘I want the city to be green and I want more trees, but not in front of my shop’,” says Coates, who points out the Hong Kong government could open up vast amounts of space in roads for trees simply by banning on-street parking.

“No one has the gumption to say, ‘well, sorry, but we’re going to green the city and if you want to park your car you can pay to put it in a car park’.”

When he was working on the Greening Hong Kong masterplan, Coates says, he wasn’t even allowed to use the phrase “footpath widening”. “Everywhere that’s available for vehicles is sacrosanct and must not be infringed upon,” he adds, pointing out that car-owners are a wealthy and disproportionately influential segment of Hong Kong’s population.

Elsewhere in the world, the slamming impact of the virus and the subsequent lockdown has driven huge changes to the way people enjoy life without a roof over their heads, on foot or on their bicycles.

The northern Italian metropolis of Milan has announced 35km (22 miles) of streets will be transformed by a rapid, experimental citywide expansion of cycling and walking space. In Dublin, Ireland, large parts of the city centre have been annexed for pedestrians and cyclists.In the Australian city of Sydney, A$15 million has been allocated to help provide more space for people to walk, cycle and exercise, with new cycle lands, pedestrian-only streets and wider footpaths.

Many long-term studies by academics around the world have found interacting with nature is broadly beneficial for people’s physical and mental health, increasing serenity and decreasing stress.

A study published in the medical journal The Lancet Planetary Health in April used global data to predict that increasing the tree canopy in the US city of Philadelphia by 30 per cent could prevent as many as 400 premature deaths every year. With a population of 1.6 million people, Philadelphia is known to be one of the poorer cities in the US.

Meanwhile, many thousands of kilometres away in Japan, taking time to be with trees has long been seen as beneficial. The term “forest bathing” or “shinrin-yoku” coined in the 1980s and describes a period of time spent connecting physically and psychologically with nature and emerging mentally refreshed.

Hong Kong’s street trees and city park trees do more than look good and potentially confer serenity, they have a whack at air pollution as well. Important in Hong Kong where streetside air quality is often poor, trees are known to minimise air pollution by trapping breathable air pollution particles until they can be washed away by rain.

The Hong Kong government understands trees’ air cleaning abilities. A spokesperson for Hong Kong’s Civil Engineering and Development Department (CEDD), which launched the first Greening Masterplan in 2004 to improve the city environment, says there is a “close relationship between greening and improvement in air quality” and “green plants can act as a sponge by sequestering carbon dioxide in the atmosphere while releasing oxygen”.

Most authorities in Hong Kong agree, in theory anyway, that sufficient numbers of trees and shrubs are essential for a healthy cityscape.

For its part, Hong Kong’s Development Bureau (DEVB) says the government “strives to ensure that despite the rapid pace of urban development, green space does not get overlooked in our city” by mandating the allocation of space for roadside plantings and greenery in private developments.

The government’s tree management departments, it adds, already care for 1.7 million trees, outside those in country parks.

Still, the mandate applies to new areas, not the crammed inner city. Paul Zimmerman, who has been an elected Hong Kong councilor since 2010, says street tree shade is a boon in Hong Kong’s searing summer heat but it can be hard finding the space for plantings, both above and below ground.

With millions of people, buildings and vehicles squeezed into a limited area, Hong Kong has limited road space, he says.

“Our road network is also the conduit for every utility, every pipe and every cable in the city,” Zimmerman adds. “Trees have to fight with many different utilities lying underneath.” There are also tunnels and bypasses to contend with, and problems of drainage on reclaimed land.

“More than anything else, shade of the public space is one of the great benefits of trees,” he says. “We have a fairly harsh climate; when the sun is out, it’s really hot, burning hot.”

A band of dedicated Hongkongers, Zimmerman adds, has been fighting for more space for pedestrians, broader footpaths and walkways for those people who spend a lot of time commuting by public transport and on foot: the vast majority of the population.

“If you say I’m going to plant trees and take away road space, then that’s a challenge,” Zimmerman says. “We’re trying to get more of the road space for footways.”

When trees are planted, government authorities often prefer easy-maintenance species, preferably with small canopies and little shedding of leaves or debris, experts say. Tree champions would like to see more of the graceful, spreading Chinese banyans and red-flowering flame trees planted along streets.

“There isn’t enough effort made by government, especially the maintenance agents – Leisure and Cultural Services Department – to allow for very large crown trees to grow and provide shade in locations where people walk,” Zimmerman says, referring to harbourside paths among other frequented walkways.

“They would point the finger at the need for emergency vehicle access, which I believe could be overcome. I don’t think enough planning goes into it.”