Somebody familiar with the tiny red-dirt town of Marree is good at keeping a giant secret. Marree, population 150, sits at the junction of the Oodnadatta and Birdsville tracks in the remote upper north of South Australia, east of one of Australia’s great mysteries: the “Marree Man”, a 4.2km-long reproduction of a giant Aboriginal figure carved into a desert plateau 20 years ago. It was revealed to the world on June 26, 1998, by a pilot who spotted the substrata of white chalk ­exposed in the red dirt to produce an enormous image.

The Man himself is no secret now (Qantas and Virgin planes fly over him on their way to Asia, and the Man even has his own Facebook page) but his origins remain obscure. It can be said with reasonable certainty that only someone with professional expertise was involved in the planning and creation of the huge geoglyph — the technical term for a large ­design or motif produced on the ground. Scoring a huge design into the desert requires technical understanding; plotting the design over kilometres of ground would need expert surveying methods and almost certainly a global positioning system. 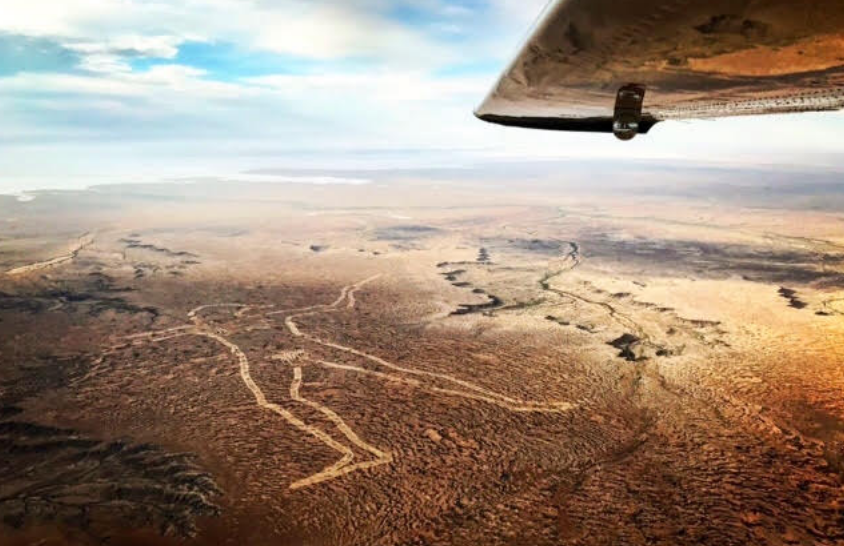 Was the original design, of an indigenous man standing with a throwing stick held aloft, drawn by a well-known, but now deceased, Aboriginal artist from Alice Springs? Or was it cobbled toge­th­er from drawings found in a ­library book? Was the army ­involved in transferring the design on to the plateau? Or maybe mining company engineers or academics? Or Americans?

Two years ago, adventurer and entrepreneur Dick Smith decided to find out whodunit. Smith and his team set up a private and comprehensive website that includes exhaustive lists of contacts, images, videos and cuttings. Yet, despite huge amounts of work and research, the makers of Marree Man remain largely ­hidden, leaving Smith stumped but not defeated. His ­research continues and he is offering a $5000 ­reward for any evidence on who conceived and executed the artwork.

Investigators are working with an odd assortment of facts. Even before Marree Man was first seen, a series of faxes and letters was sent to the Marree Hotel and to Adelaide newspaper The Advertiser. Headed “press release”, the anonymous faxes promoted the giant geoglyph, saying “it appears to be the world’s largest work of art”, and ­referring to it as “Stuart’s Giant”, an allusion to John McDouall ­Stuart, a Scottish explorer who traversed inland Australia in the 1800s.

Oddly, the faxes appear to be written by an American, with US spelling and references in miles rather than kilometres.

Another clue was buried at Cerne Abbas in England, home to the Cerne Abbas Giant, a 55m-long geoglyph of a naked man with a prominent erection. Yet none of these faxes or so-called clues even hinted at the identity of the Marree Man makers.

Pilot Trevor Wright has the aircraft charter business Wrightsair out of William Creek, northwest of Marree, and he first saw Marree Man when he flew over it in 1998. Originally happy to talk about Marree Man, he soon had second thoughts and sent an email “withdrawing” the interview with The Australian. Since a lot of Wrights­air work ­consists of scenic flights over Lake Eyre and other sights in the area, Wright stood to benefit from the original Marree Man ­geoglyph, which might ­explain his reluctance to speak publicly on the matter. In the sparse and scattered populations of South Aust­ralia’s upper north, everyone knows everyone and feelings can run high.

In a conversation following his email retracting his interview, Wright agreed that one quote could be used in this article: “The flow-on effects from the Marree Man have in my opinion increased tourism and employment in the upper north of South Australia, and hopefully the government and the Arabana people will ­decide to continue maintaining it.”

Wright was a little more forthcoming in an earlier interview with independent filmmaker Damon Smith, conceding that he played a role in the 2016 restoration of the Marree Man, along with Phil Turner, who has owned the Marree Hotel for seven years. This essentially involved regrading the outlines of Marree Man, which had blurred across time. Wright and Turner got into trouble for this ­restoration — for damaging desert grasses — and forked out a lot of money on legal bills before the new South Australian government finished with the case. “Phil was the main driver of it, and I was in it as well,” Wright said about the restoration in the Smith interview. “I think it was too iconic, at the end of the day, to let it go.”

Even so, Wright denied having anything to do with creating the original geoglyph in 1998. “I can say to you honestly that I can’t ­remember any details that would be of any help to you,” he said in the Smith interview, and a little later: “To the best of my knowledge, I had nothing to do with the Marree Man.”

Turner readily admits to restoring Marree Man in 2016, which earned him a magistrate’s warrant on the charge of the “illegal ­removal of 25ha of native grass”, carrying a maximum fine of $100,000. Before the charge was dropped, Turner lodged a Freedom of Information claim with the South Australian environment ­department which, after some months, he says, resulted in a notification that of the 833 relevant documents held by the department, 822 were apparently “too sensitive to release to the public”.

“They’ve emailed to me to say (the file) is locked in a safe never to see the light of day,” Turner says. “I can only assume it’s some evidence.” In an official response, the South Australian environment ­department said it had been alerted to the geoglyph restoration, or the “illegal clearance of native vegetation”, by a complainant; that the investigation had concluded with an enforcement notice that prohibited any further native vegetation clearance without approval, and that the documents withheld from Turner’s FOI ­request were either already publicly available or “exempt documents” under the FOI Act, which might include documents affecting personal or business affairs, documents with legal professional privilege and documents affecting law enforcement and public safety.

Like most others connected to the Marree Man, Turner says he doesn’t know who created the original geoglyph. He does believe, though, that Aboriginal artist Bardius Goldberg had something to do with the design. The eccentric and creative Goldberg lived in Alice Springs and died in 2002 ­(apparently from septicaemia that set in after a bar fight), but he had said he wanted to create an artwork that could be seen from space. “Friends of Bardius who have pulled into the pub over the years have confirmed he was ­behind it,” Turner says. Goldberg’s daughter, who doesn’t speak to the press, apparently also believes her father had a hand in the design, yet there is no conclusive evidence.

Turner says he believes the 1998 Marree Man geoglyph was created to brand the land at a time when there were several competing native title claims in the district. He says he thinks the actual creation involved two groups: one lot that came up with the design and one lot that carved the design into the red dirt of the plateau.

He says that when he was working on the restoration (which, in the end, cost a total of $6400) he found the outline of the original geoglyph had been marked out with between 10,000 and 15,000 bamboo skewers. “We found the pink flagging tape tied to some of the skewers that were in the ground,” he says. The environment department investigation into the restoration was extremely stressful, he adds, and he had been warned not to do it again.

“But in recent weeks the chief executive of the South Australian Tourist Commission, the regional director and the executive director of marketing came up; we flew them over Marree Man and they were absolutely stunned,” he says. “Now they’re free to promote and market this extraordinary asset for South Australian tourism.”

Dick Smith has spent a lot of time pondering the origins of ­Marree Man, and he and his team have investigated every lead they can find, interviewing almost everyone linked with the work, however tenuous the connection. They have yet to find any definitive evidence or come to any solid conclusions.

“After two years meeting people, I’m realising that probably one or two weren’t telling me the truth,” Smith says.

Smith is certain the design came from the outline of an ­ancient statue, merged with details from an illustration in Finlayson’s book. He’s sure the work was complicated and costly, done in the days before 2000, when then US president Bill Clinton relaxed the rules on the global positioning ­system, a US invention. Clinton’s decision effectively meant everyone in the world, if they had the right equipment, could ­determine their exact position in the world.

Before that moment, the work was complicated and required ­expensive equipment, which has given rise to the theory that Marree Man was created by scientists or academics who wanted to test a global positioning system in some way. The answer may well be that prosaic.

“I believe it’s quite a few people who did it,” Smith says. “I reckon some blokes were standing around in a university or a government ­department and said, ‘Hey, we want to test this software, let’s go and put a giant like Cerne Abbas in the desert.’ ”