Considered an important medicine in China for 2,000 years, rhubarb has been discovered over and over again in its long history. Full of oxalic acid, rhubarb leaves might have poisoned a US president; smuggling valuable rhubarb root warranted death in Russia, and, centuries later, when the heavily sugared stalks were used in desserts, rhubarb was mercilessly lampooned as a horrible British school pudding.

Rhubarb has now come full circle, from important medicinal laxative to dessert delicacy, and the vegetable’s pink stalks are served in fine restaurants, perhaps roasted with orange and crystallised puff pastry, poached and served with melon granita, or simmered with orange juice and presented as sweet soup.

Around much longer as a medicine than it has been enjoyed as a dessert, rhubarb is noted in what is thought to be the first text on Chinese traditional medicine, the Herbal Classic of Shen Nong, said to date from the 3rdcentury AD. Known as the Divine Farmer, the mystical and mythical Shen Nong is believed to have lived around 2800BC. According to Chinese legend, Shen Nong tested many types of potentially medicinal plants on himself. He classified rhubarb as a herb, and noted its uses: “to cure diarrhoea, like Glauber’s salt and the roots and rhizomes of rhubarb”. 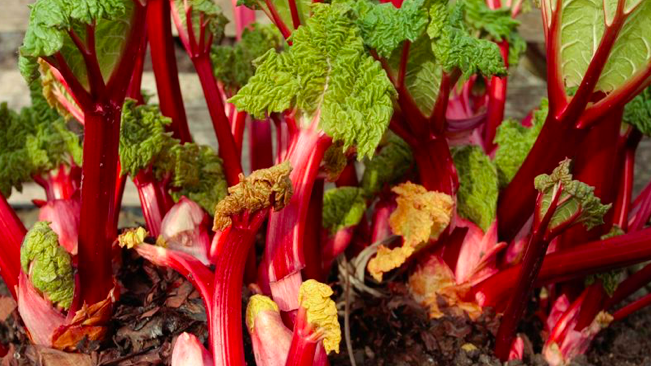 These days, rhubarb root is still used in Chinese traditional medicine and still used by Chinese people around the world to treat stomach ailments, especially constipation.

Yibin Feng, acting director of the University of Hong Kong’s School of Chinese Medicine, says gastro-intestinal upsets are regularly treated with rhubarb root. “Of course, it’s a famous herbal,” he says. “We are also using it today, it’s a very popular herbal.”

Used in decoctions, in soups and as extracts, rhubarb root is prescribed by Chinese traditional medicine practitioners, he says, to treat ailments as varied as constipation and bleeding ulcers.

Ancient Greeks valued medicinal rhubarb; Romans called it Rha barbarum – from the barbarians who lived beyond the Rha or present-day Volga river in Russia. Arab medics from the ninth century used rhubarb root purges, and much later the Italian explorer Marco Polo found a thriving trade in the leafy vegetable in Mongolia and China in the 13thcentury.

The explorer found the plant, known in China as the “Great Yellow” – perhaps because of its thick yellowish roots, in the land of the Tangut people in Mongolia and in the far north of China, west of the present-day city of Beijing. “Over all the mountains of this province rhubarb is found in great abundance, and thither merchants come to buy it, and carry it thence all over the world,” Marco Polo wrote.

Over time, as word spread, rhubarb became a highly sought-after and prohibitively expensive medicine in Europe. In France, by the 1500s, rhubarb root was ten times as expensive as cinnamon and four times as expensive as saffron. The cost was high partly because rhubarb was imported via long caravan routes from the east via Turkey and Russia. In the 1600s, Russia saw the value in establishing a valuable monopoly over the rhubarb trade in Europe, and breaking the monopoly was punishable by death.

Emma Kay, a British food historian who founded the Museum of Kitchenalia in the Cotswolds, says rhubarb was smuggled into Britain from Russia by a Scottish doctor called James Mounsey, who set up a practice in Moscow in the 1700s. The doctor treated both Tsar Peter the Great and Catherine, Peter’s second wife and successor.

“Following the Tsar’s death (perhaps contrived by Catherine and her lover), Mounsey was put in an awkward position, facing exile or death by association and managed to persuade Catherine to retire him on the grounds of ill health,” Kay says.

Mounsey then carried several pounds of rhubarb seed from Russia to Scotland, and he was awarded a gold medal for his pains, but Kay says he spent the rest of life in fear of being caught and punished by Russians.

Rhubarb was a wonder plant in those days, regarded as a useful medicine in Europe, and later, a tasty tart and pie filling as well. “Just as we once used leeches and cupping to purge bodies of substances thought to poison the body, rhubarb provided a hugely popular alternative form of purging, a trend which lasted into the 20th century,” Kay says.

By the 1700s, rhubarb came into its own as a food, a popular and delicious alternative to gooseberries. Rhubarb tarts, Kay adds, were included in The English Art of Cookery cookbook, published in 1788 and written by Richard Briggs, a well-known cook of the time.

In his tart recipe, Briggs wrote: “Take the stalks off the rhubarb that grows in the garden. Peel the skin off & cut them the size of a gooseberry, put them into china or earthenware patty pans, with sugar over them, & put on a paste either puff or tart, ice them, & bake them the same as green gooseberries, & they will eat like them.” Kay notes that when Briggs wrote about “icing” the tarts, he simply meant brushing beaten egg whites, with or without sugar, over the pastry.

Rhubarb was also gaining ground as a food in the US, even the leaves – full of bitter, and potentially dangerous oxalic acid. US President Thomas Jefferson, whose Monticello estate in Virginia is still open to the public, enjoyed eating rhubarb leaves. In April 1809, he noted the day’s plantings, including a “row of rheum undulatum, esculent rhubarb. the leaves excellent as Spinach.”

Oxalic acid gives rhubarb its delicious tart taste, but most experts now warn that eating the large acid-loaded leaves is not advised. The acid can adversely affect organs, including the kidneys, and can lead to kidney stones and, potentially, death. Jefferson died in 1826 at the age of 83 from a combination of ailments, including a kidney infection.

During the food shortages of WWI, British authorities encouraged people to eat rhubarb leaves, resulting in several poisonings and deaths. 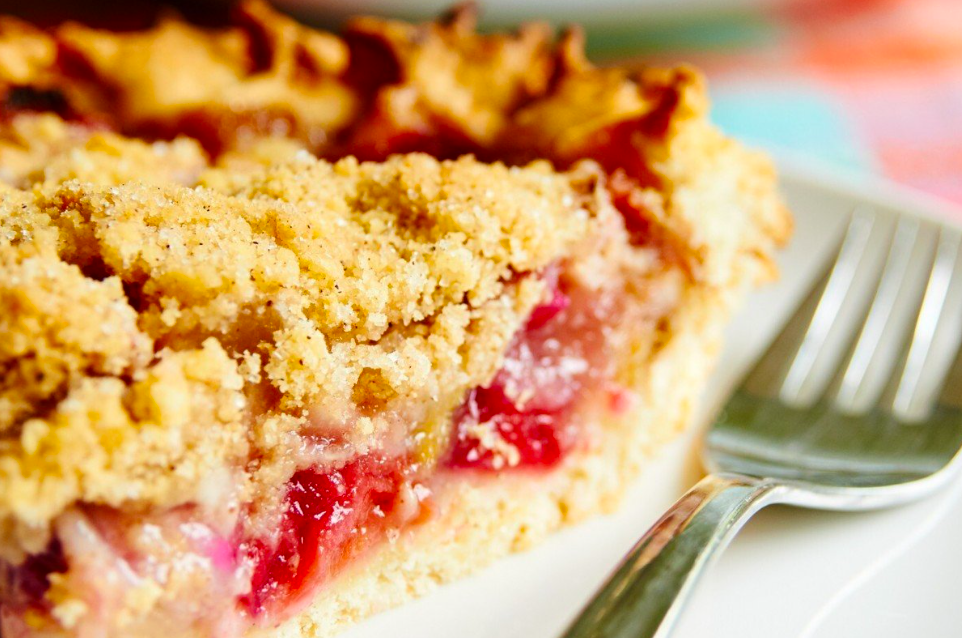 Even so, the attractive pink rhubarb stalks, containing far less acid, continued to be a popular dessert ingredient, both in Britain and in the US. Often called the pie plant in parts of America, rhubarb is often paired with sweeter strawberries, and strawberry and rhubarb pie, often seen with a fancy lattice-work top, is a favourite across the US.

Karys Logue, a chef with Black Sheep in Hong Kong, grew up eating rhubarb pie. “As a kid that’s the only way I had ever eaten rhubarb, as rhubarb pie,” she remembers. “My grandmother used to can and preserve rhubarb jam.”

“I’ve done plated desserts with rhubarb at a variety of different restaurants I’ve worked at, in New York and around the world, over the years, and when I first came onto the team at Black Sheep I thought it would be fun to do a pie from my childhood,” Logue says.

Balancing rhubarb’s astringent bitterness, adored by some people, is a simply a matter of adding sweetener – in greater or lesser amounts. “Luckily in the pastry kitchen you have plenty of sweet ingredients in your arsenal,” Logue says

“For me the colour of rhubarb is so beautiful. I like to wash it and use the peel to make a syrup, and then poach it in its own syrup so it infuses not only with the colour, but with the strong flavouring: I think it’s just really a lovely ingredient.”