Could it get any more poetic?

Sitting on an open verandah, drinking a bottle of Yunnan’s Windflower Sun and Moon lager, gazing across a garden of deepening shadows to the distant Jade Dragon Snow Mountain range: only a Chinese Coleridge could do this scene justice.

The Bruce Chalet in Shuhe Old Town, on the outskirts of Lijiang in Yunnan (nowhere near Xanadu), is set almost on the edge of a field. Inspired by the architecture of the Naxi, the local people of the region, the 12-room hotel has stone verandah floors, wooden pillars and grey barrel tile roofs with arched corners. Built around a green and leafy court-yard, the rooms face inwards to the garden and the line of mountains dominates the horizon.

Originally from Hong Kong, Bruce Chan has been seduced by the poetry of wild Yunnan. He first started making the trek to Lijiang in 2007, and found the district “lovely”. He visited again and again, and eventually left his merchandising job in Hong Kong and moved to Yunnan for good in 2009. 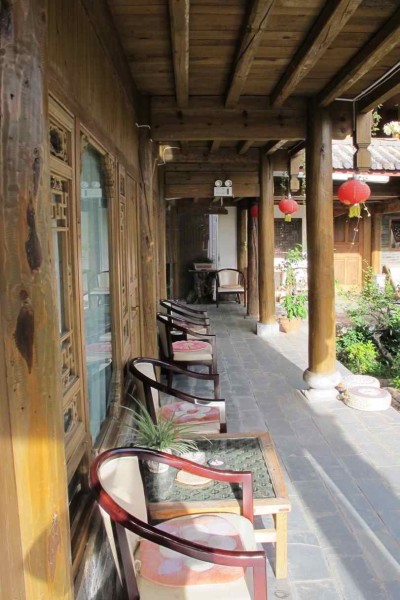 Three years ago, after overseeing 12 months of construction work, the 36-year-old opened the Bruce Chalet in Shuhe. A year ago he married Bella, who often cooks the hotel’s delicious breakfasts of eggs, or toast, or noodles – there’s fruit and Naxi delicacies as well, including a sort of fried cheese arrangement. But guests who want lunch or dinner will have to walk the five minutes or so into the middle of Shuhe.

Chan has settled into this semi-rural life, a far cry from the skyscrapers of his Hong Kong home, and he’s on hand most of the time at the hotel, welcoming guests of all nationalities, dispensing advice, and organising tours and car hire.

He will send a car to the airport to meet visitors, and it’s probably a wise move to take advantage of this service. We caught taxis to the hotel from Lijiang on various occasions, and twice the drivers managed to get completely lost, even with a map and further directions by telephone from the hotel staff. One of the hotel’s staff members, an energetic young man, came out on his pushbike and found our taxi circling aimlessly at the wrong end of town. This bike rider led us to the hotel, and then smilingly declined any money for his assistance.

What’s special about the rooms?

Apparently decorated in the “Naxi style”, the rooms feature a lot of wood and stone, with modern beds, a television (we could only find local channels) and a modern bathroom. Best are the chairs outside on the verandahs, perfect for an evening sit-and-chat, or a browse with a laptop tuned into the hotel’s free wifi.

What is there to do?

Shuhe has one of three preserved (and no doubt expanded) ‘old town’ precincts in and near Lijiang. Once an important town on the ancient Tea Horse road which wound through Yunnan to Tibet and beyond, Lijiang has retained a patina of the past. Cobblestone streets, rows of shops, bars, restaurants and winding waterways – interesting for a morning sojourn if you can cope with the hordes of domestic tourists who flock to Lijiang for the history and the favourable climate.

The Bruce Chalet is in Shuhe, one of the three ‘old town’ centres in Lijiang, and a UNESCO World Heritage site, considered a “historic townscape of high quality and authenticity”. The stone Qinglong bridge apparently dates from the Ming dynasty, but it’s unclear how much of the old town is authentic, and how much of it was rebuilt after a devastating earthquake in 1997.

Cars are not permitted to rattle along the cobblestone roads, but there are a few gaily caparisoned ponies trudging about with visitors on their backs. The police get around in a handy golf cart. A number of places to eat are set next to small shops selling souvenirs, and other shops, more importantly, selling the delicious Yunnan ‘Windflower’ beer. The Naxi food (big on barbeque) can be good, but beware duelling sound systems.

At the Bruce Chalet we mentioned that we were hungry for some nearby dinner, and we were taken round the corner to a house where we were simply presented with a range of different delicacies: roast cobs of corn, roast pork, a tomato and eggs dish and fresh plums. No-one could speak any English, but it seemed the friendly family providing the meal was from Anhui.

The Tiger Leaping Gorge is world-famous for its extraordinary scenery. A two-hour drive from Shuhe, the Jinsha river rushes between almost vertical green peaks. Energetic hikers can walk the length of the gorge on a rocky path along the side of the range and even stay in Naxi guesthouses along the way. For the less athletically-minded, there is a flat concrete path along the side of the river. The Bruce Chalet can arrange a car to drive visitors to the spectacular Gorge, or even further afield to Shangri-La, (originally Zhongdian, and renamed by the Chinese government in 2001).