URBAN warfare raged through Bangkok last night as antigovernment protesters skirmished with the military and a protest leader warned of a coming civil war. Streets outside the protesters’ fortified encampments in Bangkok’s commercial heart — designated ‘‘live-fire zones’’ by the military on Saturday — echoed with the rattle of gunfire and small bombs as the Thai government considered imposing a curfew to limit the uprising.

With Thailand’s main emergency medical centre reporting at least 30 dead and more than 230 injured since the fighting erupted on Thursday night, the pressure is now on the Thai government to rapidly end the insurrection. The Bon Kai intersection, near the protest site, was one of the points where crowds of protesters gathered yesterday to join fellow Red Shirt protesters inside the encampment. Ignoring reports of fatal shootings, and ducking as explosions rang out, a couple of protesters braved the gunfire to carry tyres down Rama IV road towards the encampment. 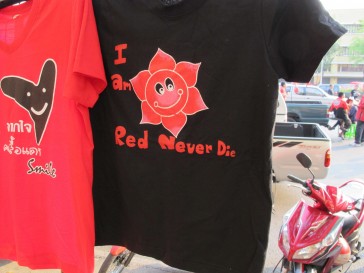 ‘‘Army, army,’’ one protester screamed, pointing towards the gunfire as his friends ducked back under cover. Columns of black smoke from burning tyres reached high into the sky in various positions outside the protest encampment at Ratchaprasong intersection, where thousands of United Front for Democracy Against Dictatorship protesters have been camped since early last month, demanding the dissolution of parliament and fresh elections. The Thai military threw a cordon around the protest site on Thursday evening, hoping to squeeze the protesters out.

Soldiers fired teargas, live ammunition and rubber bullets at the protesters, while they in turn responded with homemade bombs and other weapons. ‘‘It’s likely to become a civil war,’’ protest leader Karkaew Pikulthong told The Australian. ‘‘I don’t want to see it.’’

Sitting behind the stage in the centre of the protest site, he insisted food shortages would not hamper the protesters because a number of shopping centres within the protest site had aisles of food. ‘‘In case of emergency; in case we have to borrow from them, we will,’’ he said. ‘‘We go nowhere. We stay put here.’’

With no rubbish collection services, garbage has been piling up across the protest site, and heavy showers turned part of the site into a quagmire yesterday. Phone services were patchy and protesters feared water supplies would soon begin to run low. Mr Karkaew said he had heard police had shot at soldiers on Friday and Saturday, adding to his worries about civil war. He was appalled, he added, by news that civilians shot dead by unnamed snipers at Din Daeng, about 2km from the protest site, were left in the street for more than 24 hours because the military refused to permit the bodies to be retrieved.

Inside the encampment, a retired police officer, Natisayan Reungsak, said he went backwards and forwards from his home in Lop Buri, about 150km northeast of Bangkok, to the protest with several like-minded friends, and often brought his wife. ‘‘I’m not scared,’’ he said, pointing to his sleeping position, about 200m from the barricades at the southern end of the protest site. ‘‘I just don’t want Abhisit,’’ he added, referring to Thai Prime Minister Abhisit Vejjajiva.

Protest leaders asked the government for a ceasefire, but Mr Abhisit refused in a national television address broadcast yesterday. ‘‘I insist that what we are doing is necessary,’’ he said. ‘‘The government must move forward. We cannot retreat because we are doing things that will benefit the entire country.’’ Mr Karkaew said the number of protesters remained steady at about 5000, even though impartial observers thought the crowds had thinned since fighting began.

He denied Red Shirt leaders had resigned, as had earlier been confirmed by others in the leadership, but he conceded former chairman Veera Musikaphong was working ‘‘on the outside’’. Mr Karkaew said he and other leaders wanted to call a halt to the protest. ‘‘Some of us have different ideas: we think we should stop,’’ he said. ‘‘But. I can’t leave my people, even if we think differently. I have to stand up to fight side by side with the Red Shirts.’’ Kanokporn A, 43, a construction administrator who lives in Bangkok, said she had left her husband and her 13-year-old son at home be with the Red Shirts. ‘‘I’m scared,’’ she said, declining to give her full last name. ‘‘But we must help each other, because if we don’t, it will still be like this in 100 years. The rich people, they are full; the poor people, they are still hungry. I must help the hungry people.’’

Mr Karkaew said he wanted to negotiate to limit the killings. ‘‘I invite the government to come back to the table; killing does not solve any problems,’’ he said. ‘‘It will not solve the protest. I’m very exhausted and very upset. I never thought it would be like this.’’