After nearly ten tumultuous weeks of protest, Thailand’s anti-government activists have been thoroughly routed, their sprawling encampment in Bangkok’s retail heart seized, their tents and stages dismantled, and their strident demands officially set aside.
Known as the red-shirts, they wanted the government led by prime minister Abhisit Vejjajiva out. They wanted early elections, and the early return of a red-aligned government, and they were prepared to sleep on hot tarmac inside their bizarre bamboo fortifications for as long as it took. But on Wednesday the fortifications were crushed by armoured personnel carriers, the red-shirt leaders were arrested and jailed, and the rank and file who had sacrificed so much were finally and ignominiously sent home on buses. 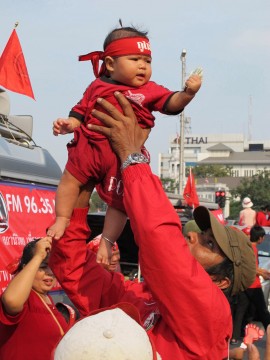 It is unlikely, though, that this massive reversal means the red-shirts have become a spent political force. The ping pong of Thailand’s politics could well continue, the political ball bouncing between the red-shirts and red-aligned governments, and the opposition so-called yellow shirts of the People’s Alliance for Democracy movement. The yellow-shirts forced a red-aligned government out of office in 2008. This month, the red-shirts came close to forcing a political showdown they would win, when Abhisit was pushed into offering an election by the end of this year. Only red-shirt leaders’ bickering and delay allowed him to rescind the offer.

When they occupied Bangkok’s airport for nearly a week in late 2008, the yellow-shirts effectively pushed the red-aligned government of Somchai Wongswat out of office. A number of red-aligned members of parliament defected to support the opposition Democrat party, paving the way for the ascent of Abhisit and the long-simmering rage of red-shirts determined to wrest power back for their own side. The yellow-shirts had earlier occupied Government House for months on end, but yellow-shirt prosecutions never seen the light of day. The red-shirts contend the yellow-shirt PAD movement and Abhisit’s Democrat party are puppets of Bangkok’s monied elites, determined to preserve the status quo of an almost feudally divided society of a few clans of the extremely rich riding on a massive rump of the working classes.

A Thai economist has pointed out that the richest 20 per cent of Thais own 69 per cent of the nation’s assets, while the poorest 20 per cent own one per cent. In a presentation late last year, Pasuk Phongpaichit said this gap was only worse in African states rent by civil wars and some Latin American nations known for their inequality. It is worse than the disparity found in other Asian nations, and rather than Thailand moving towards more equality, the gap appears to be widening over time.

“Thailand should be a much fairer society than it is today,” Dr Pasuk said in her workshop presentation. “I’m not suggesting that recent conflict is all about poor versus rich. It’s more complex than that. But if there are a lot of people who feel exploited, marginalised, disadvantaged; and a lot of other much more privileged people who fear the resentment of the exploited and marginalised, then there is little chance of a society with trust, cooperation, and peace.”

And the red-shirts do feel exploited and marginalised. In their weeks occupied the ritzy shopping district centred on Bangkok’s Ratchaprasong intersection, they spoke of their woes and their hopes for the future. They wanted a comprehensive education for their children, they wanted subsidised health care and village-level micro-finance, and most of all they wanted some kind of understanding that their aspirations were not futile. The working classes of Thailand’s north and north-east are the prime supporters of the red-shirt movement. Camped at Ratchaprasong, in front of gleaming Louis Vuitton shop windows, and the marble and chrome of five-star hotels, they knew these riches would never be theirs. But they wanted some share of Thailand’s wealth.

Dr Thitinan Pongsudhirak, a leading political analyst and the director of Thailand’s Institute of Security and International Studies, points out that the red-shirts briefly rioted in Bangkok in April last year, a short-lived uprising which nevertheless brought Thai troops out on to the streets. “This time it has been much more intense, much more violent, much more costly,” he says. “But the tone has not really changed from last year.” Last year’s unrest won handouts and giveaways, but no real change, even though Abhisit had said he would address red-shirt grievances.

Dr Thitinan says Abhisit talked about social justice last year, about the need for constitutional amendments, and the need for Thailand to heal. Yet little was achieved in real terms, and the nation became increasingly polarised. The red-shirts and their like-minded fellow Thais have not won recognition by protesting or rioting. What they do they need to do to make progress? “We could very well see the emergence of an armed insurgency of a different kind,” Dr Thitinan says. “The manifestation of that could be sabotage, mysterious shootings, mysterious bombings. We are headed in that direction at the end of the day if their grievances are not addressed.”

Although they were ultimately defeated, before the end the red-shirt leaders had won a significant concession from Abhisit. He came up with a five-point peace plan which essentially offered a national election in November this year, more than a year ahead of schedule, and an independent investigation into the April 10 military crackdown on the protesters which left 25 people dead – mostly red-shirts. The protest leaders were divided. Some wanted to accept the offer; hardliners wanted more. Eventually the leaders declared they wanted the arrest and prosecution of deputy prime minister Suthep Thaugsuban for his role in the April crackdown.

It was a bridge too far, and after a few days of delay Abhisit rescinded the offer of an early election, the military threw a cordon around the protest site to choke off supplies and the arrival of supporters, and within a week troops pushed down the barricades and advanced, firing live rounds, and forcing the red-shirts to surrender with far fewer lives lost than the doom-sayers had predicted. At least 75 people – mostly protesters – have been killed and nearly 1,800 wounded since the red-shirt protesters from the United Front for Democracy Against Dictatorship movement first descended on Bangkok in mid-March. And for what?

Dr Thitinan says that to begin with at least, the red-shirts were far more organised and disciplined than they were last year, and their plans to politically educate the populace had borne fruit. He expects them to return with new plans to wrest some concessions from the government, although he believes the impetus for big protests has withered. “I don’t think the reds will be appeased, they will come back for more,” he says, concerned they would further divide themselves from other Thais, by listening to their own media, creating their own networks, refining their own views of the world.

Their rage is underpinned by the grievance of two ousted governments and a wagon-load of banned red-aligned politicians for ostensibly fraudulent practices. Dr Thitinan believes the government must consider lifting the ban on some or all the red-aligned politicians. With the wholesale arrest of a swag of red-shirt leaders on Wednesday, the movement has been left rudderless. Often seen as the tool of ousted and exiled former prime minister Thaksin Shinawatra, the red movement has grown and matured in recent months, and Dr Thitinan believes it may even manage to eventually bypass Thaksin.

Dr Michael Nelson, a visiting fellow at Chulalongkorn University’s faculty of political science, says there is little chance of the red-shirt leaders leaving jail in the foreseeable future. Many were already out on bail after being charged with last year’s fracas, and the charges this time will be much more severe: terrorism and planning to overthrow the monarchy.

“The key red-shirt leaders who have been arrested have been the leaders since 2007,” he says. “These people have all been around for many years, they were the key people who kept the movement running.” Favouring the notion of forcing political change with large protests, some of the leaders even managed to wring political recognition from Abhisit when he agreed to debate them in a nationally televised forum while the protest was underway, and the red-shirt followers were making merry in their fortified encampment. The elimination of the protest leaders from the debate could push the emphasis back on to the MPs from the red-shirt aligned Puea Thai party, politicians who played a secondary role as the red-shirt protest wound on.

Nelson says the protest came very close this to achieving red-shirt goals this year, only stymied at the last by short-sighted leaders who insisted on holding out for more. Faced with an internationally embarrassing weeks-long seizure of Bangkok’s wealthiest retail district, which was cheerfully occupied by a raggle-taggle crew of enthusiastic and seemingly immovable red-shirts, combined with the threat of urban guerilla violence, Abhisit caved in, offering an election he would almost certainly lose. His backers were furious; the red-shirts jubilant – for a short time at least. The offer is not likely to be repeated.

“It was a very significant concession,” Nelson says. “Against his will and against the will of his supporters.”