Mining billionaire Andrew Forrest and his wife Nicola were the first Australians to sign up to the “Giving Pledge,” a plan pioneered by Bill and Melinda Gates and Warren Buffett to encourage the very rich to donate more than half their accumulated wealth to worthy causes. Now the Forrests have fulfilled at least part of their commitment, pledging 400 million Australian dollars, the largest charitable donation ever made by a living Australian.

The Forrests are among 169 of the world’s wealthiest individuals, couples and families from 21 countries who have joined the Giving Pledge and undertaken to give away a majority of their assets, during their lifetimes or in their wills. Others include Oracle co-founder Larry Ellison, Facebook CEO Mark Zuckerberg, and the British entrepreneur Richard Branson. 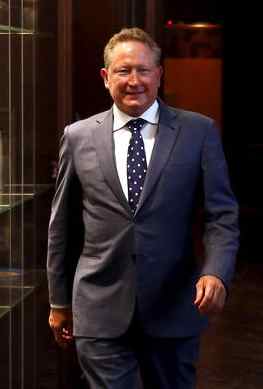 Forrest founded the Australian mining company Fortescue Metals Group, the world’s fourth largest iron ore producer, and is estimated by Forbes magazine to have net worth of more than $4.3 billion, derived largely from iron ore mining. The Forrests also own thousands of square kilometers of pastoral holdings in Western Australia, a meat-processing plant and other interests.

As has been the case with many other munificent donors, Forrest’s generosity has been measured by critics against the hard-headed business practices he employed to build his fortune.

According to The Australian newspaper, in an article published earlier this year, these included tough mining rights negotiations with indigenous landholders who had no legal representation. Forrest refused requests from The Australian to discuss these issues. But he had previously pointed to the difficulties involved in negotiating mining agreements in areas where overlapping native title claims have been lodged by many groups and individuals.

Reuters news agency also reported in May that Forrest has used indigenous native title laws, drawn up to protect Aboriginal interests, to prevent rival prospectors getting access to his land holdings. This is one of the first known examples of a non-Aboriginal person using these rights. It is not illegal, and a spokeswoman for Forrest told Reuters that the issue was about complying with mining regulations.

Despite misgivings in certain quarters about some of Forrest’s business strategies, the Forrests’ A$400 million pledge was roundly applauded by Australian Prime Minister Malcolm Turnbull, who said the gift was, “a game-changer in the Australian philanthropic community,” adding that it would change the lives of thousands of people in Australia and around the world.

Turnbull presided over the announcement of the pledge at a star-studded event in Canberra in May, where he was joined by Australian actors Russell Crowe and Jack Thompson, Bill Shorten, the leader of the opposition Labor party, and the former Australian Prime Minister Tony Abbott. Turnbull said the money would fund a range of different initiatives, including cancer research, ending slavery around the world, addressing indigenous disadvantages and boosting achievement in education.

Forrest, widely known as “Twiggy,” and considered to be one of Australia’s richest citizens, said he hoped to encourage Australians to give what they could, while “recognizing it’s a very personal choice — like I have been encouraged by the Gates and the Buffetts and others of the world.”

The Forrests have two daughters and a son — Grace, 23, Sophia, 22, and Sydney, 17 — and Andrew Forrest has repeatedly declared that he does not want his children to be spoiled by the burdens of enormous inherited wealth.

On the Forrests’ Minderoo Foundation website, (a charitable organization established in 2001, originally known as the Australian Children’s Trust), there is an open letter to Bill Gates and Buffett from the couple about their commitment to the Giving Pledge, which they joined in 2013.

“As a family, we agreed many years ago to give away the majority of our wealth,” the letter says. “We felt that if our children were to inherit considerable wealth, it would only get in the way of them striving for and achieving their best, and truly making a positive difference in other people’s lives.”

Andrew Burrell, a senior journalist with The Australian newspaper, and the author of an unauthorized biography of Forrest called “Twiggy: The High Stakes Life of Andrew Forrest,” told the Nikkei Asian Review that he thought the billionaire’s philanthropy was sincere.

“He believes he’s doing the right thing, but he’s also greatly influenced by his wife, Nicola, who has largely kept him on the straight and narrow since they met,” he said. “She’s a big influence; she’s driven a lot of the philanthropy. But you can’t say that he’s not enthusiastic about it.”

Burrell said the A$400 million pledge included elements of charitable funding that had already been announced and donated. “Some of it’s very laudable, and it’s very hard to criticize someone for being charitable, but I think it was designed so Twiggy could look the hero in front of the prime minister and the rest of the country,” he said. “When you look at it more closely, a lot of it’s quite vague; a lot of it is stuff he was already doing anyway, through the Minderoo Foundation.”

Burrell said that in the past, Forrest had donated shares in Fortescue Metals to charitable causes, rather than the more typical donations of money. This led to the unlikely scenario of arts and charity executives, with Fortescue shares on their books, watching the share-market and the oscillating fortunes of the company with keen interest.

At the announcement of the A$400 million pledge, Andrew Forrest remembered the couple’s history of charitable donations. “I have been very fortunate, with my wife Nicola, to be able to accumulate capital, and then, as soon as we can, to commence giving it away,” he said. “We had a slightly unsustainable business model previously, where we would actually borrow money to give it away. Fortunately, we don’t have to do that now, thanks to the strength of the iron ore sector.”

Although Andrew Forrest has stepped down as Fortescue’s CEO to pursue his philanthropical interests, he and his wife own 33% of the company. The share price performed strongly last year, recovering from a low of A$1.54 in January 2016 to A$6.88 on February 17.

The improvement tracked a doubling in iron ore prices, which rose from $42.20 per dry ton in January 2016 to $87.20 in March 2017, according to the financial statistics provider Index Mundi. However, Fortescue’s share price had fallen to A$5.21 by June 29, reflecting renewed weakness in iron ore, which fell to $61.63 in May. The commodity’s recent fluctuations compare with a high of $187.18 in February 2011.

In spite of these market gyrations, Burrell estimates that Andrew Forrest has received about A$300 million in dividends in the last six months.

Burrell said Forrest had always been a man of action. “This latest donation, if you look at it, he wants to basically cure cancer,” he said. “Forrest has always had these big, bold aspirations, these massive targets. He’s going to fix world slavery, he’s going to end Aboriginal [quality of life] disparity, he’s going to cure cancer. These are extraordinary targets and ambitions.

“He will work 24 hours a day to achieve whatever is on his mind, whether that’s starting up a nickel mine or an iron ore mine, or trying to stop slavery; he won’t sleep, he will go hammer and tongs to achieve it. You could say he’s obsessively driven.”

Photo: Andrew Forrest, Australian Prime Minister Malcolm Turnbull and Australian actor Russell Crowe at the announcement of the A$400 million pledge in Canberra.