It’s not so cut and dried

Ever-creeping climate change is spelling the end of the lawn as we know it. Environmentalists everywhere see the neat and weed-free grass lawn as an ecological disaster in an age of ever-increasing heat, shrinking water resources and increasingly scarce wild habitat.

Gavin Coates, a senior lecturer in landscape architecture at the University of Hong Kong, says lawns are “massively inefficient” in many of the world’s geographical regions.

But not in Hong Kong. The city’s relatively few grassy areas, in parks, nature reserves and on sports fields, are mostly well used and much enjoyed – a social benefit that offsets their environmental cost. Hongkongers walk, sit, play, relax, socialise and practise yoga on lawns in parks, and play and watch sports on sports fields. 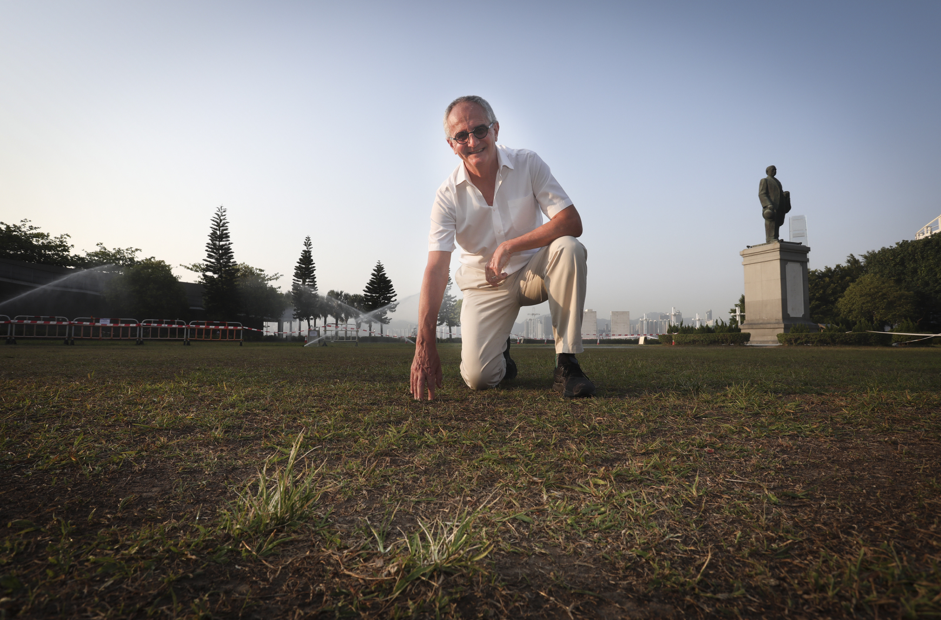 Gavin Coates, senior lecturer in landscape architecture at the University of Hong Kong.

“These grassy areas are hugely inefficient in terms of maintenance,” he says, referring to the immensely popular Sun Yat Sen Park in Sai Ying Pun as an example of expense and benefit. “They have to water it and fence bits off; there’s endless input to keep those grass areas looking reasonable and usable.”

Yet hordes of people enjoy sitting and walking on the park’s grassy areas every day, so the cost in water and maintenance is worth it, he adds.

Almost by accident, Coates says, Hong Kong has become a world leader in restricting grass to socially useful functions. Environmentally expensive grassy areas are limited to places that will benefit the public most through their use.

“Those areas of grass have a very important function – even though they’re wasteful in terms of resources, it’s not really a waste because you get a social benefit,” he says. In Hong Kong, he says, there simply isn’t the room or the terrain for expanses of purely decorative lawn, however refreshing they are to the eye.

Stretches of grass look fresh and green but a well-kept lawn is a thirsty luxury, needing intense irrigation and regular mowing that consumes energy and can emit pollution. Shorn grass has no blossoms for bees, no seed for birds and provides little habitat for wildlife. Common pesticides used to keep the grass pest-free are necessarily toxic.

In many cities around the world, particularly in drier regions, authorities are tackling the environmental cost of lawns by trying to limit public grasslands and steer residents towards lawn substitutes such as succulents, cactuses or gravel for their own gardens.

In Las Vegas, the gambling hub in the Mojave desert in the US state of Nevada, water officials have spent two decades trying to get people to replace thirsty greenery with desert plants. Yet the Southern Nevada Water Authority estimates there are almost 21 square kilometres (eight square miles) of “non-functional turf” in the city – grass that no one ever walks on or uses, growing in road dividers, housing estates and office parks.

Now officials are asking the Nevada legislature to outlaw roughly 40 per cent of this turf via what is thought to be a world-first ban on certain uses of grass.

Officials say this ornamental grass requires four times as much water as drought-tolerant landscaping like cactus and other succulents. By ripping it out, they estimate the region can reduce annual water consumption by roughly 15 per cent and save about 53 litres per person per day.

No other major US city has tried to phase out the use of certain categories of grass permanently, and the move has been seen as a harbinger of more extreme measures that will soon be needed around the world to adapt urban areas to climate change.

For his part, Coates says grassy lawns are an anomaly in many parts of the world, especially in deserts like the Mojave, and in the tropics where jungles were once prevalent. “It’s not the natural climate’s vegetation, therefore it needs a lot of intervention to keep it looking even reasonable,” he says.

“Even in England, the big areas of grass like Richmond Park or Hyde Park, that’s all totally artificial,” he says. “It doesn’t use much in irrigation because of the regular rainfall in Britain, but uses a vast amount of energy in cutting the grass.”
In Hong Kong, in contrast to Britain, there is a massive shortage of fresh water. Without major rivers, lakes or underground water sources, Hong Kong has been importing water from the Dongjaing, or East River, in Guangdong, the Chinese province that borders the city, since 1965; these days as much as 80 per cent of Hong Kong’s fresh water is imported from there. Yet some of that water is used by Hong Kong’s Leisure and Cultural Services Department to irrigate public parks and gardens, according to a departmental spokesman.
The department manages about 1,600 parks and gardens of various sizes, including 26 major parks; between them these spaces have more than 50 multipurpose large lawns, ranging in size from 300 square metres to 20,000 square metres.

Meanwhile, household lawns in drier cities in Australia, Canada and the US, in particular are less and less popular with suburban residents, as recurrent water restrictions and garden watering bans leave them dry, brown and crusty.

“No-Mow” proponents have pushed for alternatives to the shorn green squares and rectangles of so many backyards, yet wild and shaggy meadows filled with wildflowers have incurred censure from tidy-minded neighbours and urban authorities.

Still, the British charity Plantlife is campaigning for a No-Mow May (potentially followed by a Let it Bloom June and Knee High July).

The much-loved BBC celebrity gardener Monty Don referred to Britain’s national obsession with shorn lawns in a recent interview with the Radio Times magazine, saying mowing “burns lots of fossil fuel, makes a filthy noise, and is about the most injurious thing you can do to wildlife”.

“Letting grass grow, which is, after all, a pretty passive thing to do, is probably the single most effective thing you can do in any garden of any size to encourage particularly insect life, but also small mammals, invertebrates, reptiles,” he went on.

Across the Atlantic, limits on lawns are driven more by water shortages than anything else. California imposed a temporary ban on watering ornamental grass during last decade’s drought, and state authorities offered rebates to subsidise the replacement of lawns with gravel and succulents.

Other dry cities around the world have tried different ways with grass to reduce water usage. In Perth and other parts of Western Australia, lawn sprinkler systems are restricted to a couple of days a week and in Sydney, Australia, at various times down the years a hosepipe ban restricted garden watering.

The Las Vegas region had a record 240 days without measurable rainfall during 2020, among the driest years in the city’s history, so it has been easier to make the case against having ornamental grass.

Other desert cities in the US have yet to embrace grass replacement policies. Salt Lake City in Utah has an ordinance that actually requires a certain amount of yard and median greenery. Phoenix, in Arizona, where some neighbourhoods are lush from flood irrigation, has never offered grass removal rebates.

A draconian anti-grass policy might not work in downtown Phoenix, says Cynthia Campbell, water resources adviser for the city, the fifth-largest in the US. Trees and grass are needed to blunt the public health dangers of “urban heat islands” – those areas lacking green landscaping to offset heat through evaporative cooling.

With additional reporting by AP