Hopes soar for an end to life in exile

Musaab Naji Al-Wakil is an ordinary, middle-class Iraqi who has been stuck in Malaysia with his wife and four children for five years, and he too has felt the pull of the boats.

His kids are getting older, less tractable, and they should soon be planning for college or university – an impossibility in Malaysia. Musaab, now 40, worries about the future but doors keep slamming in his face. His passport has expired and late last year he received a letter from Australia’s Department of Immigration and Citizenship turning him down for a Refugee and Humanitarian visa of a particular class. It seems a letter of sponsorship written by a fellow Iraqi in Australia wasn’t enough to wedge the door open. Musaab says his family has even secretly converted to Christianity, in the wild hope that it might further their cause.

Now, though, the tectonic plates have shifted. The Australian government has accepted all the Houston report’s recommendations and within five years Australia will resettle nearly twice as many refugees as it does now; upping the humanitarian intake to 27,000 people a year. And asylum-seekers and recognised refugees who arrive by boat will be shipped off to Nauru or Manus Island in Papua New Guinea to wait their turn. Arriving by boat will give no advantage to asylum-seekers over those stuck in African camps, or living in limbo in Asian cities.

“This is good news,” Musaab says. “I needed to hear something, a change, because my future is closed. I hope to see my family settled.” He had been fighting the lure of the boats, speaking out against them, yet life in exile had begun to wear him down. Resisting the boats was getting harder. “This one is not easy,” he says. “But I think when you do like this (legally), it’s better and safer.” 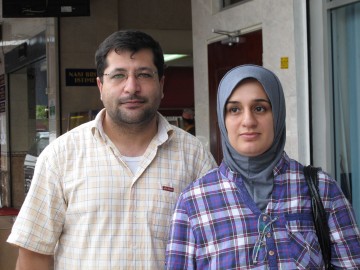 Musaab’s wife, Shaimaa, says the boats had been a constant temptation, and the lucky ones who finally made it to Australia peppered those left behind with messages about how easy it all was. “My husband has a friend,” she says. “He’s gone. He was sending emails, saying ‘it’s very good, it’s very easy, you can do it’. When my husband called his friend in Australia, his friend said ‘why are you still in Malaysia, you are crazy’.”

Shaimaa works as a volunteer maths and science teacher in a refugee community school and she wants her kids to be properly educated. She looks like a teacher – serious and careful, and she still wears a headscarf, despite her conversion to Christianity. In Malaysia overt apostasy can be dangerous. Her eldest daughter, Umaima, is 17, and her eldest son, Mustafa, is 16.

“Now my son, he’s big,” she says, shaking her head. “I cannot control him.” Mustafa does a little part-time work repairing things, she says, and last week he bought himself a new Galaxy phone. He is friends with Iranian and Afghan teenagers in Kuala Lumpur and Shaimaa has long feared that one day he would just get on a boat and go. Alone. To another country.  Hearing this, Musaab begins to get quietly annoyed, and Shaimaa explains he hadn’t heard that his 16-year-old son was starting to rebel. “My problem is my son,” Musaab says, dolefully. “I am 40. I am old.”

A large, friendly bear of a man, Musaab shakes his head sadly. He has been frustrated for a long time; hoping for something, anything, to jumpstart a move to a better place. “We cannot apply, we cannot do any more,” he says. “I don’t know what I can do in the future. I don’t know. For a long time my file is ready to be sent to any embassy.” UNHCR officials, he adds, can tell them nothing about their prospects.

These Iraqis are reasonably well-educated, middle-class, ordinary. In Baghdad, before the war, Musaab worked as a generator engineer. In Australia they might live in Epping or Moorabbin or Springwood, drive a late-model Japanese sedan and worry about their superannuation and their children’s strange taste in clothes and music.

But their ordinary middle-class lives were turned upside-down by the war in Iraq, and since then they have been scrabbling to get back to the comfort of the unexciting and normal.

Many of their fellow-Iraqis huddling in Malaysia and Indonesia sized up the risks, worked out the odds and bought a passage on a boat illicitly making its way to the Australian territory of Christmas island. They decided to seek refugee status in Australia – a legal and tactical move. And many have been recognised as legitimate refugees. Now, with Australia’s changed rules, that water route will be much more onerous and it’s likely that most will choose to stay where they are, rather than risk their lives only to end up in a tent in some other alien place. And, once they get to Manus or Nauru, find they have to wait for as long as five years to be processed, and – perhaps most upsetting – find they can’t fast-forward applications for asylum for their relatives.

Musaab and Shaimaa are adamant that returning to Iraq is not an option for them. “It’s not easy,” Musaab says of the new Iraq. “Outside now it’s better than before. But still my house, another family is in it.”

They didn’t flee Iraq just because of the war, Shaimaa says, although most people would see the mad carnage of the terrorist bombs as reason enough. “The mujahid told my husband to leave the house; leave everything and go out. My husband says ‘this is my house, I won’t leave my house’. So they kidnapped our son, Mustafa.”

Musaab and Shaimaa got the boy back and fled the country in 2007. They went to Syria, but only stayed six months. “We could not get any visa; no country gives Iraqis visas. So we arrived in Kuala Lumpur as tourists and after one day we went to the UN.”

Shaimaa says her mother is still living in Baghdad, but she is too frightened to go to check on Shaimaa’s house. “She cannot go to see our house. She’s scared they will kill her.” Musaab says a return to Iraq would be a return to fear. If it were a choice between Malaysia and Iraq, the family would stay in Malaysia. “When I go to a job here, it’s okay,” he says. “There, maybe I go to work, come back, and maybe my family’s not there any more.” He works as a driver in Kuala Lumpur, where the biggest problem is the lack of income, the constant bribes he has to pay police to turn a blind eye to the fact that he has no licence, and the possibility he will be locked up as an illegal immigrant.

The day after Musaab and Shaimaa explained that Iraq was really not very safe and some parts were far more dangerous than others, a devastating wave of fatal attacks spread across war-torn nation, killing dozens of people. 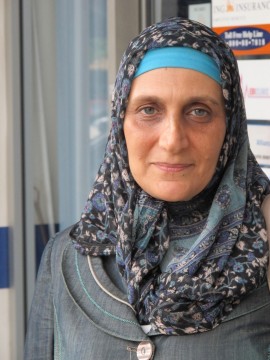 A fellow Iraqi, Nagham Baha Ar-Rawi, has had an even tougher time in Malaysia. She and her husband fled Iraq in 2005, but three years ago he abandoned her and her two children, and she has heard nothing from him since. “We were waiting desperately,” she says, shrugging. “The savings had dried out. He had pneumonia. Things got very bad between us and suddenly he left, even without taking his clothes.”

When Nagham arrived in Malaysia, her son was six. Now he’s 14, taller than her, and starting to think like an adult. Her daughter is 13. Some time after her husband left, Nagham was told she had won approval to settle in the US. She was dismayed: she had never asked to go the US; she was afraid of hate crimes in the US. Both her children bear her husband’s name ‘Osama’. She feared her son, Taher Osama Taher, and her daughter, Lujain Osama Taher, would be targeted.

“I was afraid to go there because of the name,” she says. “I was really scared about the hating crime.” And changing her kids’ names would be difficult, it might even be impossible, and it would be the wrong thing to do, she says. The decision has cost her. She explains she has since been told by an official that she had slammed the door on resettlement. “She (the official) said ‘no country will accept your file’,” Nagham remembers.

Living in Kuala Lumpur with her mother, her sister (who has epilepsy) and her two children, Nagham occasionally works as a translator for Arabs visiting Malaysia. She begins by saying she is opposed to paying for an illicit boat passage to Australia.  But before the news from Australia she had been wavering, eventually saying that if there had been no change to her life and the lives of her relatives in a year she would take drastic action, and maybe get on a boat by herself, “to save the others”.

Now she is delighted she didn’t give in to the lure of the boats; the boats which have killed so many and transported so many others – eventually – to the land of their dreams.

“Really, you cannot feel, but my heart is beating very fast now,” she says, on first learning of the rule changes. “I hope that my file is sent to Australia.” She pauses, and draws a breath. “Sometimes I feel that I’m desperate, that I’m pushing the bottom, but then there is something and I see the light again.”

Ali Kamil is younger than the others. Born in 1983, he is a pastry chef, and he arrived in Kuala Lumpur in 2009. He tried to sell his house in Baghdad but the Shia paramilitary force known as the Mahdi army had taken it and threatened to kill him. Now he is living in Kuala Lumpur where he has connected with an Indonesian woman.

He is fairly sure his file is in the UNHCR office’s resettlement department, but he doesn’t know for sure because, he says, they don’t tell him anything.  Meanwhile he works 12-hour days in a commercial kitchen making desserts for downtown Kuala Lumpur restaurants. He is a heavy man, and on his feet all the time. Huge knotted varicose veins crawl up his legs, so he has taken medical advice, and an operation has been scheduled for October.

He is adamant he never wanted to take a boat to Australia. “No, no, I cannot do that,” he says. “I want the UN to take me. So many of my friends have done this. This is the wrong way, how can I go this way? This is very dangerous. So many people have died; I saw it on the TV.”