Over the centuries, Hong Kong’s lush subtropical woodlands have been burned, accidentally and deliberately – cut down for fuel, slashed to make way for agriculture, flattened by typhoons, replanted to stabilise hillsides, cut down to make way for development, devastated by insect plagues and replanted again. Whatever happens, they keep coming back.

Now the tracts of green trees that blanket mountains and valleys are spreading naturally, making Hong Kong one of the few largely urban places in the world where forests are taking back territory. And every weekend, Hongkongers take off into the countryside, walking among the trees, hiking, birding, photographing, picnicking, relaxing, and enjoying the green world.

“Yes, the forest is creeping back,” says Zhang Jinlong, a senior plant ecologist at the Kadoorie Farm and Botanic Garden in Tai Po, in the New Territories. “It’s quite amazing actually.” But species diversity is not necessarily coming back at the same time, he adds. “Although it looks very green, the diversity could be very low. 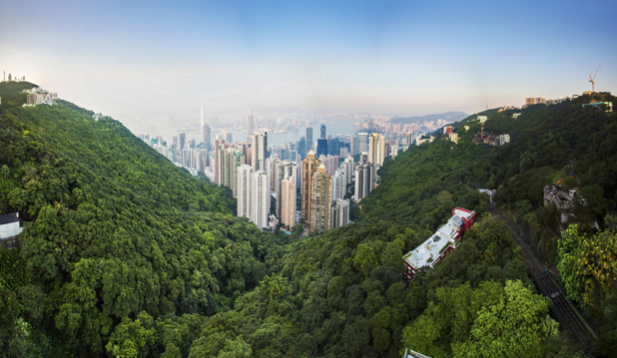 This forest regrowth lacks the range of plant species of different sizes needed to nurture a wide variety of native animals and insects. Often extremely dense, dark and scrubby, much of Hong Kong’s forest – which is almost entirely secondary forest – lacks the different layers found in untouched primary woodland.

Generally more open, old-growth forest has a variety of levels, from tall trees, to smaller trees, to shrubs and saplings, to mosses and grasses. Hong Kong’s chequered environmental history means there is almost no remnant old-growth forest left. A few tiny patches of feng shui woodland (sacred or lucky groves), once commonly found behind villages, remain largely intact, but much of the rest of the territory’s now slowly expanding woodlands are secondary-growth forests, dense and largely impenetrable, flourishing on once burned or cleared land.

Standing in the dappled shade of the Nam Fung Road feng shui woodland, near Deep Water Bay on Hong Kong Island, it’s easy to see the difference between primary and secondary forest. This small patch of forest closely resembles the primary forest that covered Hong Kong many centuries ago. It has a different character to the completely regrown forest. Individual trees tower in places, and smaller shrubs clump elsewhere. With patches of more open ground, and openings through glades of trees, it seems far less constricted than regrowth forest, and home to a wider variety of different species

To determine how best to foster more diverse forests, the Kadoorie Farm has been running a small-scale experiment for about three years, thinning trees on a hillside within the Botanic Garden to create artificial gaps in the tree canopy.

The Kadoorie Farm is also collecting seeds from various country parks in Hong Kong, growing seedlings and planting them in the understorey of this experimental patch of forest in an effort to further understand the different factors affecting overall plant diversity.

Zhang fears, though, that if the genetic pool is too small, Hong Kong’s woodland will never fully evolve into anything resembling old-growth forest. Trees native to Hong Kong include mostly the evergreen, broadleaf types found in subtropical forests across Southeast Asia, such as oaks, figs, myrtles, and trees from the tea family

“Over 60 per cent of the woodland species in Hong Kong are endangered. This means that probably there is something wrong with the [tree] population,” Zhang says.

To stabilise hills and create watersheds for reservoirs, British colonists in Hong Kong planted trees, including imported timber species, such as tough Australian eucalyptuses, better known as gum trees; melaleucas – paperbarks, tea-trees, honey myrtles; and evergreen box trees. Stands of these imports can still be seen in Hong Kong, Zhang adds, and they can grow to heights of 25 to 30 metres. “They grow very well, but they are not very friendly to the local wildlife here.” 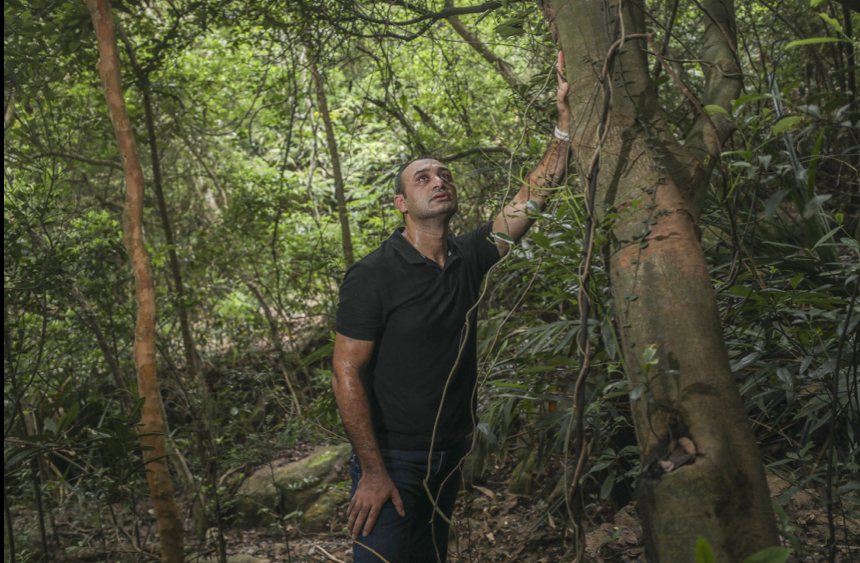 Research by ecologist Sawaid Abbas, from the Department of Land Surveying and Geo-informatics at the Hong Kong Polytechnic University, has documented the profound expansion in natural forests in the area since the second world war.

He and his colleagues used aerial photographs from 1945, 1963 and 1989 and high-resolution satellite images from 2001 and 2014 of two country parks, Shing Mun and adjacent Tai Mo Shan (abutting the Kadoorie Farm and Botanic Garden) in the New Territories.

“Most of the old-growth patches are in the deep ravines and there is no mechanism of seed dispersion from the valley bottom, especially in the absence of seed dispersal agents,” Abbas says, confirming that species diversity is failing to increase in the naturally regenerating forests.

The dominance of fewer species in Hong Kong’s forests is potentially devastating, he adds, because these limited woodlands are more vulnerable to extreme weather, such as typhoons or frosts, and mass insect infestation, such as the 1980s pine wilt nematode outbreak that killed much of Hong Kong’s native pine plantations.

No one knows whether Hong Kong’s secondary-growth woodlands will eventually evolve and become the species-rich and diverse forests that once nurtured so many animal species, both vertebrate and invertebrate – including, almost unbelievably, tigers and elephants

Gavin Coates, a lecturer in landscape architecture at the University of Hong Kong, says the changing carpet of trees around Tai Lam reservoir, in the hills between Tsuen Wan and Tuen Mun in the New Territories, could provide an insight into the evolution of secondary forests.

“It’s now all forest, approaching the state of natural woodland, and in the process it’s becoming less scrubby,” he says.

Nearly 40 per cent of Hong Kong’s territory has been designated as country park and other protected natural areas, although there have been recent and ominous rumblings about the possibility of building housing on the periphery of the much-loved parks. 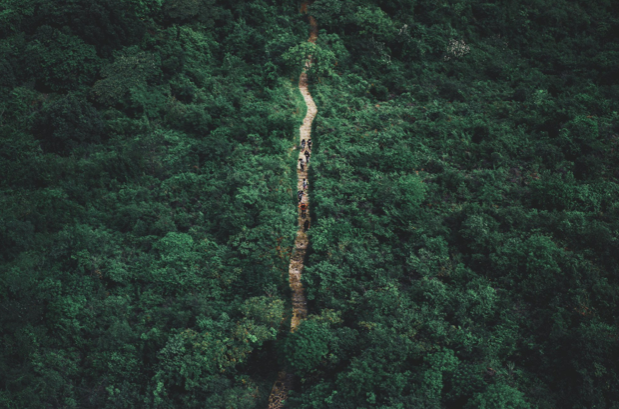 The second-growth green forests that comprise the vast majority of Hong Kong woodland, most experts agree, need comprehensive and robust protection so they can reach their full scope and potentially develop into something resembling untouched primary forest, as well as providing healthy watersheds for reservoirs and stability for hillsides and absorbing carbon dioxide.

Cleared from the 11th and 12th centuries onwards, Hong Kong’s forests have been used and abused for centuries. Forests were cut down in massive swathes to provide fuel for lime-making and later cleared to open up land for agriculture including rice paddies and tea plantations.

By the time the British occupied Hong Kong in the 1840s, there was almost no primary forest left – early photographs of bare hills might explain why it was described as a “barren rock” by the British foreign secretary at the time, Lord Palmerston.

In the decades leading up to the second world war, agriculture spread widely in Hong Kong, and timber clearing accelerated to provide fuel and material for building. The war years saw further forest destruction.

Apart from the feng shui groves, there was almost no forest left standing in Hong Kong by the end of the war, the report found.From the 1950s to the 1970s, Hong Kong saw a surge of migration and shanty towns spread over the territory, and with them increasing vegetation clearance and accelerating numbers of forest fires.

Hill fires due to the overenthusiastic “grave-sweeping” of traditional hillside graves during the Ching Ming and Cheung Yeung festivals have slowly been reduced with education, Coates says, and deforestation due to agriculture and squatter settlements came to an end by the 1970s

Reforestation efforts in the 1960s and 1970s set the scene for the modern, forested Hong Kong of today. Hong Kong’s forests, Coates adds, are now expanding to such an extent that some ecologists are even concerned woodland is taking over Hong Kong’s upland grasslands.

A natural forest, he says, takes time to grow and develop. “It starts with small shrubs, grasses and mosses. As these grow and increasingly add humus to the forest floor, tree seedlings invade and begin to take over in a process, called ‘succession’. As the forest grows, more dispersal agents – bats, birds, and insects – arrive, and seeds are spread. Gradually the forest expands and grows taller.