Before it goes to waste

Those loaves of bread won’t be fresh enough for customers tomorrow, so tonight they will be collected by a charity for distribution to the hungry. The containers of cooked soup won’t be ordered by restaurant customers for a set lunch today, so tonight they will go to a discount food rescue app for a flash sale. The cupcakes and luxury desserts left over an elite bakery will be marked down by half to get them moving to food rescue customers rather than be consigned to the garbage bin.

From a small base, food rescue is accelerating in Hong Kong, encouraged by the government, appreciated by the needy and enthusiastically adopted by the price-conscious.

A new anti-food waste app, Phenix, was launched in Hong Kong in February, in partnership with the members-only designer fashion flash sale firm On The List.

Already popular in France, Belgium, Italy, Portugal and Spain, Phenix in Hong Kong has so far signed up about 20 providers, including restaurants such as Oolaa and Cali-Mex, shops such as Cakery, the Rise bakeries and most recently, the CitySuper supermarket chain.

Phenix app users can specify the types of food they want to buy from shops and supermarkets, such as fruit and vegetables or dried goods, and nominate whether or not they are vegetarian, and whether they require halal or organic food. Offers from shops and restaurants of the types of food available appear on the app, along with prices, time windows for collection, and the geographic locations of the provider along with how far they are from the customer.

Co-founder of OnTheList Delphine Dultzin says many dozens of Phenix’s boxes of food have already been purchased by eager customers, and she expects the app to grow fast. OnTheList members, she adds, have been intrigued by the Phenix concept.

“Phenix in France has as many as 8000 partners,” she says. “Here, it’s just beginning. We have the customers, they are very interested.”

Food rescue programs like Phenix will go some way toward minimising the massive waste of food in Hong Kong. Millions of cooked meals, boxes of fruit and vegetables, crates of meat and  seafood, loaves of bread and baked goods are wasted in Hong Kong every year, never quite making it into people’s bellies.

Wet markets and other types of market in Hong Kong have their own ways to minimise food waste, by discounting foods that are soon to move past their use-by dates, and donating leftovers to locally based charities. Yet according to the environmental protection department (EPD), an average of nearly 3,500 tonnes of food was wasted every day in Hong Kong in 2019, and it seems unlikely there has been much of a reduction since then.

Nearly all this food waste wound up in landfill, producing greenhouse gases and contributing to climate change.

The Phenix model now in Hong Kong resembles the popular Too Good to Go app which is taking off around the world. Founded in Copenhagen in 2016, and now operating in 15 countries including Europe and the US, Too Good to Go says it has signed up more than 77,000 food providers and more than 33 million people around the world. Using the TGTG app, consumers can pick up massively discounted bags of leftover food, for say US$5, from providers at a specific time, usually at the end of the day.

Governments everywhere are funding worthy food rescue projects in an attempt to chip away at the mountains of ready-to-eat food discarded every day.

More than one-sixth, or 17 per cent, of all food produced around the world ends up being thrown away, according to the 2021 United Nations Food Waste Index report which used data from more than 50 countries. Despite this massive waste of food, the 50-page report notes more than 3 billion people globally can’t afford a healthy diet.

Artificial intelligence is being increasingly used to deal with the problem. Japan produces a massive 6 million tonnes of feed waste every year, according to a Reuters report – the most per capita in Asia. The Japanese government has enacted a new law to halve food waste costs from 2000 levels by 2030, encouraging the private sector to find solutions to the torrent of food heading straight from the shelves to the garbage dump.

AI is now used by large Japanese retailers to monitor sales in an attempt to reduce overstocking, to check whether products have been damaged during shipping, and to provide discounts on unsold food.

Convenience chain Lawson Inc in Japan now uses artificial intelligence to estimate how much of the product for sale, from onigiri rice balls to egg and tuna sandwiches, may go unsold or fall short of demand, Reuters reported. Lawson aims to reduce excess-stocking by one-thirdand halve food waste at all stores by 2030 compared with 2018 amounts.

The private sector has been given incentives and encouragement to limit food waste. According to Hong Kong’s environment department, by January 2021, 23 non-government organisations had been funded to run 37 food waste-minimisation projects and 61 food rescue operations across the special administrative region. 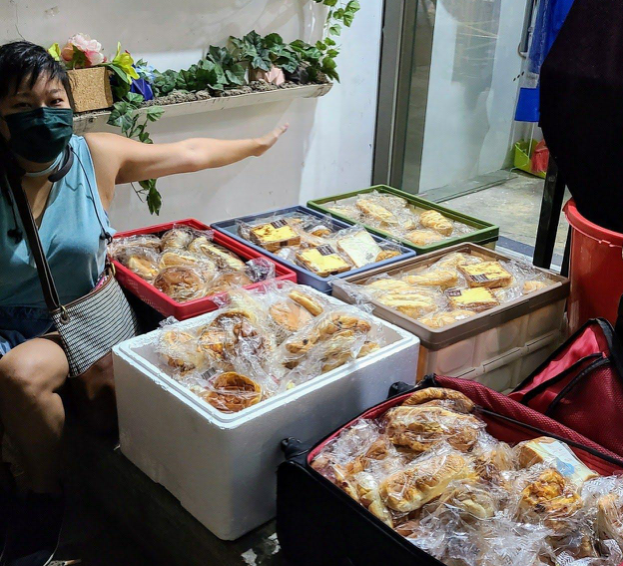 Breadline, a Hong Kong web app developed by Baptist University assistant professor Daisy Tam, has volunteers who transport leftover bread and bakery goods to charities for those Hong Kong residents who often can’t afford to feed themselves. A volunteer who has registered with the Breadline app picks up donated loaves at a bakery’s specified time and delivers them directly to a nominated NGO.

Tam won a Fulbright scholarship to MIT in 2018 to create the Breadline app, now run as part of her HK FoodWorks research organisation. “I came back to Hong Kong in 2019, and we have been in full operation for about a year now,” she says, adding that she collaborates with local charities on various food rescue operations.

Although some bakeries stopped donating bread during the Covid-19 pandemic, Breadline operations continued with the bakeries that carried on with the program. To date, Tam says, Breadline has delivered 27,000 loaves of bread, “so 27,ooo breakfasts if you like”.

“I’m really interested in a decentralised system, where people are enabled by technology,” Tam says. “Volunteers can act very independently, which worked out really well during Covid because we were able to continue operations.”

Food rescue is an important way to minimise food waste, she says, and more efficient than collecting food waste and composting it, or converting discarded food into biofuel – both methods also used by the Hong Kong government.

Since Hong Kong’s recycling operation O.Park 1 began operations in 2018, it has used anaerobic digestion technology to convert nearly 82,000 tonnes of food waste into biogas to generate electricity, the environment department says. O.Park has a capacity of 200 tonnes a day, and uses microorganisms to break down the food in an oxygen-free environment. The waste residue is converted into compost for use in landscaping and agriculture.

“To be honest, I think not enough is being done, even though there is a good vision and guidelines towards reducing food waste,” Tam says.

“We all want to be more sustainable, especially in an urbanised environment. But a lot of the interest and effort has gone into waste to energy, and composting – looking at non-edible food waste and making it something else.”

After shops close and can’t sell food, but before the food begins to rot, there’s an “in-between time”, of a few hours she says, when the loaves, or fruit, or vegetables can be channelled to the poor.

“Before we think about how to transform food into something else, let’s just treat food as food,” she adds. “Let’s get food to where people need it.”