If nothing else, the torrent of revelations released on the WikiLeaks whistle-blower website has changed our understanding of how the world works. It has also landed key WikiLeaks figures in an ocean of trouble.

Legions of supporters view founder and editor-in-chief Julian Assange and his faithful insiders as rebellious truth-seekers; dodging lawsuits and criminal investigations, doing battle with global finance and taking on the might of the United States government. Critics, on the other hand, regard the WikiLeaks crew as dangerous, law-breaking, cyberfreak misfits.

WikiLeaks, which was launched in 2006, invoked the wrath of the US authorities in 2010 when it published a chilling video shot from the cockpit of an Apache helicopter showing a group of mostly unarmed men – including two Reuters employees – being gunned down in Baghdad by American airmen. WikiLeaks enraged those authorities further later that year when it started to release hundreds of thousands of leaked US State Department cables. Certainly, some of the cables have been explosive. One 2007 cable describes how Israel’s spy organisation, Mossad, was contributing covert assistance to Saudi Arabian intelligence.

In 2008, a cable noted that Saudi Arabia’s King Abdullah repeatedly asked the US to “cut off the head of the snake” by launching military strikes to destroy Iran’s nuclear programme. A 2009 cable described the visit of an Afghanistan vice-president to the United Arab Emirates: it was discovered he was carrying US$52 million in cash.

In other cables, an Olympic Azerbaijani boxer, accused of bribery last year, was described by an American diplomat as an important and corrupt player in the country’s government; and, in 2009, US diplomats reported on an unexpected relationship between the then Russian prime minister Vladimir Putin and the then Italian prime minister Silvio Berlusconi, which featured “lavish gifts”, expensive energy deals and a “shadowy” Russian-speaking Italian linkman.

In India, political rage erupted when WikiLeaks published a 2009 cable noting that Rahul Gandhi, son of Sonia Gandhi and heir apparent to the Congress party, had told the US ambassador that radical Hindu groups could be a bigger threat to India than Pakistan-based Islamic militants.

Other published cables had more tangible effects, such as those that stoked the fury of the people of Tunisia, which eventually led to last year’s toppling of autocrat Zine El Abidine Ben Ali and his muchhated regime. Cables from 2008 and 2009 noted the staggering kleptocracy in Tunisia and shone a spotlight on the massive profits the then first lady may have made from a private school and the opulent mansion under construction for Ben Ali’s son-in-law on land that had been initially expropriated for the water authority, among much else.

Simmering fury erupted in a savage wave, sweeping away the regime and igniting civil unrest across the region.

It is perhaps too much to say that WikiLeaks has played a significant role in the upheavals that have seen nations as disparate as Egypt, Syria and Libya revolt against despised leaders but few doubt the cables it has published have fanned the flames.

The consequences and damage to US diplomacy resulting from the cables, which had been sent from American embassies, consulates and diplomatic missions, is harder to gauge. First published in heavy-weight broadsheet newspapers such as The Guardian in Britain, Le Monde in France, El Pais in Spain and Der Spiegel in Germany, the cables are still up, for anyone to read, on the WikiLeaks website (www.wikileaks.org) – assuming, of course, you can log on.
The site was brought down for more than a week last month by a “distributed denial of service” attack, apparently launched by a shadowy group called AntiLeaks. The group is led by a hacker who calls himself, or herself, DietPepsi, who claims its followers are young US citizens. 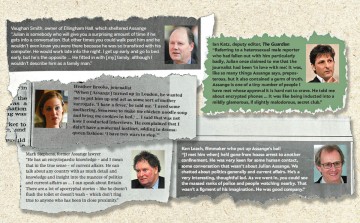 AntiLeaks communicates on Twitter and via an e-mail address (although the AntiLeakers didn’t respond to e-mailed queries from Post Magazine).

“Assange is the head of a new breed of terrorist,” claims DietPepsi in the group’s Twitter manifesto. “We are doing this as a protest against his attempt to escape justice into Ecuador. This would be a catalyst for many more like him to rise up in his place.”

Flooded with a vast torrent of electronic traffic, the WikiLeaks website was effectively closed down, along with its mirrors, just as its most recent revelations were making headlines. Culled from a large cache of leaked information from the private “global intelligence” company Strategic Forecasting – more commonly known as StratFor – news had emerged of a surveillance tool called TrapWire. WikiLeaks began publishing a trove of StratFor e-mails in February, thought to have been provided by the hacker group Anonymous, and the sophisticated digital surveillance system TrapWire caught the world’s imagination.

A software system devised to pick up suspicious behaviour by analysing footage from civilian closed circuit television camera systems, it spawned a cascade of “big brother” criticism. According to the StratFor e-mails, TrapWire was or is operating in “every [important site] in New York City, Washington DC, Las Vegas, Los Angeles, London and Ottawa”.

More recently, a huge cache of information from Syria has been published by WikiLeaks, and it, too, appears to have been sourced by Anonymous, perhaps working with other hacker groups. The millions of e-mails will take a long time to sift through.

Some leaks have not lived up to their early promise: Rudolf Elmer, of Swiss bank Julius Baer, helped bring the WikiLeaks website to prominence in 2008 when he leaked client details (which, some people have claimed, were partly faked) to the organisation. Last year, he handed two discs of data to Assange at a press conference. These discs, he had claimed, included details of many “high net worth” individuals’ efforts to evade tax.

Elmer was arrested and found guilty that year of breaching Swiss banking secrecy, but was sentenced to a minimal, suspended fine. None of the information he handed over has been published.

WikiLeaks has elicited mixed opinions on its aims and its means.

US Secretary of State Hillary Clinton has said the massive dump of US cables “put people’s lives in danger” and “threatens national security”. Former US secretary of defence Robert Gates was a little less dramatic: “Is this embarrassing? Yes. Is it awkward? Yes. Consequences for US foreign policy? I think fairly modest.”

The fallout of the revelations has been much graver for some of those on the inside. Assange, of course, is staring down the barrel of sexual assault allegations in Sweden, which could lead to a heavyweight espionage prosecution in the US. (As this article went to press, Assange, an Australian citizen, was still in limbo in Ecuador’s embassy in London, unable to reach the South American country that had offered him sanctuary).

The man alleged to be WikiLeaks’ No 1 source, US serviceman Bradley Manning, is facing a court martial, which is likely to officially begin before the end of the year, perhaps as early as this month.

Manning, it should be remembered, remained true to the principle enshrined at the post-second world war Nuremberg Trials that every soldier has the right to make moral choices. Arrested in 2010, he may well be sentenced to life in a military prison.

We may soon have a better idea of how much WikiLeaks has cost the US. Judge Denise Lind, who is presiding over Manning’s pre-trial hearings in the state of Maryland, has ordered weighty assessments. The defence team has been given the main findings of a State Department investigation into the impact of WikiLeaks, presumably based on reports from embassies and missions around the world. Lind has also ruled that prosecutors must provide damage assessment reports from the CIA, the FBI and the Office of the National Counterintelligence Executive.

SUELETTE DREYFUS, a research fellow at the University of Melbourne, in Australia, has known Assange for more than 17 years.

She employed him to work as a researcher on a book she was writing, Underground: Tales of Hacking, Madness and Obsession on the Electronic Frontier, which was published in 1997, and they have stayed in touch. She regards him as extremely intelligent and sees his fears of US prosecution as entirely reasonable. Assange, she says, has an exceptional ability to look at a particular social and political landscape and understand it in a strategic, dispassionate, analytical, whole-picture way. Yet despite this broad understanding, she adds, he isn’t good at reading individuals.

Dreyfus believes WikiLeaks is a remarkable achievement, and a blunt instrument. “What it has done is really important,” she tells Post Magazine. “It has shown up an incredible amount of behind-the-scenes manoeuvring; how the world really works.”

Assange, she says, was worried about the slow decline of investigative journalism. “He saw this as being very dangerous for society.”

She believes that after a decade of lazy self-censorship and bending to the US government line, journalists have been emboldened by WikiLeaks – yet they generally give Assange no quarter, and, of course, more recently, Assange himself has become the story. 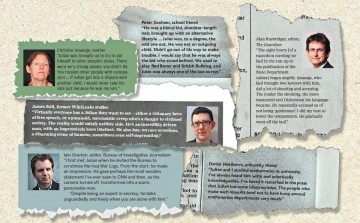 Assange’s legal problems have rumbled on alongside ever-burgeoning tribulations at WikiLeaks. According to Wired.com, several WikiLeaks insiders resigned in late 2010, including German Daniel Domscheit-Berg, then known as Daniel Schmitt. They were apparently upset because Assange had secretly provided newspapers with embargoed access to the WikiLeaks database of Iraq war documents, and some feared the information hadn’t been properly scrutinised for dangerous revelations.

Other early WikiLeaks insiders, such as Icelandic MP Birgitta Jonsdottir, peeled away for other reasons. When the sex crime allegations first emerged, in 2010, she apparently wanted Assange to stand aside to ensure the turmoil in his personal life didn’t obstruct WikiLeaks’ work, and she told The Daily Beast website that it was time to “let some other people carry the torch”. Another early Icelandic collaborator, Smari McCarthy, recently interviewed by the Australian television programme Four Corners, says he has been stopped by shady characters who insisted they were from the FBI. But McCarthy left WikiLeaks long ago, he told Britain’s The Independent newspaper, because he was concerned about the direction the organisation was heading in and because of the political infighting.

Some of the partings were acrimonious. Domscheit-Berg told Der Spiegel he had destroyed 3,500 unpublished files that had been sent to WikiLeaks, including five gigabytes of Bank of America documents and detailed information about 20 neo-Nazi groups, to ensure sources weren’t compromised. WikiLeaks, in turn, accused Domscheit-Berg of theft and sabotage. Domscheit-Berg went on to write a book about WikiLeaks and set up his own site – OpenLeaks, which now appears to be dormant.

Last year, the entire file of US cables held by WikiLeaks was published online – unredacted. The names of informants, collaborators, conspirators; all there to be read. WikiLeaks claimed the password to an encrypted cache of cables had been published in a book written by journalists from The Guardian – the newspaper denied the claim and WikiLeaks, and particularly Assange, were widely criticised for the release.

All the while, and perhaps most importantly for the WikiLeaks insiders, global financial organisations had been moving to tourniquet the money flow to the activists and the website.

“After WikiLeaks’ publications revealing US war crimes and statecraft in 2010, US financial institutions erected a banking blockade against WikiLeaks wholly outside of any judicial or administrative process,” its website says. The efforts by Visa, Mastercard, Bank of America and other institutions worked, the organisation adds, blocking 95 per cent of donations. Assange declared in October last year that publishing on the website had been suspended so WikiLeaks could concentrate on its financial survival. In July, WikiLeaks announced it had found a back avenue for donations via a French non-profit organisation, which gave it the wherewithal to publish the StratFor and Syria leaks.

Yet it seems times are still tough. A notice posted on the website asks for help: “Our battles will be costly. We need your support. A handful of US finance companies cannot be allowed to decide how the whole world votes with its pocket.”