Shifting and giggling, the tourists and locals wait to pose with a mural painted on a dilapidated Penang street wall. An image of two laughing children on a three dimensional bicycle, the mural is a striking and thought-provoking contrast of forms. It is art that begs for interaction and it has proved incredibly popular in Penang’s historic capital, George Town. Smiling children stand next to the bicycle and the painted riders; adults pretend to push the bike; young women line up next to the light-hearted portrayal of childhood joy.

The work of a 26-year-old Lithuanian artist, Ernest Zacharevic, the bicycle mural and seven other street art murals he has painted have been adopted by the people of George Town. Along with the bicycle, there is a mural incorporating a small boy reaching for a real and three-dimensional hole in a wall; a mural incorporating a real motorbike and one of a small girl walking an imaginary tightrope along real power lines.

Zacharevic has been both delighted and surprised by the attention, which has elicited nearly 28,000 likes on his Facebook page and numerous press mentions. “I like your painting so much I keep going,” comments Soo Wai Kin, and “I was there last week, took a shot with the boy, great painting!” from Jennifer Thomas.

Commissioned earlier this year, the murals have taken on a life of their own. “It’s my contribution to the George Town Festival”,  Zacharevic told The Post magazine. “They were looking for contributions; the director was aware of my work.” 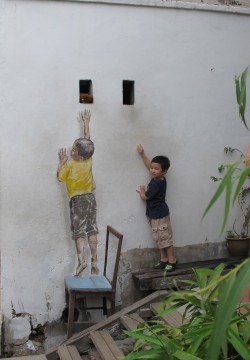 Many of his murals feature children but he says there was no deliberate childhood theme to his George Town murals; one of which features an old trishaw driver. “The subjects just came up; it wasn’t a conscious decision. I work a lot with kids.” Some of the murals are extremely large, some are human-sized: all have been painted with the site in mind. The larger murals are up high, and the size ensures they are visible to viewers at street level. “I always try to make it more interactive and more site-specific,” Zacharevic says.

After living in Penang for nearly two years, more recently he has travelled to Belgium to work on some street art there (which has already been lauded in the Belgian press), but he has determined Asia will be his home for the foreseeable future.

Occasionally described as “Banksy-esque”, Zacharevic says he has yet to tire of comparisons with the famed British street artist. Banksy, like Zacharevic, often uses three dimensional elements in his work and the notoriously anonymous artist now has a cult following around the world. “Not quite bored yet,” Zacharevic says. “Some locals have compared my paintings to Picasso; he’s the only painter they know. People who compare me to Banksy; he’s the only street artist they know. But Banksy—he was a big inspiration on my work, I grew up seeing his career grow.”