Thaksin ‘clone’ wins on her own

Yingluck Shinawatra is the smiling new face of Thai politics. Friendly, extremely attractive, conciliatory: the one-time business executive might be the circuit-breaker the deeply polarised nation so desperately needs. The youngest sister of former prime minister Thaksin Shinawatra, 44-year-old Yingluck will almost certainly become Thailand’s first woman prime minister. She seems to have politics in her bones, but whether she can get out from under her brother’s long shadow remains to be seen.

The Shinawatra name pushed her into prominence, but it is also anathema to many in the Thai establishment. A lot is riding on her ability to negotiate a very rocky road that twists through implacable anti-Thaksin activists, bends round the immovable Thai monarchy and the largely disapproving business and bureaucrat establishment, and avoids the obstacles of military intransigence.

Sometimes known by the nickname Pou, yesterday Yingluck was hard at work hammering out a workable coalition with minor parties. Although her Puea Thai (For Thais) party won 265 seats of 500 in Thailand’s parliament she needs a more substantial majority in case some of the winning candidates are “red-carded” by the Election Commission for vote fraud. 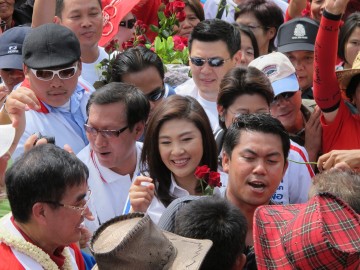 Nervous Puea Thai supporters expect the Commission to bend over backwards to reduce the party’s majority. A member of the Commission has reportedly said there had been 1900 reports of electoral fraud reported so far, mostly in the north and north-east, Puea Thai’s heartland. But it seems unlikely the Commission will overturn the overall election result and reverse the Puea Thai victory. The voters have chosen Yingluck and Puea Thai and any attempt to thwart the win would be dangerous. Thailand would immediately explode into violence and reprisals.

Yingluck doesn’t appear to have put a foot wrong in the campaign and she hasn’t been the target of much media criticism, despite ducking the hard policy questions and politely declining to debate Abhisit Vejjajiva, who has been Thailand’s prime minister for the past two and a half years.

She has never had to deal with Thailand’s irritable military chiefs before, but she quietly handled some outrageous politicking from the nation’s army chief, General Prayuth Chan-Ocha, a noted royalist and a hardliner who is known to despise all Thaksin-allied parties and politicians. Against all protocol, General Prayuth went on television in the middle of the campaign to tell Thais not to vote for Yingluck’s Puea Thai party. He didn’t mention the name of the party, but the message was clear. “I have said that some politicians act inappropriately, then, why do you still want to vote for them?” he asked. “(You should) vote for good and polite ones who intend to work for the nation, to work for you.” Yingluck’s reaction to this blatant piece of electioneering by the general? “The military can show its stance and its role,” she said. “I don’t mind.”

Is there steel behind this façade of gentle reason? On the campaign trail her mettle showed. The convoy of four-wheel drives carrying staff and journalists sped from engagement to engagement, waiting for no-one. On one particularly gruelling day Yingluck had 14 stops. And besides the set-piece speeches and appearances which peppered every day of travelling through Thailand’s rural districts, there were door-stop press conferences and meetings and lunches and dinners with local dignitaries.

Yingluck remained unflustered and unflagging, as western journalists peeled off, exhausted. Her elder sister sometimes travelled with her; sometimes close friends were in her car. She is not a natural orator, but she learned to keep the audience with her – although her speech didn’t appear to vary much. She doesn’t speak English fluently, but she nevertheless soldiered on with foreign diplomats and journalists.

Sitting in a plane, on the way to the northern town of Phitsanaloke and yet another round of campaigning, she seemed remarkably unflustered by questions that, after all, query her competence and experience. But, as she says, she has had experience in management. Until a few months ago she had charge of a listed property developer, majority-owned by Thaksin’s children. In the five years that she ran it, SC Asset Corp – which was spun out of Thaksin’s Shin Corp, more than doubled its value, while the broader Stock Exchange of Thailand index went up by 45 per cent. She was also a director of Manchester City Football Club and CEO of AIS, a telecoms company founded by Thaksin and now Thailand’s largest mobile telephone carrier. Yesterday investors appear unfazed by the election result and Yingluck’s ascendancy: the Stock Exchange of Thailand index rose 4.1 per cent.

Abhisit, amongst others, questioned Yingluck’s political experience and her capability to lead Thailand. She remains unfazed as she responds, sitting upright and concentrating on the conversation. “That’s what he said, but other people might not say it like him,” she says. “He can say whatever. People will consider it by themselves. I believe I have more experience than him in terms of management. I ran a company. I believe I can do better. (There are) those who say the Puea Thai party doesn’t have experience; but we used to be the government before Abhisit.”

The mother of a nine-year-old son, Yingluck softens when she speaks about her boy, who has not been particularly impressed by his mother’s long absences nor by the massive media scrutiny. “I told him I am doing it for the country,” she says. “He might lose his privacy for a while, but I told him I love him and I need to help the country.”

Yingluck insists she is her own woman, even though Thaksin called her his “clone”, and the Puea Thai slogan “Thaksin Thinks, Puea Thai Acts” made it clear he was the driving force behind the party, the latest incarnation of the parties that followed on from his disbanded Thai Rak Thai party which dominated Thailand for years. But Yingluck says she only spoke to him sometimes during the campaign, as brother and sister naturally would, denying rumours that he manipulated her every move from his home in Dubai.

Ousted in a bloodless military coup in 2006, Thaksin was perhaps the most wildly popular prime minister Thailand has ever had, as well as being the most hated. The telecoms billionaire brought politics to the people; he devised populist policies, and he often kept his promises. But he was guilty of outrageous human rights abuses. The 2003 so-called ‘war on drugs’ appeared to consist largely of the extra-judicial killing of 2,000 drug dealers. And under Thaksin’s rule the security forces came down hard on Thailand’s Muslim communities in the south of the country, with arbitrary arrests and “disappearances”.

But it was Thaksin’s increasing power and graft that was the catalyst for his ousting – the military coup-leaders promised to reform government and fight corruption. Removed from office, he was finally prosecuted and convicted in absentia of conflict of interest violations. Jumping bail he fled Thailand in 2008, and he has lived in exile to avoid a two-year jail sentence ever since.

Now he might be back. His potential return to Thailand elicited some acrimony during the campaign, and the election was widely referred to as a “referendum on Thaksin” or a “referendum on Thaksin’s return”. Yingluck said that Thais convicted of “political” crimes should be offered an amnesty, but she didn’t specifically mention her brother – who says his corruption conviction is indeed political. He wants to come back to Thailand. His daughter is getting married at the end of the year, and he has talked about coming back for the ceremony. On election night he hogged the limelight for a while, giving a series of interviews to Thai and international media.

But the return of the eminence grise of Thai politics would likely spark a conflagration. The activist yellow-shirts of the People’s Alliance for Democracy, who overran Bangkok’s airports in 2008 and effectively toppled the last Thaksin-aligned government, have promised to take to the streets again if Thaksin comes back, although it isn’t clear whether they bear the same animus towards Yingluck. Although the yellow-shirts have seemed rudderless lately, splitting from the Abhisit’s Democrat party and advocating a “no” party vote, it would be foolish to underestimate their resilience or their hatred of Thaksin.

Dr Thitinan Pongsudhirak, a political scientist at Chulalongkorn University in Bangkok, says Puea Thai should tread carefully. He has called for a “grace period”, saying Thaksin should take his time in coming back, Puea Thai should not sack the army chief, should not sack senior bureaucrats and should refrain from elevating Puea Thai parliamentarians who are also leaders from the activist red-shirt movement into the ministry, at least in the short term. Tens of thousands of United Front for Democracy against Dictatorship red-shirt activists protested for weeks on end in central Bangkok last year, demanding Abhisit’s resignation and an election. More than 90 people were killed during the protests, hundreds were injured and buildings across the city were set on fire. Dozens of red-shirts, including the leaders, were jailed.

Abhisit and his Democrat party campaigned on the idea that to return Puea Thai would be to give red-shirt terrorists power, presenting film footage to a rally and erecting billboards of Bangkok in flames, but Yingluck did not respond with any heat. Thitinan, though, says time is now needed to let passions cool. He is no fan of Thaksin, but he acknowledges the ousted leader’s accomplishments, and the blossoming of political awareness amongst Thailand’s poor and marginalised.

“His greatest crime and gravest sin: he has changed the way we were,” Thitinan says. “We are no longer the same; we will not be the same.” And he has a plea for Thailand’s establishment figures, called ‘poo-yai’ in Thai: “To the poo-yais – please allow us to enter the 21st century.” Ordinary people, he adds, want their votes to count; they want to be heard, to be heeded.

The military, naturally, is up there in the poo-yai stakes. Thailand has endured 18 coup attempts, 11 of them successful, since the abolition of absolute monarchy in 1932. The most recent was the removal of Thaksin in 2006 (in a coup led by a general who stood in the weekend election), and there has been a lot of nervous speculation that the armed forces will do it again, removing Yingluck as they removed her brother.

But Army chief General Prayuth appears to have been muzzled, at least for the time being, and the outgoing defence minister, General Prawit Wongsuwon, yesterday declared the armed forces were standing easy. “I have talked to military leaders. We will allow politicians to work it out. The military will not get involved,” he said. “The people have spoken clearly so the military cannot do anything. We accept it.”