Horror years of slaughter and depravity linger in the minds of hundreds of Queenslanders. Refugees from the mindless brutality of Cambodia’s killing fields, they breathe the free air of Australia and remember a time of starvation and blood-soaked despair. And they watch as the leaders of the ultra-Maoist Khmer Rouge regime escape justice one by one. Now Ieng Sary, the one-time Khmer Rouge foreign minister and once one of the most powerful men in Cambodia, is dead of natural causes. He was on trial, but the 88-year-old killer had never been formally pronounced guilty of war crimes.

Nary Ky was only 13 when the black-clad Khmer Rouge warriors invaded Phnom Penh in 1975 and emptied the city in a matter of hours. “They won the war early in the morning, and by nine o’clock, Phnom Penh was evacuated. I went with millions to the eastern part of Cambodia, where I was forced into forced labour and we lost a few in our family.”

Now living in Brisbane, he remembers the horror vividly: the hunger, the deaths, the hatred.  Members of his own family turned against him, even though he was just a boy. 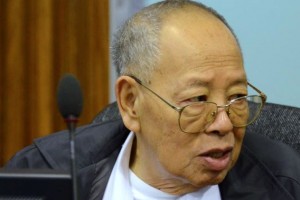 “I was there for about six months. I was ignored by my own relatives, my auntie, my uncle, because they classified us as ‘new people’ and they were revolutionaries, they belonged to the Khmer Rouge. I saw the killing. I saw people starving, including some of my family. Two of  my grandparents died there.”

Most Cambodian families lost relatives to the brutal rule of the Khmer Rouge, now seen as one of the most blood-stained regimes in human history. Over five years in the 1970s, the Khmer Rouge instituted wholesale slaughter across Cambodia. Even so, justice has been elusive for the leaders who presided over one of the most murderous regimes the world has ever seen.

The crazed supreme leader, Pol Pot, is long dead – of illness in his jungle hideout. Many other former Khmer Rouge chiefs live free. A number of them even wield power in Cambodia’s government and institutions. The Extraordinary Chambers in the Courts of Cambodia, usually referred to as the Khmer Rouge tribunal, has only a single conviction to its name.  In 2010, one of the Khmer Rouge regime’s most brutal functionaries, former torture prison chief Kaing Guek Eav, known as “Duch”, was convicted of crimes against humanity, murder and torture committed during the depraved Khmer Rouge rule. 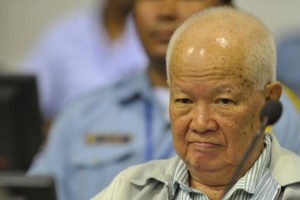 The tribunal’s second and no doubt most important trial, against four of the Khmer Rouge’s supreme leaders, has been running since 2011. The death in mid-March of Ieng Sary, one of the four, prompted an outburst of lamentation around the world. Many Cambodians were furious that the one-time Khmer Rouge leader largely managed to escape punishment. Arrested several years ago, he was kept in relatively comfortable detention with immediately available medical care.

The second of the four accused, Ieng Sary’s wife, 81-year-old Ieng Thirith, was another of the Khmer Rouge leaders — the regime’s social affairs minister. Diagnosed with Alzheimer’s disease, she has been excused from standing trial because she is considered unfit to plead. It’s almost certain she will never be prosecuted. The tribunal will forge ahead with the trial of two remaining leaders, but Nuon Chea, the regime’s chief ideologist, is 86 and his health is faltering. Khieu Samphan, titular head of state under the Khmer Rouge, is 81. 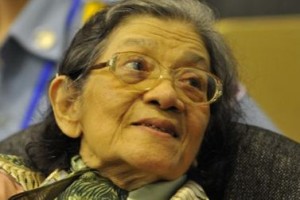 The merciless ultra-communist leaders and their henchmen killed – either directly or indirectly – one fifth of Cambodia’s population in a few short years. Vietnamese forces invaded Cambodia in January 1979 and the Khmer Rouge regime came to a shuddering halt, after nearly four years of horror and the deaths of 1.7 million Cambodians. A small and secretive clique of paranoid despots, including the two who remain on trial in Phnom Penh, ordered the extra-judicial execution of more than 200,000 “party enemies”; abolished money and private property, schools and temples; persecuted city-dwellers and intellectuals and plunged the nation into blood-soaked despair.

Cambodians living in the towns and cities were driven into the countryside and forced to labour long and hard, with very little food and no medical treatment. They died in their hundreds of thousands.

Essentially Maoist, the Khmer Rouge believed in continuous revolution, which required direct killing: ongoing purges of the party’s enemies. When no real enemies could be found, ordinary Cambodians were rounded up and forced to confess to fictional treachery and, worse, forced to implicate lists of their friends, relatives and associates. More than 14,000 prisoners were held at the S-21 Tuol Sleng prison by the paranoid regime. Most were tortured, with whips, beatings, electric shocks, pliers and water immersion. Most provided pitiful and often fictional confessions, many admitting to fanciful sins, such as working for the CIA, the KGB or the north Vietnamese. All but a handful were summarily executed, usually with an iron bar to the back of the neck, their bodies kicked into pits in the killing fields. 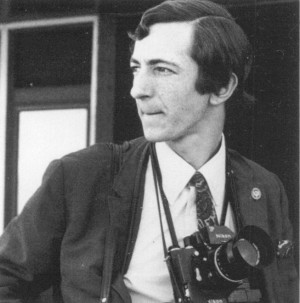 A few Australians were caught up in the Khmer Rouge horror. Alan Hirons, a 24-year-old photographer from Melbourne, was abducted a week after he arrived in Cambodia in 1972. Snatched from a car on a rural road, he was marched across rice fields, kept captive in a village and finally executed. Two Australian yachtsmen, Ronald Dean from NSW and David Scott from Western Australia, were captured off the coast of Cambodia in 1978. Taken to the notorious Tuol Sleng prison, they were tortured into confessing they were CIA agents and then executed.

Investigators have discovered that senior Khmer Rouge officials, like those indicted by the Khmer Rouge tribunal, had their eyes open to the horror wave of torture and murder that engulfed Cambodia in the 1970s. And even those ministers couldn’t always escape the paranoia and the barbarity. Hu Nim, at one time the Khmer Rouge information and propaganda minister, was accused of treachery. His torture confession ends with the desperate sentence:  “I am not a human being, I am an animal.”

Despite a wealth of documentary evidence implicating a broad range of Khmer Rouge officials, Cambodia’s wheels of justice are grinding exceedingly slow, hampered by the nation’s autocratic prime minister, Hun Sen who is doing his best to thwart both investigations and current trials at the Khmer Rouge tribunal. Storming and threatening, he has warned investigators not to proceed with their work, and he has even said that any more Khmer Rouge prosecutions could rekindle civil war in Cambodia.

A former Khmer Rouge fighter himself, it seems he fears any comprehensive probe will reach deep into his government. Meanwhile, the tribunal, a joint UN Cambodian exercise, is seething with hostility and perennially running short of funds. Judges have resigned in rapid succession. Long unpaid staff have gone on strike. In poverty-stricken Cambodia, where hunger is often just around the corner, the tribunal had cost US$175.3 million ($168.4 million) by the end of last year. Australia has donated more than $18 million.

Ken Lee, a 65-year-old survivor who now lives in Brisbane, says many Cambodians who escaped the Khmer Rouge have made a home in Queensland. They would like some kind of reckoning.  “My parents died of starvation,” he says, matter-of-factly. “I hate the Khmer Rouge. I hate them very much.” He was 24 years old and living near the Thai border when he ran from the Khmer Rouge and slipped across the border into Thailand. His parents lived in Kampot province, in southern Cambodia. He never saw them again.

“I didn’t see, I didn’t know where my parents were. I lived in a refugee camp for nearly four years in the hope that I would find out something about my parents. People who came later told me that most of the people who lived in Kampot province were killed by the Khmer Rouge. They died from starvation. So far I don’t know where the bodies of my parents are, I don’t know. I went back just a few years ago to find them, to ask and find where their bodies were. But I failed, so I came back. My grandmother, my uncle, my auntie. Everybody died. They died of starvation.” Lee’s wife, Eng Ly Lee, lost her father and six brothers to the Pol Pot regime.

The death of Ieng Sary has rekindled Lee’s anger. “I still think there’s an injustice,” he says. “Most of the people feel frustrated he died. He died, now what can we do?”

Like many others, he thinks the tribunal has been  an appalling waste of money.  “They are wasting financial assistance. It’s been nearly 13 years and I can see nothing is happening. I keep an eye on it, but nothing happens. Why do they continue? Nothing happened. What for they are wasting the foreign assistance? They are giving a lot of money to the Cambodian government and so far nothing happened. And then those humans were killed, the human slaughter, they are dead already.”

Like Lee, Nary Ky, who was hounded by the Khmer Rouge as a boy, wonders at the world’s priorities. “Until now we don’t know what’s happening to the two million people they murdered or left to starve to death. I cannot comprehend that so many people died there and no-one intervened. The tribunal is only a drop in the ocean. It serves nobody any purpose. It wastes time, it wastes money.” 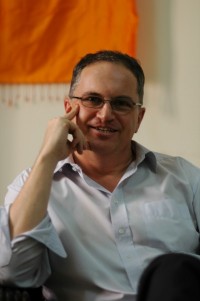 The Khmer Rouge tribunal has its own purpose-built building on the outskirts of Phnom Penh, a showpiece of sleek modernity, where lawyers and bureaucrats bustle through each working day. At least one Cambodian opposition politician regards the multi-million dollar edifice with a jaundiced eye. Son Chhay, who lives in Adelaide for part of the year, has never endorsed the tribunal. The Khmer Rouge leaders, he believes, should have been hanged long ago. The Cambodian government, he says, is trying to delay proceedings until all the one-time Khmer Rouge leaders die of old age: an attempt to prevent them from making any declarations that could embarrass the government.

“In fact I think we never believe in this tribunal, we never believed that we were going to get justice in the first place,” Son says. “We know that never before have war criminals been tried in a mixed court system like Cambodia. So we are disappointed that we have been treated like second-hand human beings. We all know that it wasn’t going to bring any justice to all the victims of the Khmer Rouge.”

Bill Smith, a lawyer from Adelaide, has been working as the Khmer Rouge tribunal’s deputy co-prosecutor for a number of years now. He knows, from the inside, just how difficult it is to keep the line of impartial justice working in a system that has to fend off political considerations as well as dealing with funding shortfalls. Yet he believes the effort to conduct a clean and fair trial is always worth the effort, even when the elderly accused are not likely to see the end of the process. The average life expectancy in Cambodia is 60. Only three of the four former Khmer Rouge leaders are still alive and one is mentally impaired. All three have been living on borrowed time for about 20 years.

It’s important for Cambodia to know that no-one has impunity, he says. “No matter what happens, no matter what problems there are outside in the country, the courtroom is the test. We have to make sure that we meet that test in terms of independence and impartiality and it’s difficult.”