Roles are reversed for rebels

Weary and feeling her age after the bloody 2010 uprising in Thailand, Thida Thavornseth was a sudden and unexpected rebel leader. Yet she could hardly refuse to to take the chair of the insurgent red-shirt movement. Crushed by Thailand’s military, with most leaders jailed, the red-shirts were at a standstill. 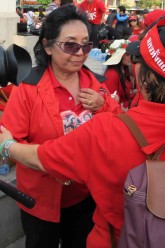 Now, after nearly three years at the helm of the red-shirt movement, and with a sympathetic government in power, it seems Thida’s work is not yet finished. Followers of the opposition Democrat party last month took to the streets to demand change, and they have warned of violence to come.

It’s almost a reprisal, in reverse, of the events that pushed Thida into power. In 2010, several tumultuous months of political unrest rattled Thailand. Characterised by a fortified encampment in central Bangkok, mass rallies and a Thai military mobilisation that left more than 90 dead on the city’s streets, the red-shirt uprising was bloody and bitter. And, eventually, the rebels were defeated.

Their CBD encampment was demolished and hundreds of red-shirts were arrested and jailed, including most of the movement’s leaders. Their push to overthrow the Democrat-led government, seen by the red-shirts as elitist and unrepresentative, was stalled.

Within a couple of months of this comprehensive rout, Thida was drafted as chair of the red-shirt movement, more formally known as the United Front for Democracy against Dictatorship or UDD. Her husband, red-shirt luminary Dr Weng Tojirakarn, was in prison, along with most of the movement’s leaders. Then 68, a microbiologist and one-time university lecturer, Thida took on the mammoth task of leading the shattered group, concentrating on the effort to improve the lot of Thailand’s poor and disenfranchised.

“I didn’t expect this (to become UDD chair) before, maybe because I’m too old to do this kind of job,” she says, laughing. “But the situation forced me to be in this position, and we are trying so much now to try and upgrade the people’s position. All we care about is upgrading their position; then they will make their own decisions.”

The year after the uprising, the red-shirt aligned Puea Thai party, popular in the nation’s impoverished regions, won an election and took office. Thida’s husband is now a member of parliament, and the red-shirts have the ear of power, but the forces that have ripped Thailand apart so many times are still in play.

Thida has long been politically active. She and her husband joined Thailand’s communist party and eventually fled to the jungle in 1979 where they lived in hiding for six years.

Mobilised by the military coup that ousted former prime minister Thaksin Shinawatra in 2006, they are still passionate about equalising Thailand’s remarkably polarised society, where a thin layer of uber-rich fight to maintain control over a mass of under-educated and often landless poor, many from the nation’s rice-growing north-east.

“The origin of the UDD was because we wanted to try and oppose the coup,” Thida says. “Because we don’t want any kind of coup in Thailand.” Thailand has weathered at least 18 coups, military and judicial, and Thida says the rule of law should be paramount. Telling a reconciliation forum in late August that if Thailand developed beyond its coup-prone history the work of the UDD would be done, she said the aim of the movement was “true democracy”.

Thida and the UDD are pressing for an amnesty decree or an amnesty law to free on bail some of the 30 or so red-shirt followers incarcerated in Thailand’s noisome and horribly over-crowded jails. Other red-shirts languish in exile, fearing to come back to Thailand for fear of being hurled behind bars. Many hundreds of others are out on bail, and concerned about unfair legal process.

“We are worried about these people, especially the people in the jails”, Thida says, “that’s why we need to have an amnesty bill, or amnesty decree.”

The very idea of an amnesty has drawn fire from those who oppose the current government, and who oppose the red-shirt movement in general. Furious, they allege it is a transparent ploy to wangle Thaksin back into Thailand (the former prime minister skipped bail on corruption charges in 2008 and now lives in exile).

Grappling yet again with the seemingly insurmountable problems engendered by Thailand’s inability to reach compromise and consensus, Thida flatly denies the amnesty has been pushed with Thaksin in mind. “Thaksin? No, no, no.”