Refugees on a hiding to nothing

ALAM Shamsul Alam ran for his life. He ran barefoot across paddy fields for kilometres, then leaped into the sea and swam for two hours in a bid for freedom. He was eventually picked up by fishermen and handed to the police.

According to Malaysia’s The Star newspaper, the Burmese asylum-seeker was riding his motorbike in Penang on the weekend when he clipped a car. Apparently he didn’t have a motorbike licence, but instead of apologising and offering to pay for the damage, the 26-year-old panicked and fled. He is probably now languishing in an immigration detention camp.

The refugees and asylum-seekers in Malaysia fear the police and the government authorities with a deep and abiding anxiety. They have few rights, few avenues of appeal. They live in the community but they are not legally permitted to work or to send their children to government schools.

They can be picked up at any time and held for not having the correct documents at hand. They live in poverty, exploited by employers, fearing expulsion. 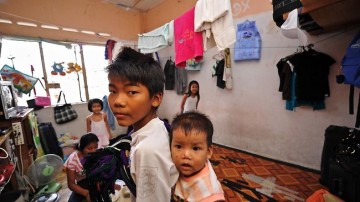 A family of Chin refugees from Burma lives in a cramped flat in Kuala Lumpur, trying to eke out a living while keeping under the official radar. Picture: John Ishii Source: The Australian

Malaysia’s immigration detention centres have been roundly criticised for years and Amnesty International has been particularly exercised about the tendency of Malaysian authorities to cane asylum-seekers, a long and agonising beating that rips into the flesh and leaves scars.

In March this year, Amnesty noted that the Malaysian government has said as many as 30,000 foreigners have been caned between 2005 and last year.

Across Malaysia, government officials regularly tear into prisoners with rattan canes delivered at up to 160km/h, according to an Amnesty report last year.

“The cane shreds the victim’s naked skin, turns the fatty tissue into pulp and leaves permanent scars that extend all the way to muscle fibres.”

This is the environment into which Australia is sending 800 asylum-seekers, one element of a deal struck with Malaysia and announced at the weekend following six months of international negotiations.

Ever-mindful of the electoral fallout of the unstoppable flow of asylum-seekers, the Gillard government is also on the point of reopening the Manus Island detention centre in Papua New Guinea.

In return for Malaysia’s acceptance of the 800, Australia will resettle 4000 recognised refugees from Malaysia within four years. Australia will fund the deal, which has already drawn flak from all sides; condemned as a poor five-to-one deal by the Coalition and cast by the Greens as characterising the government’s “inhumane” policy towards asylum-seekers.

The Malaysian press has been muted in its coverage of the deal, but the UN High Commissioner for Refugees is cautiously optimistic about the plan, which at least has the merit of providing a secure and stable home for 4000 people who have been drifting in limbo for years. The deal will have an effect on refugee numbers in Malaysia, where UNHCR officials say only about 8000 to 10,000 refugees have been resettled in other countries in the past few years. The US takes the most refugees from Malaysia, but other nations such as Australia, Canada, New Zealand and Denmark have also accepted resettling refugees.

Myo Min Latt, 34, a Burmese man who prefers to use an assumed name when talking to the press, knows all too well the difficulties of living a life below the radar in Malaysia, avoiding the authorities and trying to stay out of trouble. Seemingly shy, with a low voice and a habit of looking at his feet, he says he wants to tell his story. He is enthusiastic about the news of the immigration deal.

“I want to move to Australia, I like Australia,” he says, smiling. “So many Asian people stay there.”

Waiting at the UNHCR office in a leafy section of Kuala Lumpur, he insists he has never done anything criminal, but he has twice been detained in an immigration detention centre and once given a punishment of four strokes of the cane. Now he has a UNHCR card, but he still dices with the rules, working illegally in a restaurant to earn the cash to feed his wife and himself.

He winces when he talks about the caning. “I had no documents,” he says. “That was all.”

Amnesty deplores the punishment of caning.

“Since 2002, when parliament amended the Immigration Act 1959/63 to make immigration violations such as illegal entry subject to caning,” the organisation says in a statement, “tens of thousands of refugees and migrant workers have been caned.”

Malaysia is not a signatory to the UN Convention on Refugees, despite much encouragement to join up through the years, so there are no international standards it must adhere to regarding refugees.

The Malaysia-Australia resettlement plan apparently includes agreement by both governments that the transferred asylum-seekers will be “treated with dignity and respect”, and UNHCR understands from the government’s statement that if the asylum-seekers are detained in an immigration detention camp, it will be for only a limited time for identification checks.

But human rights organisations such as Amnesty are not convinced. In a statement Amnesty International Australia’s refugee spokesman Graham Thom says Malaysia uses state-sanctioned vigilante groups to round up foreigners, and warns that people are dying in detention camps from diseases spread by rat urine.

“The number of refugees coming to Australia is tiny by international standards and does not warrant sending 800 people into this situation,” he says.

“This is clearly a political decision that is not in the best interests of refugee protection.”

A Malaysian photographer remembers the despair at Semenyih: “I was here years ago,” he says. “It was very bad.”

Malaysia has a troubled history with refugees. Mass deportations of refugees, including Indonesians and Vietnamese in the 1990s, led to riots in badly overcrowded immigration detention camps. At least one police officer and eight detainees were killed in the riots, many were injured, and the Malaysian government refused to allow UNHCR access to the camps.

But, more recently, it’s generally agreed that Malaysia has lifted its game. In the past year or so, there have been no reported attempts to deport Burmese refugees to the border with Thailand, fewer immigration raids and fewer arrests of registered refugees.

A UNHCR spokeswoman in Kuala Lumpur, Yante Ismail, says nine in 10 refugees and asylum-seekers in Malaysia are from Burma, mostly the persecuted Chin minority, who are mostly Christian, and the even more maltreated mostly Muslim Rohingya. They have found a haven of sorts in Malaysia, but it’s far from ideal, she concedes.

“There are no legal systems in place to deal with refugees, that’s the crux of the matter,” she tells The Australian.

But she later insists that despite the impression left by numerous reports criticising the state of refugee affairs in Malaysia through the years, the situation is getting better. “Even in the absence of proper laws, there is already movement towards improving conditions on the ground,” she says.

The Chin asylum-seekers have flocked together and formed a ghetto of sorts in Kuala Lumpur’s Imbi district, a short walk from the gleaming skyscrapers of the city’s premier hotels.

They have set up a refugee centre in a dilapidated apartment building, where a staff of eager young men work to help the people of the community. A picture of Jesus sits on a grimy wall above the centre’s door and children run around, shrieking with laughter.

Patrick Sang Bawi Hmin is the committee’s medical co-ordinator. He says the community now has largely heard about the refugee deal, which has created a lot of excitement. Australia already accepts some Chin refugees each year, he says, but the potential of a substantial increase in the numbers has set people to wondering whether they could be next, whether they could live in peace and without fear of police raids.

“I would like to study in Australia,” he says, in remarkably fluent English. “I know the education system is good.”

Like other Chin, he rejects the notion of returning to Burma, where the ruling generals transferred power to a new and nominally civilian government early this year. He does not trust the new government, which is dominated by serving and recently retired military officers, and he fears reprisals.

Malaysia is home to more than 90,000 refugees and asylum-seekers, mostly Burmese. The remainder come from Afghanistan, Iraq, Somalia, Sri Lanka and other nations. But in reality there are many more non-Malaysians in the country.

A total of perhaps 1.5 million people in Malaysia are considered undocumented migrants, many labourers from Indonesia who have slipped into Malaysia to earn some money.

Ismail says it’s inaccurate to suggest that improving the rights and circumstances of asylum-seekers in Malaysia will markedly increase the influx. It seems unlikely, then, that the news that Australia will accept more recognised refugees will materially affect people’s decision to flee their native land one way or the other.

“The movement of people is rarely that simplistic,” she says. “It’s a need to save their lives, a deep compelling urge to get themselves out of danger.”

She explains refugees’ decision to flee comes more from a push factor in their native land than anything else.

The Rohingya, for instance, are the second largest group from Burma to flee to Malaysia. Denied full citizenship, education and travel rights in their native state, where they are routinely harried and harassed, there is little they can do to improve their lot bar leaving their homes for an unsure reception elsewhere.

Refugees International claimed in a recent report the Rohingya were one of the most persecuted groups in the world. At least 200,000 have fled from Burma to neighbouring Bangladesh, where only about one-tenth are recognised as refugees by Bangladesh’s government and where most live in squalor.

Many Muslim Rohingya try to flee by boat to Muslim-majority Malaysia to seek work.

At the UNHCR office in Kuala Lumpur earlier this week, Rohingya man Kobir Ahmad Bin Abdul Shukur was seeking help. Slight and nervous, he had just heard his brother had been arrested because he didn’t have the correct documents.