Staying overnight in an ancient garage might not be everybody’s idea of fun. But this isn’t the standard suburban garage found in most countries in the world, stuffed higgledy-piggledy with tins of paint, bits of bicycle, bottles of oil and screwdrivers.This is an Edwardian-era mews, used for sheltering carriages and providing accommodation for syces or drivers in times gone by. Now the grade 2 listed building in downtown George Town, Penang, has been stylishly refurbished and transformed into a sleek and carefully appointed boutique hotel — a triumph of minimalist design punctuated with pieces of Peranakan (Straits Chinese) china. 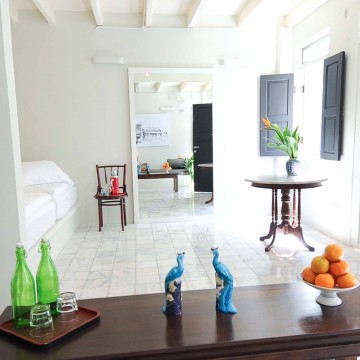 Uber-modern art and appliances mingle with nostalgic ornaments; clever touches like a brilliant red tea-cosy basket, with room for the teapot and two tiny cups, or a delicate blue and white porcelain bowl.  Tiled floors keep the rooms cool, and billowing mosquito nets add a touch of drama. Aimed at today’s “flashpackers”, the hotel also has complimentary wifi, and guests are left with a small mobile phone to make local calls.
Each of the tiny hotel’s nine “suites” includes a substantial sitting area, an all mod-cons bathroom, art and mirrors on the walls, and a flat-screen television, in our room mounted next to the bed. The rooms on the upper row open onto a balcony and those on the lower level front on to a deck adjoining a strip of lush tropical garden.

Muntri Mews is in the heart of the crumbling colonial charm of inner-city George Town, listed by UNESCO as a World Heritage site. Named for Britain’s mad King George III, George Town was Britain’s first colony in Malaysia (not counting an obscure island somewhere off Borneo). In 1786 the Sultan of Kedah leased Penang to the British East India Company, and by the early 1800s George Town was rapidly becoming a thriving and cosmopolitan trading hub and the construction of the city’s array of shophouses, terraces and civic buildings had begun in earnest.

The narrow Muntri Mews hotel fronts on to historic Muntri Street itself, once an upper-middle class enclave with its rows of picturesque terraces, and now home to a Chinese temple, a tiny bar, a long-standing and quiet brothel, a pizza and pasta shop and, on the corner, the Hong Kong Shoe Shop, where Jimmy Choo grew up and learned his trade.  From Muntri Street, visitors can amble over to Chulia Street to sample street-market hawker food, wander down to the wharves or head towards the razzle-dazzle of Little India, where more is always better and the music rattles your heel-bones.

Owned by Christopher Ong, the highly-regarded Penang-born hotelier, Muntri Mews is a labour of love. A former banker, Ong and his partner Karl Steinberg won international recognition with two earlier hotels: Clove Hall in Penang and Galle Fort in Sri Lanka. Both have now been sold and Ong and Steinberg are concentrating on their latest project, a yet-to-be-opened (subs opening Nov) luxurious hotel just down the street, a construction based on seven elegant terraces, as well as overseeing the smooth operation of Muntri Mews.

Ong’s great-grandfather was born in the property next door to Muntri Mews and he played along the side passage as a child. In 1959, the owner had left the building to his children, along with a number of other properties: but according to the terms of his will they were forbidden to sell for 50 years, and rent control regulations depressed the income. Ong can remember ice being sold from the front of the building, and a number of workers living in what had become a slum. When he bought the property it was horribly run down.

Now it is a decorative element in the storied tapestry of Muntri Mews and historic George Town. The UNESCO listing may prevent the destruction of buildings and determine whether certain renovations are suitable or not, but it hasn’t fundamentally altered the nature of the precinct, Ong says. “People still live and work here,” he adds. “It’s not a museum”.

And if it’s time for something to eat?

Café Mews, at the street-side of Muntri Mews, runs to both eastern and western food; coconut and fish laksa, fish (grilled seabass) with coconut rice, and rendang – Indonesian-style slow-cooked beef. Visitors hankering for a western standby after Penang’s explosion of eastern tastes might choose a chicken pie and a bottle of Belgian beer.

Breakfast could be a ham, cheese and tomato croissant and a latte, and maybe a pineapple and mint frappe or a glass of apricot guava iced tea. Lots of locals, especially those who have spent time in the west, drop in for a cup of coffee at the café and sit at their ease at its marble-topped tables and wicker chairs. The staff are friendly and helpful, but don’t try asking for anything in Malay – they are mostly not locals and they hail from any number of nations including Thailand, Nepal, Myanmar and the Philippines.