It was after midnight when the patrolling forest guards first saw them. Five poachers crouching in the jungle, tense and braced for trouble, ready to slaughter a rhino in one of India’s premier national parks. They had crept in from the north as the monsoon flood-waters ebbed, willing to risk death for the precious horn.

The guards lifted their rifles and the night exploded in a hail of bullets. Two of the poachers were killed outright; two escaped, running into the night. The remaining survivor was gravely injured, shot in the leg and in the shoulder. He fled alone, crashing through the dense vegetation, leaving a blood spoor like a wounded beast.

It seems he had no shoes, or maybe he lost them somewhere in the jungle, but he ran for at least an hour, the guards close behind him. When they caught up with him, they shot him dead. Photographs of his corpse show a lean and muscular young man with a pleasant face, wearing a t-shirt and pale blue jeans.

He and two of his companions paid the ultimate price for hunting protected animals. Killed in late September in Kaziranga national park in the north-eastern Indian state of Assam, their bodies have yet to be claimed. 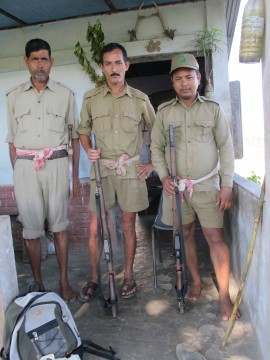 A remote state in a region sandwiched between China, Burma, Bhutan and Bangladesh, Assam is a bloody battleground in the world’s poaching wars. In 2010, the officers working in the state’s protected forests, including Kaziranga, were given immunity from prosecution if they killed suspected poachers inside park boundaries. “They come to kill and they get killed,” one guide says with satisfaction.

Forest ranger Atiqur Rahman led the team that gunned down the three poachers. He insists the poaching gang started that particular fight, spotting the guards and firing a single shot. Rahman has been in the job for two years or so, and in 2010 he led another patrol into the central range and four poachers were shot dead. He says rangers mostly have no choice about firing – it is difficult for them to know how many guns the poachers are carrying and how willing they are to use them. But no-one can remember a forest guard being killed by a poacher.

The young man they shot as he tried to flee might have been armed, Rahman says, with a shrug. “My staff didn’t know; but after they shot him, then they knew he had no gun.”

Kaziranga is home to a thriving population of rare one-horned rhino, an animal smaller than the African rhino, but very aggressive, and happy to chase jeeps and head-butt them, bite rangers and charge almost anyone or anything. Rhinos aren’t afraid of much, and the poachers use their aggression against them.

A noise or a disturbance will catch the attention of a targeted rhino, which will lower its head, ready to charge. The poacher will then shoot it through the skull. The poaching gang will then race to hack off the beast’s horn with an axe. If the shot has been heard, the poachers usually only have about 15 minutes. They often take an ear, or a toenail, as well, as proof that the horn is genuine. Occasionally the shot is botched, and the beast survives, hornless, for a short while before dying.

More than 2,200 endangered one-horned rhinos live in Kaziranga’s lush grasslands, grazing amicably with water buffalo, deer and wild elephants. Rhino calves are sometimes killed by the park’s tigers, but the most threatening predator for the one-horned rhino is a man with a rifle.

Sold mostly to Chinese buyers, the horn is a valuable commodity. Wealthy Chinese consumers believe it has unique health-giving properties. Poachers can earn thousands of dollars for a few days’ work. Assam is one of the poorer Indian states, with an average per capita income of about 30,000 rupees or less than $560 a year. A rhino horn represents enormous, impossibly tempting wealth.

The divisional forest officer in charge of Kaziranga, DD Gogoi, is in charge of the battle against poachers, and he is annoyed by the suggestion they should be given more of a chance to surrender before being shot dead. Sitting in his office in the Assamese town of Bokakhat, he wants to make it clear that rangers and forest guards who shoot at poachers are entirely within their rights.

“Here officers use arms when performing their duties,” he says. “The arms are provided by law. When there’s a shoot-out, we are performing our duty. Sometimes that kind of encounter is wrongly interpreted. If someone is there to experience the situation, it’s quite difficult, you know; it’s a do or die situation.” Anyway, he adds, many poachers are not killed, but rather detained, pointing out that fourteen poachers were arrested in 2010. He declines to produce statistics of poacher deaths.

When Assam’s forest minister, Rockybul Hussain, arrives to open the park in late October, Gogoi is in anxious attendance. Hussain, too, says there is no problem killing poachers – it is entirely legal for forest guards to shoot to kill. It’s a widely-held point of view around Kaziranga, where rhinos are popular with the wealthy tourists whose presence in Assam is a blessing for many in the local economy. 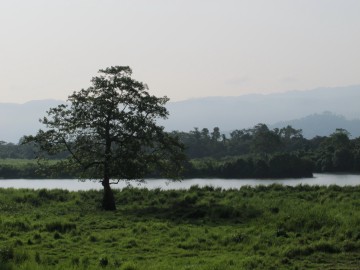 Poachers have been feeling the pressure. In a formal ceremony in October, 25-year-old Jogendra Sahro handed over a Lee Enfield 303 rifle to Kaziranga’s forest guards, declaring he wouldn’t hunt rhino again. A member of the Mishing tribe, who mostly earn a living fishing and labouring, Sahro lives in a leaf-thatched hut just outside the park.

As the trumpeting of wild elephants fills the air he admits to killing one rhino (the reality, apparently, is more like five). With his friend, 30-year-old Sukdeo Kutum, also a Mishing man, he negotiated a complicated deal some years ago with some Naga hunters from Nagaland, an Indian state on the Burmese border. He was given the rifle, but failed to produce any rhino horn, and he says that he was eventually held hostage by the Naga for six days while Kutum brought a rifle – a sort of ransom – to Nagaland.

The Naga are fierce warriors and hunters (and, last century, headhunters). Many of the poachers killed in Kaziranga are thought to be Naga, including two of the three killed outright in September. The third, who ran away before he was shot dead, was probably a low-caste Assamese local hired as a guide. Some Assamese say the Naga will kill anything that moves, which is why there is nothing much left to hunt in their own state, “nothing, no birds, nothing” one guide says angrily.

The poachers who frequent Kaziranga are almost without exception hunting for rhinos, although the park is also home to a thriving population of Bengal tigers, and tiger bones are also valuable on the black market.

Neither Sahro nor Kutum have any idea of why the horn is so valuable, nor what it is used for. They don’t really care. Neither can read or write and they are mostly concerned about their own lives, how to make a living, how to feed themselves and their families. 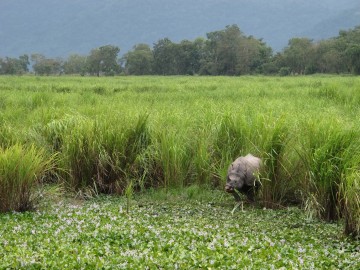 Kutum has three children, and a cloud of gloom descends on him as he talks about the future. “I started poaching five years ago, I was 25 when I started,” he says, fidgeting with his hands. “I did it because of money. My family’s background is very poor. I have two daughters and a son. I don’t have paddy land for cultivation; sometimes I fish in the river, but it’s very tough to earn a living. Sometimes I work carrying milk.”

He pauses, seemingly reluctant to confess his crimes to a stranger. “Then, two years ago I went into the national park to kill a rhino. The rhino charged us. We shot it, and then we had five to ten minutes to cut the horn off.”

He won’t admit to any more rhino killings, but he says he was always worried about being shot dead by forest guards. “I’m scared of the forest department staff, not the animals. We are very familiar with wild animals. But I know people who have been killed by forest guards. Naren Pegu, he was my brother-in-law. He was a wanted man.” Pegu, apparently a gang-leader and wanted poacher, was shot dead by Kaziranga forest guards just over a year ago, in December 2010. His companion was shot in the hip, and later apparently “died of his wounds”.

Uttam Saikia is one local who disapproves of shooting poachers dead. A television journalist and an honorary warden of Kaziranga, he loves the park and works hard to protect the district’s spectacular range of birds and animals. But rather than killing poachers, he thinks they should be educated and rehabilitated. Slight, with an easy grin, Saikia is the voice of reason.

“Actually I’m working for anti-poaching activities,” he says. “We are making a network; to bring the poacher back to the mainstream.” Saikia says he has so far convinced 17 poachers, including Sahro and Kutum, to hand in their weapons and mend their ways. He isn’t paid for the hours he puts in, and it can be a risky business. One Mishing man told him, with weighty innuendo, that he kept a pistol to kill informers.

The forest department relies a network of these locals who are willing to provide information on poachers if the price is right. It can get seem almost lawless. Saikia says informers are paid more if their information leads to an arrest, the capture of a 303 rifle, or the killing of a poacher. They get less money if their lead points merely to a handmade gun.

As well as working on locals to give up poaching, Saikia has kept a wary eye on the poaching gangs of Nagaland. He speaks of men like Bijoy Thapa, originally from Nepal; a Naga man known as Hoho, and others, all trading in protected species. “There’s numbers of gangs sitting there,” Saikia says. “They are not only responsible for killing rhino, they collect the animal parts of the north-east, tiger parts, deer; they send all to the China market.”

He regularly protests when he thinks people have been hastily shot dead in the park. He went to see the place where the wounded poacher was killed in September. “I’m always protesting about this kind of killing,” Saikia says. “He was sheltering in a small bush. I went to the spot and saw it.  It happened in the very early morning, maybe 3am. They just shot him. They should say ‘hands up, hands up’, why not?”