Toxic, prolific, and much hated: Invasive cane toads are on the march from Australia’s eastern seaboard, westward through the tropics of the Northern Territory and on towards the Indian Ocean. Experts now believe the toads will have traversed the entire continent of Australia within the next five years, traveling about 4,000 km — a remarkable feat for an amphibian originally from South and Central America.

Scientists have yet to come up with a way of eliminating the poisonous toads, but new experiments with sausages made of toad meat to “teach” other animals that eating the toad would make them ill, has given conservationists hope of saving those Australian carnivores hit hardest by the warty pests.

Measuring a maximum of about 24 cm in length, the toad invaders have seized victory in Australia by sheer force of numbers. First imported from Hawaii in 1935 to control the cane beetles that were munching through the sugar cane plantations in the northern state of Queensland, cane toads have become a much-cited example of the potential hazards of bio-control. Finding Australia to their liking, the cane toads settled in, their population burgeoned and their range kept expanding — west, and less rapidly, south.

Australians have not taken the invasion lightly. The toads have been run over with cars, bikes and lawnmowers, whacked with cricket bats and golf clubs, and frozen to death in fridges and freezers, but still they keep coming. Because they are such prolific breeders, with sometimes 40,000 eggs in a clutch, cane toads, or Bufo marinus, can afford to take lots of casualties.

Packed with poison, in glands above their eyes and, in the males, throughout their skin, these toads have made short work of some of Australia’s native carnivores. The native meat-eaters take one hungry bite and then drop dead from a heart attack induced by toad toxin. The goanna — a big lizard; the carnivorous northern quoll — a marsupial; and the freshwater crocodile have all been hit hard by the warty invaders, losing substantial proportions of their populations to the toads.

At least A$21 million ($15.7 million) in federal government funds has been spent trying to find a way to hold back the creeping toad tide, but so far to no avail. 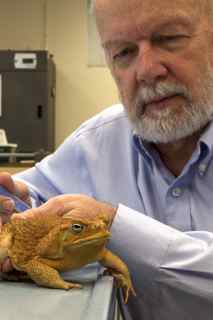 Professor Rick Shine, a biologist at the University of Sydney who has been studying the feral amphibians intensively for 10 years, told the Nikkei Asian Review that cane toads were virtually unstoppable. “The [Commonwealth Scientific and Industrial Research Organisation] spent A$12 million trying to develop a virus to kill cane toads,” he said. “They abandoned it in the end.”

Scientists have experimented with toad pheromones in baited traps to catch toad tadpoles, he said, and considered using a lungworm that the toad has brought with it to control adult toad numbers, but there is an understandable reluctance to use bio-control without substantial and long-term research into its possible long-term problems.

“When we play God with complex ecosystems, it’s really pretty tricky stuff,” Shine said. He pointed out that cane toads had now been in Queensland for 80 years, and the ecosystem had adapted to them, with a number of rodents, birds and insects eating them. If the toads were suddenly removed entirely, the entire system would be pushed off balance again.

Australia has a long and tragic history of introduced animals competing with native species and becoming feral pests. The newcomers encroach on the natives’ habitat, take their prey, or simply kill and eat them; in many cases pushing the native species to extinction. Cats, foxes, rabbits, ferrets, horses, goats, even camels — all have become damaging introduced pests, breeding prolifically and taking their toll on native animals.

While there is some affection for the wild horses, known as brumbies, and even for feral cats in some quarters, there is active dislike of the cane toad. Australians have taken to “toad-busting” with alacrity, and in West Australia backpackers can even earn visa credits by helping to catch and destroy cane toads.

Yet nothing has stopped the amphibians’ steady march. Their progress westward across the Australian mainland has an almost military feel, and this in turn has spawned the toad sausage strategy.

“The invasion front of the toads is dominated by these very large storm-troopers,” Shine explained. “They’re big adult toads, and they’re moving very quickly.” This essentially means the first cane toads Australian carnivores are likely to encounter are the larger, more poisonous type — which will almost certainly kill them.

If the native species first took a bite of a small toad, the poison would be less dangerous and the carnivore would learn to avoid the taste and smell of toad. Hence the experiments with sausages made of cane toad meat and laced with a nausea-inducing emetic — to ‘teach’ native carnivores to avoid cane toads, by making them sick, without killing them.

“You clearly can’t do this on a landscape scale, in a way that will save all the predators,” Shine said. “But you can create pockets of surviving predators, like goannas, quolls and so on, that can colonise the surrounding areas after the toad front has passed”.

Shine has been working with Corrin Everitt, West Australia’s cane toad strategy leader, in the Kimberley region, in the far north of the state. Trials of the cane-toad sausage have proved successful, Everitt told the Nikkei Asian Review, and she and her colleagues were now waiting for funding in order to use the sausages on a broader scale.

Meanwhile, enthusiastic Kimberley residents have been collecting toads for the sausages, which are processed and made into sausages in a factory in Harvie, in the south of the state. “If they want to go toad-busting, they can leave the toads in our drop-off boxes and we will euthanase them,” Everitt said.

She and Shine hope the sausages will help prevent some of the ill-effects of the cane toad invasion, without creating any new unforeseen ecological disasters. “We’re trying to make sure we don’t create problems,” Shine said. “The story of the cane toad is the story of scientific stupidity. I don’t want to be the academic grandson of Reg Mungomery, the man who brought cane toads to Australia.”